The Changing Needs of a Cell: No Membrane? No Problem! | Biomedical Beat Blog - National Institute of General Medical Sciences

The Changing Needs of a Cell: No Membrane? No Problem! | Biomedical Beat Blog - National Institute of General Medical Sciences

Russian nesting dolls. Credit: iStock.
How “membrane-less” organelles help with key cellular functions
Scientists have long known that animal and plant cells have specialized subdivisions called organelles. These organelles are surrounded by a semi-permeable barrier, called a membrane, that both organizes the organelles and insulates them from the rest of the cell’s mix of proteins, salt, and water. This set-up helps to make cells efficient and productive, aiding in energy production and other specialized functions. But, because of their semi-permeable membranes, organelles can’t regroup and reform in response to stress or other outside changes. Cells need a rapid response team working alongside the membrane-bound organelles to meet these fluctuating needs. Until recently, who those rapid responders were and how they worked has been a mystery.
Recent research has led biologists to learn that the inside of a cell or an organelle is not just a lot of different molecules dissolved in water. Instead, we now know that cells contain many pockets of liquid droplets (one type of liquid surrounded by a liquid of different density) with specialized composition and function that are not surrounded by membranes. Because these “membrane-less organelles” are not confined, they can rapidly come together in response to chemical signals, such as those that indicate stress, and equally rapidly fall apart when they are no longer needed, or when the cell is about to divide. This enables membrane-less organelles to be “rapid responders.” They can have complex, multilayered structures that help them to perform many critical cell functions with multiple steps, just like membrane-bound organelles. Scientists even suspect that the way these organelles form as droplets may shed light on how life on Earth first took shape (see sidebar “Could This Be How Life First Took Shape?” at bottom of page).
The Many Membrane-less Organelles
Scientists have identified more than a dozen membrane-less organelles at work in mammalian cells. Several kinds found inside the nucleus—including nuclear speckles, paraspeckles, and Cajal bodies—help with cell growth, stress response, the metabolizing (breaking down) of RNA, and the control of gene expression—the process by which information in a gene is used in the synthesis of a protein. Out in the cytoplasm, P-bodies, germ granules, and stress granules are membrane-less organelles that are involved in metabolizing or protecting messenger RNA (mRNA), controlling which mRNAs are made into proteins, and in maintaining balance, or homeostasis, of the cell’s overall health.
The nucleolus, located inside the nucleus, is probably the largest of the membrane-less organelles. It acts as a factory to assemble ribosomes, the giant molecular machines that “translate” messenger RNAs to make all cellular proteins. 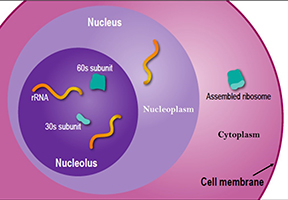 The nucleolus is a large organelle without a membrane that forms in the cell nucleus. Scientists have learned that the nucleolus (pictured here) actually contains three layers, separated not by membranes but by differences in surface tension, much like a mixture of oil, water and certain types of alcohol will naturally settle into three layers. The rRNA starts in the central layer and works its way outward, receiving modifications along the way. The completed subunits travel out of the nucleus to the cytoplasm to assemble into ribosomes. Credit: NIGMS.
The rate that ribosomes are assembled allows cells to regulate their growth and activity. Behind this growth is the nucleolus. It can increase ribosome production to allow for more growth, such as when the cell is preparing to divide in two or halt ribosome production to respond to changes in the cell’s environment, such as those brought on by stress. Recently, scientists found that, at least in some animals, the nucleolus itself grows in parallel with the growth of both the cell and the organism. Its growth levels out as the organism reaches maturity, when the cell no longer needs an increasing number of ribosomes to produce proteins. As a membrane-less organelle, the nucleolus has the flexibility to respond quickly to changes in the cell’s environment. And with its prominent role in cell growth it’s believed to be at the center of many human diseases. For example, it may be a good target for cancer treatments, because out-of-control cell growth and enlarged nucleoli are hallmarks of cancer.
Free-Flowing Proteins
Imagine a lava lamp with its slowly flowing colored globules. Those drops of color can maintain clear separation from the surrounding liquid because they contain molecules that are electrostatically attracted to each other, like the static electricity that causes two socks just taken out of a dryer to weakly cling to each other. They condense to form a separate droplet, or phase. This is known as phase separation, and membrane-less organelles follow the same principle. 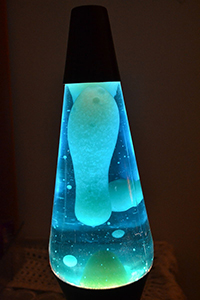 Lava lamp. Credit: Wikimedia Commons, Risa1029.
Membrane-less organelles only exist temporarily and there needs to be a mechanism to both bring them together (condense them) and separate them when they’re no longer needed. Richard Kriwacki and his colleagues at St. Jude Children’s Research Hospital in Memphis, Tennessee, have discovered that a protein called nucleophosmin (NPM1) helps the chemical building blocks of the nucleolus phase separate to form a droplet. NPM1 acts as a glue, forming loose networks with many different proteins and RNAs. The researchers believe such networks are necessary for the proteins and RNAs in the nucleolus to condense and separate in response to stress. These findings provide the first insights into the role of NPM1 in the molecular organization of the nucleolus. The next challenge is to understand how this organization promotes the production of ribosomes and helps the cell to respond to stressful situations.
Kriwacki and his colleagues also found recently that NPM1 is among the targets of toxic “repeat” polypeptides that are produced in amyotrophic lateral sclerosis (ALS, also known as Lou Gehrig’s disease) and other neurodegenerative diseases. The repeat polypeptides’ structure changes NPM1’s glue-like activity and interferes with the function of the nucleolus. These changes could lead to the rapid deterioration of nerve cells seen in such diseases.
Cell as cruise-director: keeping membrane-less organelles in line and under control
Although they appear to take shape spontaneously, membrane-less organelles are very much under the cell’s control. Cells can raise and lower the concentrations of key structural molecules to affect whether a droplet forms. Ashok Deniz and his colleagues at the Scripps Research Institute in La Jolla, California, recently studied the effects of different amounts of RNA on the formation of membrane-less ribonucleoprotein (RNP) granules, which are involved in regulating gene expression. The scientists found that while initial increases in RNA concentrations play a role in inducing granule formation, further increases in RNA can make the RNP granules dissolve. The phenomenon resembles using Elmer’s glue for an elementary school project: you need to add enough to get one piece of construction paper to stick to another piece, but if you add too much glue, both pieces turn into mush and the project is ruined. This RNA mechanism provides the cell with a simple way to control RNP granule activity. The study helps scientists learn more about how membrane-less organelles form in real cells as well as in artificial (man-made) cells. This could be important because there may be diseases where the treatment could be to ramp production of membrane-less organelles up or down.
Adding single-stranded RNA to synthetic peptides—or chains of amino acids—leads to the formation of RNP granules inside of cells. When RNA levels get too high, the granules are disrupted. Credit: The Scripps Research Institute.
From the Inside Out
Proteins and RNA pooling together, or “condensing,” in response to changing environmental conditions explains how a droplet can form through phase separation, but it doesn’t explain how these membrane-less organelles are able to do complex jobs. Organelle functions, such as ribosome assembly (see figure above), often involve several steps, and they benefit from a complex structure that can separate and organize these steps. Clifford Brangwynne, a biophysicist at Princeton University, and his colleagues found that the surface tension of droplets made of different mixtures of proteins may explain how membrane-less organelles self-organize to do even the most complicated jobs.
Studying the nucleolus, Brangwynne and his team discovered that each layer of proteins and rRNA formed its own droplet, with one nested inside another like a set of Russian matryoshka dolls. One layer did not mix with the others, even when the researchers removed the proteins from cells and tested them on microscope slide cover slips. The different droplets acted like oil and water, co-existing but not actually mixing.
The researchers then learned that the interactions between protein molecules in each layer helped determine each droplet’s surface tension. When a nucleolus forms, the center layer has the greatest surface tension, and each surrounding layer has progressively lower surface tension relative to its surroundings. Using a device that shuttles liquids through millimeter-sized channelsand a new technology they developed called optoDroplet that uses light to induce phase transitions inside living cells, Brangwynne and his group will continue to uncover details about how the proteins in membrane-less organelles undergo phase separation so effectively and how precise protein interactions can be derailed in some diseases.
A new tool, the optoDroplet, lets scientists control the formation of membrane-less granules in living cells using light. As shown here, granules are slow to appear. Then as the light is increased, the number of granules grows dramatically, as if a switch has been turned on. The scientists are using this technique to study what happens when healthy granules appear and dissolve as well as how the process may change when the proteins gather into gels or solids, as they do in diseases such as ALS. Credit: Clifford Brangwynne lab.
Disease Implications
As scientists learn how sensitive membrane-less organelles are to the changing conditions in a cell, they have become interested in these structures’ potential roles in disease. For example, if some proteins found in membrane-less organelles are altered, they can form a more gel-like droplet with less fluid structures. This may affect how well the organelles function, and how easily they can be disassembled, potentially contributing to heart and neurological conditions. Also, cancerous cells often contain bloated and oddly shaped nucleoli that overproduce ribosomes and contribute to cell growth and division that races out of control. Learning more about membrane-less organelles may lead to new ways to influence their function to treat such health conditions.
Sidebar: Could This Be How Life First Took Shape? 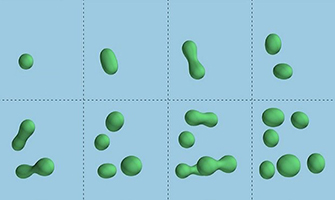 Droplets of chemicals within a primordial soup can stretch and split (top row). The process can repeat (bottom row) to create new generations of droplets, in a process that mimics reproduction and reveals a possible way by which life on Earth first took shape. Credit: David Zwicker et al.,Nature Physics, 2016.
In the early 2000s, scientists began to identify membrane-less organelles and describe how they form droplet structures. These discoveries reinvigorated a hypothesis put forth by Russian biochemist Alexander Oparin in 1924 that the first protocells—the forerunner of the first modern cell-like structures on Earth—were naturally forming liquid droplets rather than membrane-bound compartments. Oparin’s hypothesis received another boost in 2016 when German scientists reported “chemically active” liquid droplets, which cycle molecules in and out of the surrounding fluid and also grow to near cell size and divide