By Kate Bass BScJune 21, 2018
Researchers in Australia have uncovered a trigger for an immune-related cell death pathway called necroptosis. It is hoped that the discovery may provide new targets for the treatment of a range of disorders, including immune disorders and several types of cancer. 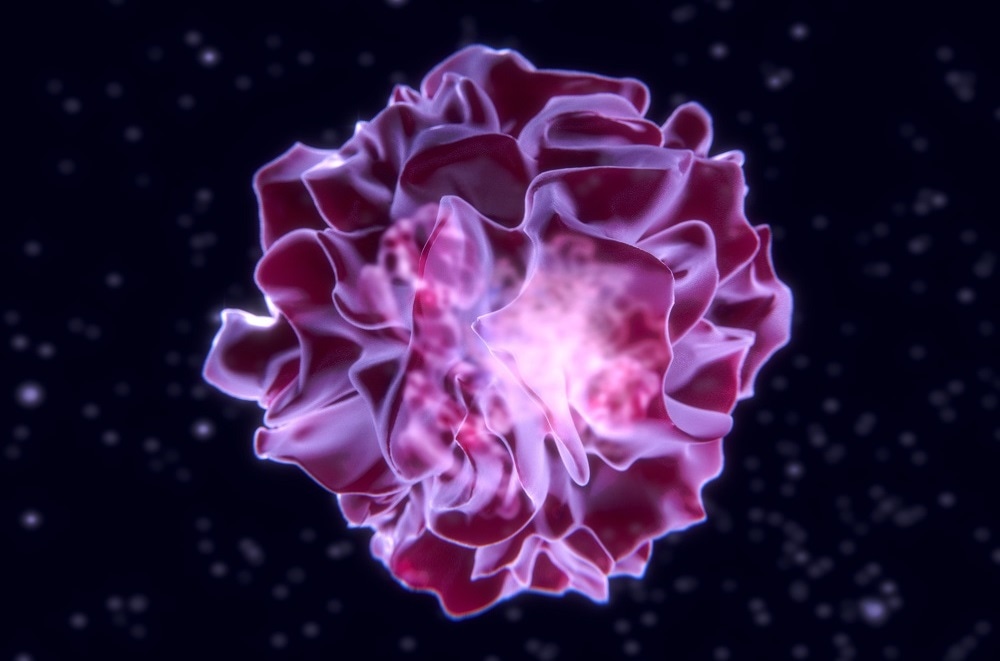 Image Credit: Juan Gaertner / Shutterstock
Necroptosis is a form of programmed cell death occurring in vertebrate cells. It is actioned by immune cells, which rupture cellular membranes to release the intracellular components.
Necroptosis is involved in the regulation of normal embryonic development, T-cell proliferation, and chronic intestinal inflammation as well as being used in response to infection by pathogens that inhibit classic apoptosis.
Excessive or inappropriate activation of necroptosis is thought to occur in a variety of diseases and conditions, including stroke, organ transplant injury and kidney disease, immune disorders and cancer.
Some currently available anti-cancer drugs, called BH3-mimetics, target defects that prevent cells from undergoing programmed cell death. It is hoped that further elucidation of the pathways involved will enable the development of novel anti-cancer treatments.
A key protein in the initiation of necroptosis is the pseudokinase mixed lineage kinase domain-like (MLKL). It has been well studied in several model systems and is known to be activated by phosphorylation by the protein kinase RIPK3.
For the first time, necroptosis and MLKL activation has been studied in human cells to investigate the role it plays in the development of cancer.
A research team from the Walter and Eliza Hall Institute in Melbourne assessed the effect of several MLKL mutations found in human cancers on cell death by necroptosis.

We found that most of the mutations in MLKL in human cancers delayed cell death by necroptosis".
James Murphy, Associate Professor

The team also discovered that the necroptosis pathway in humans has a number of crucial differences from the models used in previous research of programmed cell death.
MLKL is always present in human cells but is tightly controlled so it remains inactive until a problem is detected, and only then will it signal to the immune system to kill a cell. It is beneficial to cancer cells to inhibit this process in order to ensure survival.

Delaying necroptosis may be advantageous to cancer cells, or cells that are pre-cancerous, either by allowing them more time to turn into cancer, making them less responsive to cancer therapies, or not alerting the immune system so quickly to their existence."
James Murphy, Associate Professor

For the first time, the dormant MLKL and activation of the protein through its binding to RIPK3 have been visualised in human cells.

This is the first time that we have been able to visualise how the MLKL protein works in human cells. We showed that human MLKL differs in some critical ways from our model systems, which has significant implications for any attempts to target this pathway to treat disease."
Dr Emma Petrie, Co-Author

Although the team have identified the molecular trigger for initiating necroptosis in human cells and demonstrated its role in cancer development, further research is needed to identify additional checkpoints that ensure the very tight regulation of MLKL inhuman cells.
Importantly, identification of the molecular pathway triggering necroptosis in human cells has provided novel potential therapeutic targets for the development of new treatments for a range of disorders and cancer.
Source:
Walter and Eliza Hall Institute press release 21 June 2108.
Publicado por salud equitativa en 8:48