Earthworms as indicators of soil toxicity

Earthworms make up 60% of soil biomass and play a critical role in the turnover of soil organic matter and nutrients in both natural and agricultural settings. Earthworms live surrounded by soil and ingest soil, complete with any contaminants it may contain. In addition, nutrients and contaminants alike can be passively absorbed through the skin of the earthworm. Any toxicity in soil is thus likely to be found within earthworms. Furthermore, earthworms are typically prevalent in the soil and easy to collect, making them an ideal model for monitoring soil for toxicity1. 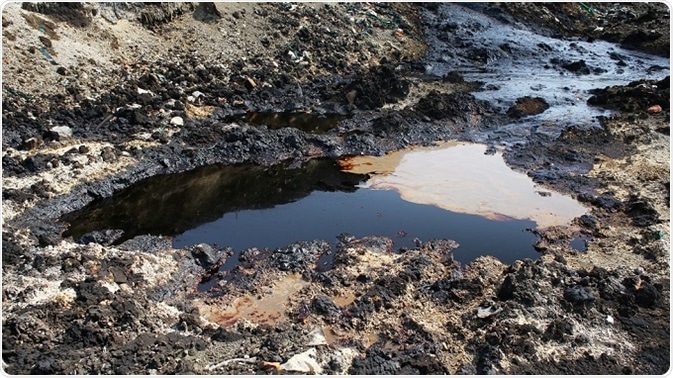 © Tomas Vynikal/Shutterstock.com
The species of earthworm recommended for use in soil toxicity studies is Eisenia fetida, commonly known as redworm, brandling worm, or tiger worm, which thrives in rotting vegetation and manure. Studying the tissues of these worms can highlight any soil contamination that has occurred and give an indication of the effects of the pollution. This will allow the most appropriate and effective action to remedy the situation to be initiated to prevent detrimental outcome.
Accumulation of pollutants in earthworms and their effects on mortality rate, cocoon production and growth in earthworms have been have been routinely used for many years in earthworm-based soil monitoring initiatives3. Although useful, these recommended endpoints can be difficult to relate to real world solutions and do not provide insight into toxicity mechanisms at the molecular level. In addition to effects on survival, growth, development and reproduction, it is necessary to measure specific responses to pollutants, such as oxidative stress or specifically expressed proteins, in order to fully understand the effects of toxicants and their toxic mechanisms. In order to achieve this, study of the biological responses and corresponding biomarkers at the molecular level are needed. Furthermore, the standard parameters may not be suitable for assessing the effects of short-term or low-dose exposure to contaminants.
With the increasing occurrence of heavy metal soil pollution in the soil, it would be useful to detail the extent of their toxic effects on the environment, even at low levels, and the timescale over which the toxicity becomes apparent. A more sensitive method that could facilitate this is now available — metabolomics.

Metabolomics is the study of chemical processes involving metabolites and how the unique chemical fingerprints change in response to specific cellular processes caused by external stressors4. It has been widely used across a range of disciplines, including toxicology and drug discovery. It is now being adopted for the assessment of environmental stress. Metabolomics provides a valuable means of characterizing the time-dependent metabolic responses of living organisms in response to environmental changes, thereby enabling elucidation of the mechanism of action through which contaminants cause toxicity.
High-frequency nuclear magnetic resonance (1H NMR) metabolomics makes it possible to simultaneously measure numerous endogenous metabolites. It thus represents the ideal tool for characterizing earthworm responses to various pollutants5. By assessing such a range of substances, this technique allows investigation of up-stream events, such as modulation of gene expression, in addition to detailing the direct effects of external environmental stimuli. Although it has already been used to assess the toxicity of pesticides6, environmental metabolomics has not yet been used extensively in soil toxicity studies.

NMR in the analysis of earthworm metabolism

A recent study used 1H NMR-based metabolomics to profile the time-dependent metabolic responses of earthworms (Eisenia fetida) exposed to soil contaminated with low levels of lead7.
The worms lived in the contaminated soil for 28 days and extracts from the worms were analyzed using a Bruker AVANCE 500 MHz spectrometer at 298 K after 1, 7, 14, 21 and 28 days of exposure. Lead concentrations within the earthworms were found to increase with increasing exposure to the contaminated soil6. Histopathological damage to the worms was observed, with the 14th day presenting the worst effects. The metabolic effects observed in the earthworms also changed at day 14, indicating that the worm may initiate a detoxification strategy that takes 14 days to manifest. These effects mainly related to systems involved in the regulation of energy, osmotic equilibrium and amino acid mechanisms. Potential biomarkers for the early detection of exposure to lead were identified. These included myo-inositol, 2-hexyl-5-ethyl-3-furansulfonate (HEFS), scyllo-inositol, succinate, alanine and maltose.
The study indicates that 1H NMR-based metabolomics along with metal accumulation and histological detection provide a reliable methodology for studying time-dependent metabolic mechanisms in earthworms. It showed that, when testing for lead contamination, earthworms should be exposed to the soil for 14 days for the toxic effects to be observed. Measurements obtained in metabolomic studies can thus be directly related to practical, real-life scenarios.