In Good Faith: Saving planet, looking within | The Indian Express

In Good Faith: Saving planet, looking within | The Indian Express 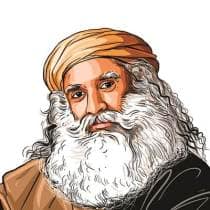 The individual is inextricable from the environment
Sadhguru Jaggi Vasudev

The individual is inextricable from the environment. In India, nothing is accomplished by policy changes alone. Unless people can relate emotionally to something, nothing happens on the ground. So we set about making people understand that a tree is not a project; it is your life. (Representational Image)

We live at a time when human consciousness is so compartmentalised that we have forgotten there is actually no such thing as “environment”. If an individual is willing, he or she can sit here and experience the entire world in one’s self. It is only because that he has not exercised this choice that there is a divide between humanity and environment.
Trees are our closest relatives. What trees exhale, we inhale; what we exhale, they inhale. They are half our respiratory system. Spirituality is not about looking up or down — it’s about looking inward. And the first fundamental fact of looking inward you find is that you are very much a part of everything around you. Without that realisation, there is no spiritual process.
Today, modern science has established that the whole of existence is one energy. Now, this is a dry scientific fact which does not change your life. But the spiritual process enhances your perception to make this fact a living experience. Yoga means union. Union means the boundaries of the individual self-dissolve and you experience existence as yourself. Once this is a living experience, to care for what’s around you as you care for yourself, is only natural.
As a generation, ours has taken the biggest bite of the planet. Whatever we do for the environment today is only compensatory action. It is neither service nor a great achievement; it is a matter of survival. A simple thing we need to look at is the population issue. At the beginning of the 20th century, the population on this planet was 1.5 billion. Today we are inching towards eight billion.
Now, why is someone concerned with ecology talking about population? The problem is that we are always trying to look at life in pieces, which will never work. Ecology and human consciousness cannot be separated.
In 1998, a team of UN experts predicted that by 2025, Tamil Nadu would become a desert. Now, this is probably one of the only parts of the planet that has been farmed continuously for more than 12,000 years. The ethos of agriculture is deep in the Tamil farmer. That this rich land could be a desert seemed inconceivable to me. I don’t like predictions. People make predictions based on statistics and cold figures. They don’t take into account human aspiration. So I decided to just drive around Tamil Nadu and take a look. That’s when I realised that we might not even make it to 2025! Not only have small rivers dried up and homes built on riverbeds, there is not enough moisture in the soil for even palm trees — desert vegetation — to survive.
The immediate thing we took up was reforesting the hill behind the ashram. This particular hill was completely shaved of timber because of an illegal furniture industry. So we paid almost three to four times the land price to buy them out and we put back the trees on the hill. All this took us only about 22 days and 3,000-4,000 people, who joyfully went about planting six million seeds in a certain way.
Then came the more difficult task of planting trees across Tamil Nadu. The first seven years we spent planting trees in people’s minds, which is the most difficult terrain! Now because that’s been done, it is much easier to transplant those trees onto land. The national aspiration is 33 per cent green cover. We were at 16.4 per cent green cover in Tamil Nadu. So we needed approximately 114 million trees. When I mentioned the figure, everyone around me was alarmed. I asked them a simple question: ‘What is the population of Tamil Nadu?’ They said, “Sixty-two million”. I said, “If all of us plant one tree today, nurture it for a couple of years and plant one more, it’s done”.
In India, nothing is accomplished by policy changes alone. Unless people can relate emotionally to something, nothing happens on the ground. So we set about making people understand that a tree is not a project; it is your life. And the commitment and enthusiasm with which simple rural people took this on has been absolutely phenomenal.
So, today when people ask me why trees, I say, “You have heard of people getting enlightened under a tree? I am preparing you; you are all doing your yoga. But where are the trees? The ambience is missing! I’m just providing the ambience.”
The writer is a yogi, mystic, visionary and author
For all the latest Opinion News, download Indian Express App
More From Sadhguru Jaggi Vasudev