By Phoebe Hinton-Sheley
Enterovirus 71 is the RNA virus that causes hand, foot, and mouth disease (HFMD). 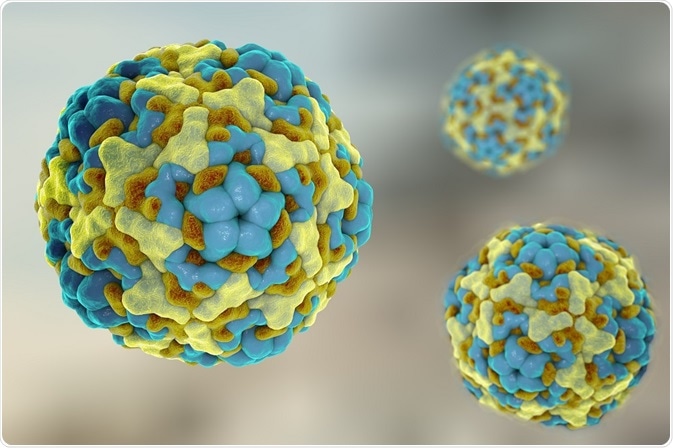 Image Credit: Kateryna Kon / Shutterstock
Enterovirus 71 is usually removed by the body’s immune system within 7 days. However, in extreme cases, it can affect the central nervous system. It can affect both children and adults, and is spread via bodily fluids. It is commonly found in South East Asia, and other parts of the world where hygiene education is lacking.

Enterovirus 71 is an RNA virus, meaning that it evolves at a fast pace. This makes it very difficult to treat using antivirals. It is a picornavirus, meaning that it has an icosahedral shape, with and is a small (22-30nm), non-enveloped particle.
The capsid part of the virus contains an RNA strand consisting of approximately 7,500 nucleotides.  This classification also means that it multiplies in the cytoplasm of infected host cells, with the viral RNA strand instructing the host cell to synthesise the macromolecules required for it to replicate.

Entry and infection of cells by Enterovirus 71

Despite huge research efforts, the pathogenesis of Enterovirus 71 is yet to be fully elucidated. It is thought that the virus binds to specific receptors on the surface of target cells, and enters via endocytosis.
Once inside the cell, three or more viral proteases cleave and activate 11 proteins, which are used to create progeny. These proteins also remodel the cellular membrane and other membranous structures, in order to release the new virions.
A study which took place in 2015 suggested that cellular proteins are massively affected, as well as ion channels, regulation of protein degradation, and other homeostatic processes.
Furthermore, infection of the body’s own immune cells has been observed, where the virus alters the immune response to prevent itself being eradicated. This is only observed in extreme cases of the disease. The exact purpose of the pathological adjustments that EV71 makes to cells, however, is still currently unclear.

General hygiene is the best way of preventing the virus from entering the body. There are no specific medical treatments for people who have contracted HFMD, due to the complexity of the virus and its fast evolution. Therefore, the only medications that can assist in recovery include pain and fever relief, as well as mouthwashes or sprays that numb mouth pain.
A study performed in 1996 did found that a common antiviral used for the treatment of chickenpox, and other picornaviruses, could be used to treat Enterovirus 71 when given to children aged between 1-5 years old, who were displaying the classic HFMD rash. However, due to the fast evolution of Enterovirus 71, this treatment is rarely used, as it is usually ineffective against the newer, recently evolved strains of the virus.
Reviewed by Kate Anderton, BSc