Irreparable failure of the aortic valve occurs in some patients. This requires a type of cardiac surgery called aortic valve replacement in which a healthy functioning valve is used to replace the damaged valve. Two of the common indications for such replacement are aortic valve stenosis and regurgitation, in which the valve refuses to open properly or fails to close tightly. Open heart surgery of two kinds is carried out to substitute these valves.
The first is the use of mechanical valves made from synthetic materials. These valves are very durable and typically last throughout the rest of the patient’s life. They do have the disadvantage of requiring lifelong anticoagulation because of the tendency of blood to clot on them. The second is based on the use of biological or tissue valves, which are removed from animals or human donors, and occasionally from the same patient. They are compatible with human blood and so anticoagulation is not required, but on the other hand they do not last lifelong. Replacement will thus be necessary, about once every 10-15 years if the individual is not very active. The mechanical characterization of these tissue valves is incomplete. This area of study requires to be pursued with respect to each component of the valve.
This article describes the practical importance of measuring the mechanical characteristics of tissue valves with precision. This will help to synthesize biomimetic materials which can be used to make better valves. 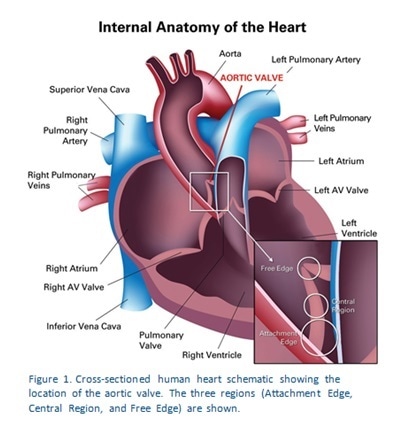 In this experiment, microindentation tests were carried out on three porcine aortic valve samples, using a Hysitron® TI 950 TriboIndenter® fitted with an xZ 500 Extended Displacement Stage. For sample preparation, the valve samples were divided into sections of 500 μm thickness each. These leaflets were then caused to stick to microscope slides using CellTak adhesive (BD Biosciences).
The samples were all placed into phosphate buffered saline (PBS) for in vitro testing, using a feedback mode with displacement control. The instrument used was a diamond fluid cell Berkovich probe to produce peak displacements of about 15 μm. The probe was always placed in out-of-contact position at the beginning of the test, with the sample immersed in PBS. This helped to detect the precise point at which the tissue made contact with the tip of the probe.
In all tests, a hold segment lasting 20 seconds was used. Figure 1 shows how three regions were used to test each of the valve samples. The indentation sites were selected on the basis of the optical microscope fitted to the TriboIndenter. The first region is the Attachment Edge, and is anatomically the site of valve attachment to the aortic wall. The second test is in the Central Region which is the part of the valve that resists the pressure changes that result from the opening and closure of the valves. The third area is the Free Edge, corresponding to the part of the valve which meets with other valve edges to close the valve off tightly.

Figure 2 shows the force-displacement curves generated from each region of the sample named Valve 1, which represent the whole of the results. It is obvious that each of these areas needed different amounts of force to show the same depth of displacement. Figure 3 shows reduced modulus values in all the valve samples in relation to the region tested. Table 1 depicts the reduced modulus results as an average for individual regions of each of the three tested valves.
The results show that the lowest reduced modulus values are seen with microindentation testing of the Free Edge of all the three samples, because of the increased elasticity of this region. This is due to the fact that this part of the valve requires to be highly flexible in order to seal the valve edges during each of millions of cardiac cycles. 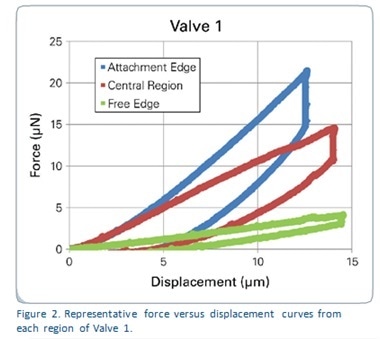 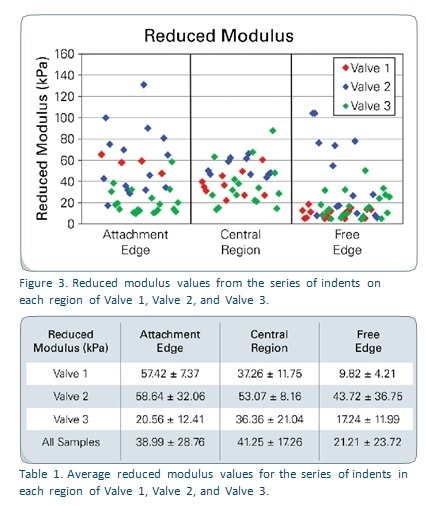 The mechanical characteristics of Valve 2 are superior to those of the other two, as expected from the difference in the way fibers are aligned between different samples. These trends cannot be used to make any predictions or to compare the results with previous studies because of the small sample size.

This was an early experiment using porcine specimens of the aortic valve, and the results may indicate the fruitfulness of this method in characterizing the mechanical properties of soft tissues used in small quantities. The average of the reduced modulus values acquired ranged from 5 to 100 kPa, which agrees with prior values from tensile tests conducted in the circumferential and radial directions, which were between 2 and 4 kPa.
This test needs only a small amount of sample, while the fluid environment makes it possible to perform indentation testing by micro- or nano-indentation even on tissues without significant stiffness. It is possible to study reduced modulus values, stress relaxation, hysteresis and properties which are time-dependent, in aortic valve tissue.

Bruker manufactures world class atomic force microscopes and other nano technologies that incorporate the very latest advances in AFM techniques, including the revolutionary ScanAsyst™ AFM imaging mode and the PeakForce QNM® atomic force microscopy imaging mode to ideally suit a wide array of application areas, from biology to semiconductors, from data storage devices to polymers, and from integrated optics to measurement of forces between particles and surfaces.
Sponsored Content Policy: News-Medical.net publishes articles and related content that may be derived from sources where we have existing commercial relationships, provided such content adds value to the core editorial ethos of News-Medical.Net which is to educate and inform site visitors interested in medical research, science, medical devices and treatments.
Last updated: Jun 20, 2018 at 8:11 AM
Publicado por salud equitativa en 7:45