Providers are Treating Gonorrhea as CDC Recommends
for Majority of Patients 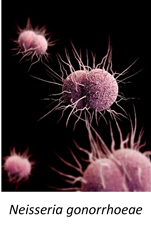 A recent CDC MMWR report shows that providers treated 81% of patients diagnosed with gonorrhea using CDC’s recommended dual therapy. While encouraging, nearly 1 in 5 patients were treated with a different regimen, signifying room for improvement.
Antibiotic resistance is making gonorrhea much harder to treat. Recommended treatment involves a combination of two drugs, an injection of ceftriaxone and an oral dose of azithromycin, to potentially slow the emergence and spread of drug resistance.
The report, titled Adherence to CDC Recommendations for the Treatment of Uncomplicated Gonorrhea, STD Surveillance Network (SSuN), 2016, found that a majority of cases treated with other regimens were treated with monotherapy. This could accelerate antibiotic resistance and increase the possibility that the patient may not be cured of the infection.
Take Action
CDC works to strengthen the ability to detect and respond to drug-resistant gonorrhea with comprehensive support nationwide. Learn more about these efforts to combat the threat of antibiotic resistance.