By Akshima Sahi, BDS
Campylobacteriosis is an infection in the small intestine which causes gastroenteritis. It is caused by the bacterium, Campylobacter jejuni. 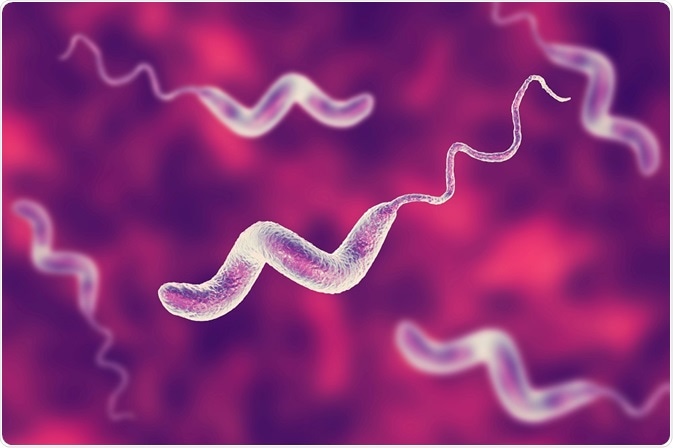 Credit: Kateryna Kon/Shutterstock.com
Campylobacteriosis is usually  mild condition that can be treated using antibiotics.  However, left untreated, it can be lethal. It is particularly dangerous if contracted by young infants, the elderly and patients with a compromised immune system.
Every year, around 1 in 10 people are affected and 33 million people die due to  foodborne diseases, including campylobacteriosis. This infection is the fourth biggest cause of diarrhea-related diseases worldwide.
Campylobacter jejuni has a spiral, rod-like, curved structure. It is one of 17 different species of Campylobacter, and scientists have identified 6 subspecies of Campylobacter, the most common being C. jejuni and C. coli.

If left untreated, Campylobacteriosis can lead to more severe diseases, such as:

Camylobacteriosis can be contracted from various sources, including contaminated fresh foods, unpasteurized milk, undercooked or contaminated poultry or contaminated drinking water.
The biggest source of Campylobacteriosis is a patient with the condition. An infected individual can spread the infection through their feces for up to 2-3 weeks post-infection. The chance of infecting another other individual decreases once the patient recovers from diarrhea.

Campylobacteriosis diagnosis involves the use of a laboratory test known as PCR (polymerase chain reaction) test. This test amplifies the presence of bacterial DNA present in the patient’s stool or blood and so that it can be detected.

Several methods exist which reduce the chances of contracting, or spreading, Campylobacteriosis. These include:
Proper hand washing, especially:
Washing raw fruits and vegetables thoroughly before consumption
Hygienically preparing food, and cooking it to an internal temperature of 165°F (74°C).
Only consuming boiled or pasteurized milk and milk products.
Boiling or disinfecting water with a chemical disinfectant before drinking.
Isolated infecting individuals and not allowing them to prepare foods or treat other patients.

Campylobacteriosis is a self-limiting disease. Affected individuals usually recover without receiving any specific treatment. However, electrolyte replacement and rehydration must be continued throughout the disease, until the diarrhea subsides.
Antimicrobial drugs are prescribed only when bacteria invades the intestinal mucosa cells and damage the tissues or to eradicate the carrier state of the disease.
Patients who suffer from bloody diarrhea, immunocompromised individuals (patients with the blood disorders thalassemia and hypogammaglobulinemia), AIDS, patients receiving chemotherapy or young children, who have a prolonged infection, are treated with macrolide or quinolone antibiotics. Patients with severe dysentery and with poor recovery may even require hospitalization.
The use of antibiotics always carries the risk of the disease-causing agent becoming resistant. Campylobacter can develop antibiotic resistance by spontaneous mutations and horizontal gene transfer. Some studies have suggested that the use of some phenolic compounds, such as dietary supplements, may reduce the chance of resistance developing.
Reviewed by Kate Anderton, BSc