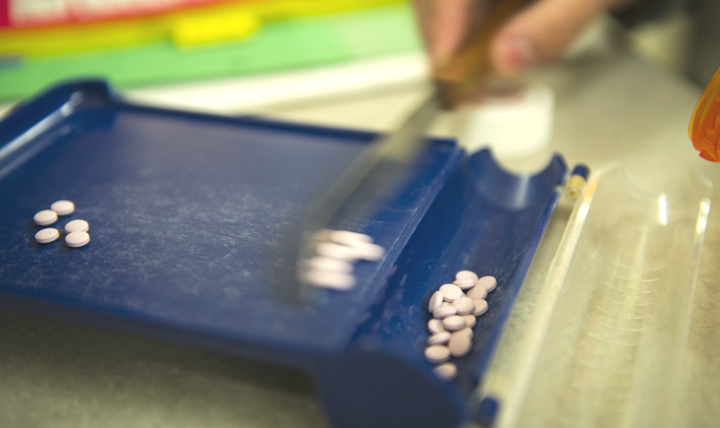 
FALLS CHURCH, VA — A new reporting tool developed by the Defense Health Agency’s Pharmacy Operations Division is helping ensure Military Health System providers follow best practices in prescribing medications for patients diagnosed with post-traumatic stress disorder.
The PTS Provider Prescribing Profile lists all providers at military treatment facilities who are treating patients with PTSD or acute stress disorder, said Sushma Roberts, Ph.D., a clinical psychologist and senior program manager for DoD/VA Integrated Behavioral Health, Clinical Communities Support Section, Clinical Support Division. The tool also documents the medications providers are prescribing.
According to the Psychological Health Center of Excellence, PTSD is a medically diagnosed mental health condition that may develop after experiencing, witnessing, or learning the details of a traumatic event such as combat, a natural disaster, sexual assault, or a terrorist attack.
From February 2000 to February 2018, about 223,000 active-duty service members were diagnosed with PTSD, Roberts said, adding that 75 percent were diagnosed following a deployment of 30 days or longer.
Currently, the focus is on benzodiazepines, or benzos. The clinical practice guideline released in 2017 recommended against prescribing benzos for PTSD patients, she noted.
Benzos, also known as tranquilizers, act on the brain and central nervous system to produce a calming effect. People can easily develop a tolerance to benzos, health care experts say, needing higher doses and increased frequency to achieve the same effects. People also may suffer withdrawal symptoms, including insomnia, irritability, anxiety, panic attacks, and seizures.
It’s dangerous to combine benzos with alcohol or other medications such as opioids. In 2015, 23 percent of people who died of an opioid overdose also tested positive for benzo use, according to the Centers for Disease Control and Prevention.
“Benzos aren’t necessarily bad,” said Army Lt. Col. Dennis Sarmiento, a psychiatrist and chair of the DHA’s Behavioral Health Clinical Community. “There are indications for their use. Short-term, they can help with anxiety, panic, and sleep. Treating such symptoms can help providers engage patients in care and better establish or reinforce rapport.”
Studies have shown a large percentage of service members and veterans who may benefit from treatment for PTSD may not seek care or complete treatment, Sarmiento said.
But medications other than benzos are recommended for treating PTSD because they’re more effective. For example, antidepressants such as Zoloft, Paxil, Prozac, and Effexor raise the brain’s level of serotonin, a chemical that reduces symptoms of depression and anxiety.
“In contrast to benzodiazepines, these medications [antidepressants] can be used with trauma-focused psychotherapy,” Sarmiento said. Those therapies include talking or writing about traumatic events, or learning and practicing meditation or deep-breathing exercises to manage anxiety.
“Treatment should be tailored to the individual patient,” Sarmiento said.
Sarmiento notes that throughout the MHS, benzo prescriptions have been on a downward trend since peaking in 2012. “And from available pharmacy data, we know that the medications recommended for PTSD are appropriately trending upward,” he said.
Roberts said a prototype of the reviewing and monitoring tool was developed in February 2017. It was updated in September to reflect the revised VA/DoD clinical practice guideline for the management of PTSD and acute stress disorder. The tool generates quarterly reports that the DHA Pharmacy Operations Division sends to the three service surgeon general staffs to distribute to military treatment facility leaders.
“MTF commanders have the information to know what the prescribing practices are for PTSD patients at their particular facility,” Roberts said.
According to the tool, the number of benzos prescriptions for MHS beneficiaries diagnosed with PTSD dropped from 1,922 in the first quarter of fiscal year 2017 to 1,749 in the fourth quarter, a decline of about 9 percent. Data for the first quarter of FY 2018 was released this month. It shows the number dropped again — to 1,651.
“In June, we’ll assess trends based on second-quarter data,” Sarmiento said. “If the prescribing rate doesn’t continue declining, we’ll implement one-on-one education between clinical leadership and their high-prescribing providers.”
Meanwhile, Sarmiento encourages patients who’ve been diagnosed with PTSD to talk with their providers. “We want them to feel empowered to ask questions and understand their individual treatment plan,” he said.

Health care of the future: Virtual doctor-patient visits a reality at NCR

Robotic surgery is becoming the standard of care for many specialties and procedures
Recommended Content:
Technology | Innovation | Military Hospitals and Clinics

Your military family: The key to beating holiday blues

2017 Year in Review: A look at inspiring individuals who help shape the MHS

Regardless of procedure or patient, every incision is an exercise in mission readiness
Recommended Content:
Military Hospitals and Clinics | Health Readiness

The pain medication is managed with the placement of an intrathecal catheter and infusion of preservative-free morphine
Recommended Content:
Military Hospitals and Clinics