By Sally Robertson, BSc
Cells use the polymerization of actin alone to create some types of movement, but many other forms of movement require interplay between actin and an enzyme called myosin. 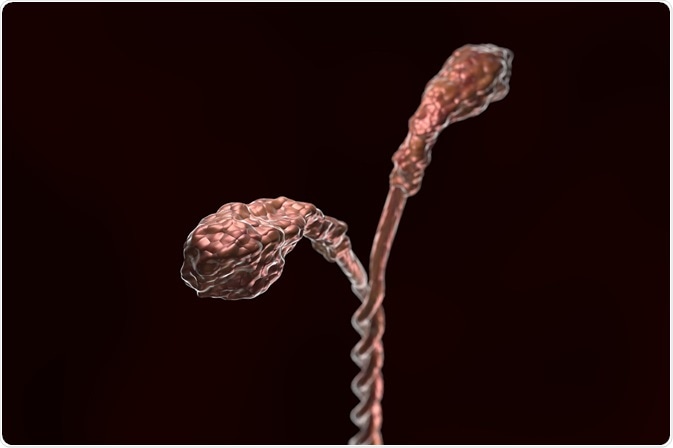 Credit: extender_01/Shutterstock.com
Actin proteins are assembled into a network of filaments referred to as the actin cytoskeleton, which provides a platform of tracks along which myosin can crawl. Some myosins bind to other proteins and carry them within cells or between cells using the actin filaments.
Myosin is an actin motor protein, where myosin serves as the engine, the actin filaments provide the tracks that myosin can move along and the energy source that fuels the movement is adenosine triphosphate (ATP).

Members of the myosin families have a distinct, conserved sequence of amino acids that serves as the ATP-binding “motor domain” of the molecule that produces force and imparts a specific function to the various motor proteins. The different families of myosin are made up of different members that carry out different cellular functions.
Certain myosins are required for muscle contraction. As myosin moves along the actin filaments, it converts chemical energy (through the hydrolysis of ATP) into mechanical force. This drives the shortening of structures within the muscle fiber called sarcomeres, the basic functional units of muscle contraction, so that movement is achieved.

Over recent years, genomic analyses have identified many members of the large myosin gene family. The most abundant myosin proteins are myosin I and myosin II, which are present in almost all eukaryotic cells. Myosin II is responsible for generating contractile force in skeletal muscle contraction and is perhaps the most studied of the proteins. Myosin I and the less common myosin V play a role in interactions that occur between the cell membrane and cytoskeleton, such as membrane vesicle transport.
All myosins are usually made of one or two heavy chains and a at least four light chains. The heavy chains are arranged into three different domains with distinct structures and function. A globular “head” domain has sites that bind actin and ATP for the production of mechanical force. An α-helical “neck” region lies adjacent to the head domain and is associated with the light chains, which modulate the head domain’s activity. The myosin proteins also have a tail domain where binding sites that dictate the myosin’s specific activity are located.

Diseases caused by mutations in myosin