Coccidioidomycosis causes substantial illness and death in the United States each year. Although most cases are sporadic, outbreaks provide insight into the clinical and environmental features of coccidioidomycosis, high-risk activities, and the geographic range of Coccidioides fungi. We identified reports published in English of 47 coccidioidomycosis outbreaks worldwide that resulted in 1,464 cases during 1940–2015. Most (85%) outbreaks were associated with environmental exposures; the 2 largest outbreaks resulted from an earthquake and a large dust storm. More than one third of outbreaks occurred in areas where the fungus was not previously known to be endemic, and more than half of outbreaks involved occupational exposures. Coccidioidomycosis outbreaks can be difficult to detect and challenging to prevent given the unknown effectiveness of environmental control methods and personal protective equipment; therefore, increased awareness of coccidioidomycosis outbreaks is needed among public health professionals, healthcare providers, and the public.
Coccidioidomycosis, also known as Valley fever, is a disease caused by dimorphic fungi of the genus Coccidioides (1). The arthroconidia persist in soil, and environmental factors, including season, temperature, precipitation, and soil salinity, influence the organism’s life cycle (2–4). Coccidioidomycosis is known to be endemic to the southwestern United States, south-central Washington, northern Mexico, and parts of Central and South America (1). Infection occurs primarily by inhalation of environmental arthroconidia, and symptoms develop in ≈40% of infected persons typically within 1–3 weeks after exposure (5). However, determining the time and place of exposure is often difficult unless a notable exposure occurred or the illness is part of an outbreak. Symptomatic patients frequently have an influenza-like syndrome characterized by cough, shortness of breath, fever, and fatigue that is commonly diagnosed as community-acquired pneumonia. In ≈1% of infections, disseminated extrapulmonary disease (e.g., meningitis, osteomyelitis, or soft tissue and subcutaneous infections) develops (1,6,7). Risk factors for disseminated infection include immunocompromised status and African and Filipino ancestry (1). Serologic methods are the mainstay of diagnosis in coccidioidomycosis-endemic areas; diagnostic confirmation with identification of Coccidioides by culture or histopathology is less common (8). Treatment for mild coccidioidomycosis is often supportive; however, severe infections require treatment with antifungal agents (1).
Approximately 10,000 coccidioidomycosis cases are reported in the United States annually through reportable disease surveillance, and the substantial year-to-year variation that occurs reflects changing environmental conditions and testing practices (9). The disease is widely underdiagnosed, however, and these cases most likely represent a small fraction of the true number (10). Much remains unknown about its epidemiology. Although most reported cases represent sporadic infections (i.e., non–outbreak-associated), outbreak investigations can provide insight into coccidioidomycosis epidemiology because the exposure sites and circumstances are known, along with dates of exposure and illness. Data from outbreaks have informed much of the knowledge about the disease’s incubation period, environmental sources, geographic range, and high-risk activities, but coccidioidomycosis outbreaks have not been systematically studied. In 2016, we reviewed documented coccidioidomycosis outbreaks to identify common features and prevention opportunities.

We searched PubMed, Medline, Embase, Global Health, and Scopus without date or language restrictions for articles using combinations of the terms “coccidioides” or “coccidioidomycosis” and “epidemic,” “outbreak,” or “cluster.” We also searched the digital archive of scientific literature produced by the Centers for Disease Control and Prevention (Atlanta, Georgia, USA) Stacks database (http://stacks.cdc.gov) for any reports with the words “coccidioidomycosis” or “coccidioides” published in Morbidity and Mortality Weekly Report before 1981. We reviewed proceedings from annual Coccidioidomycosis Study Group meetings held during 1980–2015 for abstracts describing possible outbreaks (11) and searched National Institute for Occupational Safety and Health Hazard Evaluation reports using the terms “coccidioidomycosis” or “coccidioides” (12). We reviewed all references pertaining to outbreaks in all relevant articles and reviewed any references cited within the initial article if they alluded to additional outbreaks or additional information for a known outbreak. We included in the analysis English-language articles published during January 1940–August 2016. We abstracted clinical and epidemiologic data of interest from reports of outbreaks that met these inclusion criteria.

We defined an outbreak as >2 human coccidioidomycosis cases linked to a common source, event, or activity in space and time. For an outbreak to be included, laboratory evidence of coccidioidomycosis was required for >1 case. However, to capture older literature describing outbreaks most likely attributable to coccidioidomycosis, we also included outbreaks if cases had a compatible clinical syndrome and unambiguous diagnostic terms, such as “coccidioidomycosis” or “primary pulmonary coccidioidomycosis,” and were described in a report that also mentioned >1 patient with 1) laboratory evidence of coccidioidomycosis, 2) hospitalization, or 3) identification of Coccidioides from the environmental source.
We reviewed laboratory and radiologic evidence of infection. Specific laboratory tests documented as positive were serology (including immunodiffusion, precipitins, complement fixation positive in any titer, and enzyme immunoassay); culture or direct visualization (i.e., smear or microscopy) of Coccidioides in any body fluid; PCR; and coccidioidin skin test (any reaction at any dilution). We considered infiltrates or abnormalities on chest radiography radiographic evidence of infection, whereas we defined radiograph findings reported as equivocal or nonspecific as equivocal. Symptomatic patients were those with clinical symptoms consistent with coccidioidomycosis, regardless of diagnostic studies.
We classified outbreaks as environmental or nonenvironmental (i.e., resulting from healthcare or laboratory exposure) in origin. We further subclassified environmental outbreaks by whether a probable exposure source (e.g., soil disruption, dust storm) was identified. Environmental outbreaks without a probable exposure source were limited to those clearly bound by beginning and end time points; we excluded generalized increases in incidence among specific populations. We further characterized outbreaks by their association with military activity, incarceration, residential areas, laboratory activities, archaeology and field studies, or travel. Incarceration included military and civilian incarceration, as well as any group of persons detained against their will (e.g., in Japanese internment camps). Outbreaks were classified as residential if the report described the outbreak at or near a residential area, including the residences of the persons exposed. Outbreaks were determined to be travel-associated if travel was explicitly mentioned, and all military outbreaks were also considered to be travel-associated.
Outbreak location was defined as the geographic location of the probable exposure source or the patients’ location when no source was identifiable. Occupational exposures were those clearly related to employment, as well as activities associated with archaeology, field studies, and military imprisonment. We also assessed reports for statements about whether outbreaks occurred in areas where, according to the original authors, coccidioidomycosis was not previously known to be endemic.
We determined epidemiologic metrics on the basis of the original authors’ definitions and defined the number of persons possibly exposed as those exposed to the probable source, if present. We also recorded the number of cases resulting in hospitalization, dissemination, meningitis, or death in outbreak reports that described any of these clinical outcomes. We considered patients with meningitis or sepsis to have disseminated disease. We documented use of antifungal drugs when available and recorded or estimated minimum, maximum, median, and mean symptom durations from figures and individual case reports when available. We further documented data pertaining to incubation periods for outbreaks that had total exposure periods (i.e., date of last exposure minus date of first exposure) lasting <2 weeks.
We directly documented all data in our analysis from the literature or estimated data using conservative assumptions (e.g., majority of cases was defined as 50% + 1). In the absence of explicit data or the above conservative estimates, we noted information as unknown and omitted it from our analysis.
Top 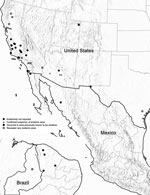 Figure 2. Locations of environment-associated coccidioidomycosis outbreaks, by state or territory and whether the outbreak revealed new or confirmed suspected endemicity (n = 40), United States, Mexico, and Brazil, 1940–2015.
Forty (85%) outbreaks were associated with environmental exposure, 33 (83%) of which occurred in the United States. Among the US environment-associated outbreaks, 25 (76%) occurred in California, 4 (12%) in Arizona, and 2 (6%) each in Utah and Texas (Figure 1, panel B). Of the remaining 7 (18%) environment-associated outbreaks, 5 (71%) occurred in Brazil and 2 (29%) in Mexico (Figure 2). Thirty-five (88%) environment-associated outbreaks involved a documented probable exposure source.
We found 7 (15%) nonenvironmental outbreaks. Four of these were related to laboratory exposures, 2 involved transmission through organ transplantation, and 1 was a nosocomial outbreak.
Two (4%) outbreaks comprising 582 (40%) cases resulted from separate natural phenomena in California: the Northridge earthquake in 1994 in Ventura County and the “Tempest from Tehachapi” dust storm in 1977. Twenty-one (45%) outbreaks comprising 566 (39%) cases were travel-associated. There were 316 (22%) cases in the 5 (11%) outbreaks among incarcerated populations, including 160 cases from 2 outbreaks in prisoner-of-war camps, 30 cases from an outbreak in a Japanese internment camp, 119 cases from an outbreak in a civilian prison, and 7 cases from an outbreak in a juvenile work camp.
Thirty-seven (79%) outbreaks reported whether the given outbreak revealed previously unknown information about endemicity. Of these, 12 (32%) revealed a new area (in Arizona, California, Texas, Utah, and Brazil) to which coccidioidomycosis was endemic, and 4 (11%) confirmed the endemicity of a suspected endemic area (in Arizona and California).

Health outcome data were available for 35 (74%) outbreaks in which 544 (43%) patients were hospitalized (Table 2). Thirty-two (3%) patients had disseminated coccidioidomycosis and 20 (2%) had meningitis; 18 (1%) died. Of the 20 (43%) outbreaks that described antifungal treatment, 128 (18%) patients in 13 outbreaks were treated with antifungal drugs, including amphotericin B, fluconazole, and other azole antifungals.
Top

We acknowledge the many outbreak investigators who made this work possible, Julia Bryant for her support with mapping the outbreaks, and Marie A. de Perio for manuscript review.
Top