The sobering reality of one drink too many | Health.mil

The sobering reality of one drink too many | Health.mil

The sobering reality of one drink too many 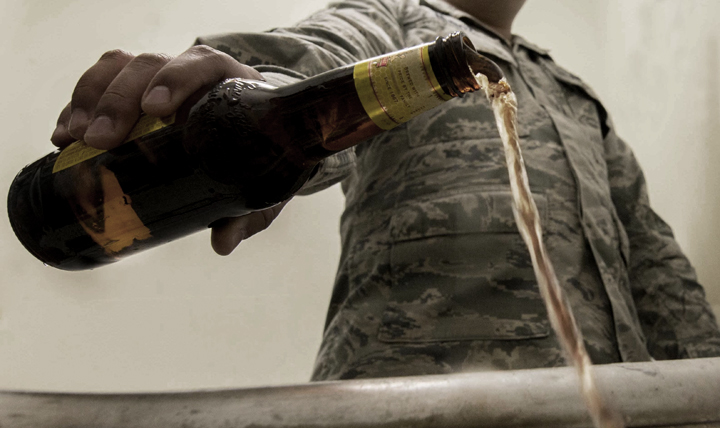 Some people follow the boozy holiday season with Dry January, an unofficial movement to abstain from alcohol for 31 days. But alcohol consumption is a year-round activity, and for some, a year-round problem that requires professional help. (U.S. Air Force photo illustration by Airman 1st Class Sahara. L. Fales)


A long with brightly wrapped gifts, festive gatherings, and hearty meals, alcohol has become a standard feature of the holidays. The “drinking season” starts Thanksgiving Eve – the deadliest night for alcohol-related auto accidents, according to the National Highway Traffic Safety Administration – and continues practically nonstop to the champagne toasts ringing in the New Year.
Some people follow these booze-filled weeks with Dry January, an unofficial movement to abstain from consuming alcohol for 31 days. While there’s not consensus on whether no alcohol is generally better for people than some alcohol, health care experts agree there are many reasons to limit alcohol consumption year-round.
“The negative short- and long-term consequences of alcohol misuse far outweigh any small health benefits of modest consumption,” said Army Maj. Kathryn Berryman, referencing a study that found antioxidants in red wine may prevent coronary artery disease.
According to the National Institute on Alcohol Abuse and Alcoholism, or NIAAA, about 16 million Americans have alcohol use disorder, or a drinking habit that threatens health, safety, and general well-being.
Short-term risks of overindulging include injuries and accidents, and problems with loved ones and work colleagues, said Berryman, an obstetrician-gynecologist and attending physician at Brooke Army Medical Center, Fort Sam Houston, Texas.
Long-term health risks include liver and heart disease and cancers of the mouth, throat, and esophagus, according to the Centers for Disease Control and Prevention. “And actually, there’s good evidence of an increased risk of dementia and early-onset dementia,” Berryman said.
The NIAAA defines one drink as 12 ounces of beer with 5 percent alcohol content, 5 ounces of wine with 12 percent alcohol content, or 1.5 ounces of distilled spirits with 40 percent alcohol content. The organization defines low-risk drinking for women as no more than three drinks on a single day, and no more than seven drinks per week. For men, it’s no more than four drinks on a single day, and no more than 14 drinks per week.
The numbers for women are lower because body composition and other factors typically cause women to feel the effects of alcohol more quickly than men do. Also, alcohol’s effects in women last longer. A 2013 study of Military Health System data by University of South Carolina researchers found that while women in uniform consumed less alcohol than their male counterparts, women’s alcohol dependency rates were equal or higher.
“The more you drink, the more quickly you become physically dependent and also build a tolerance,” Berryman said. “So you could have someone who has one drink daily and over time becomes dependent. Or someone could have a lot more than one drink a day, and then become dependent in a matter of weeks or months.”
Low-risk drinking doesn’t mean no risk, according to the NIAAA. People who stick to the guidelines still may have problems if they drink too quickly, have other health concerns, or are older than 60. Also, mixing alcohol with prescription and over-the-counter medicationscan be deadly.
Pregnant women should never drink alcohol, Berryman said. Babies exposed to alcohol in the womb may face a lifetime of mental, behavioral, and developmental problems as well as physical birth defects. Excessive drinking also increases the risk of miscarriage, stillbirth, and premature delivery, according to the CDC.
The MHS and veteran health communities use the AUDIT-C (Alcohol Use Disorders Identification Test) as a screening tool to identify alcohol use disorders. But Berryman said it’s often as simple as this: “If you need a drink to be comfortable in a social situation or to get though a challenging day or to be able to sleep at night; if there’s that feeling of, ‘I really need a drink’ to be able to accomplish whatever task, that’s a pretty good indicator that alcohol has become a problem.”
Treatment and support are available for those in the military community who need help overcoming an alcohol dependency.
“Alcohol affects brain chemistry so sometimes, quitting isn’t simply a matter of willpower,” Berryman said. “Alcoholism is a disease just like any other disease. And it requires medical attention from trained experts.”

Many of our medicine cabinets have bottles of prescribed and over-the-counter medications that are expired or that we no longer use
Recommended Content:
Drug Take Back Program | Substance Abuse

To drink or not to drink: Have a plan

The Military Health System is helping the military community fight back against the dangers of unneeded, unused and expired drugs
Recommended Content:
Drug Take Back Program | Substance Abuse

The app is intended to support patients where they do not have immediate access to their health care providers but have questions about appropriate use of their prescription medication
Recommended Content:
Technology | Substance Abuse

Stimulants – Give your heart a break