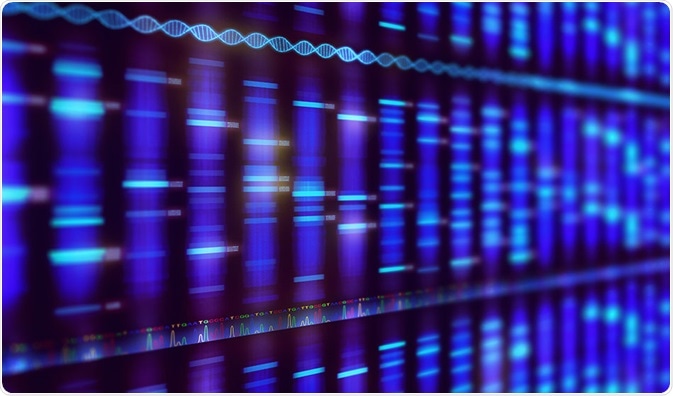 Credit: ktsdesign/Shutterstock
Sanger sequencing was developed in the 1970s by Frederick Sanger and was the original DNA sequencing method.
In Sanger sequencing, chain-terminating  nucleoside bases are incorporated into the DNA replication reaction. This results in a series of DNA chains truncated at each base pair in the sequence. The sequence is then read by separating these chains on a polyacrylamide gel.
Next generation is a newer method that can be used to sequence much larger pieces of DNA, or even whole genomes. It is based on sequencing during the DNA synthesis reaction. The reaction is carried out on a fixed surface. Each time a base is added, the new sequence information is read. Thousands of reactions can be sequenced simultaneously.

The dominant next-generation sequencing platform is Illumina. It was originally developed by David Klenerman at the University of Cambridge, and commercialized by Solexa in 1998. Illumina purchased Solexa in 2007, acquiring the technology.
Illumina’s method has a similar concept to Sanger sequencing. In Sanger sequencing, chain-terminating di-deoxynucleosidetriphosphates (ddNTPs) are incorporated into DNA chains during DNA replication using template DNA and a primer to begin the reaction.
In Illumina sequencing, reversible terminators are attached to regular deoxynucleosidetriphosphates (dNTPs). The terminator blocks extension of the DNA chain.
However, the terminators are reversible, so after readout, the terminator is removed and another base is added to the chain. The cycle is then repeated for the full read length of the fragment.

When to use Sanger sequencing

Next generation sequencing technology is now preferred for certain jobs. Those include:
Sanger sequencing is still a good choice when:
Reviewed by Afsaneh Khetrapal Bsc (Hons)