Keio University Global Research Institute, Tokyo publishes the January 2018 issue of KGRI Research Frontiers that includes researcher video profiles of Keio University researchers and research highlights from high impact publications including 'Regenerative medicine needs collaboration in and out of science in order to face current and future challenges; ‘Does eating fish protect you from depression?’; ‘Insights into the molecular mechanisms leading to kidney dysfunction in diabetic patients’; and ‘Ageing to 100 and beyond: Insights from demographic, phenotypic and genetic studies.
January 2018 issue of KGRI Research Frontiers http://www.kgri.keio.ac.jp/en/research-frontiers/index.html 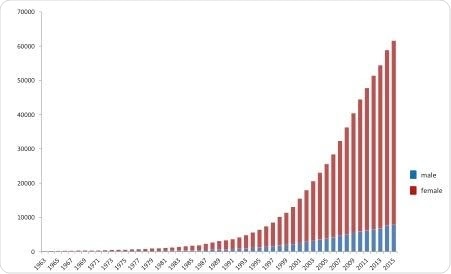 Centenarians in Japan between 1963 and 2015.
Research Highlights
Regenerative medicine needs collaboration in and out of science in order to face current and future challenges
http://www.kgri.keio.ac.jp/en/research-frontiers/2017med.hideyuki.okano.html
Regenerative medicine is a broad term used to describe approaches to repair or replace damaged or diseased human cells or tissues. This can be achieved through a variety of approaches, including the use of stem cells and stimulating the body's own repair mechanisms. Due to its wide implications in science, technology and ethics, regenerative medicine has attracted the attention of a multitude of 'stakeholders' from scientists and physicians to those involved in ethical, legal and social implications (ELSI).
In a recent review, Douglas Sipp from the Keio University School of Medicine in Tokyo, Japan, and his colleagues from the University of British Columbia, McGill University, the University of Miami, the California Institute of Regenerative Medicine, the University of Alberta, the University of Montreal, the University of Ottawa and the University of Regina, give an overview of past initiatives relating to social, ethical and legal aspects of regenerative medicine and offer their view on future priorities.
Even countries that have shown leadership and have established policies, such as Canada, are now facing a shift in the landscape of regenerative medicine due to fast scientific advances such as those relating to induced pluripotent stem cells (iPSCs) and targeted genome editing using novel techniques such as CRISPR/Cas9.
A key aspect for the advancement of the field is collaboration between scientists and and those within the ELSI community. Training of both sides to collaborate is being explored in Canada, which is looking to launch a training series to familiarise social scientists with the laboratory workflow and laboratory-based scientist with the problems facing those who deal with ethical and social aspects of the field. The authors also suggest adding experts from these different disciplines to grant applications.
Fast scientific advancements in the field have left many laws and policies as being outdated. Hence, the authors call for leaders in the international regenerative medicine community, such as the International Society for Stem Cell Research, to look at existing policies and consider reforming them to keep-up with the rapid technological advances that are taking place.
In the age of social media, the perception of regenerative medicine and the questions it raises are easily communicated to the public, but in some cases, can also be distorted. Therefore, the authors suggest "the ELSI community can and should play a role both by studying the impact of these new modes of popular media and engaging directly with the broader public and patient communities through participation in virtual communities and networks."
Judy Illes etal, A blueprint for the next generation of ELSI research, training, and outreach in regenerative medicine, npj Regenerative Medicine 21 (2017).
Does eating more fish protect you from depression?
http://www.kgri.keio.ac.jp/en/research-frontiers/2017med.masaru.mimura.html
According to the world health organization (WHO), depression is the greatest single cause of disability worldwide. Therefore, understanding mechanisms leading to depression and how to minimize its risks is very important.
Several studies have reported that fish consumption is associated with a reduced risk of depression. However, these studies remain to be controversial due to inconsistencies between some of them, the method that they used to assess depression and because none have established a clear dose that is required for the observed effects on depression.
A group of Japanese researchers has recently demonstrated that moderate fish intake is recommended for preventing depression in aged Japanese individuals.
Yutaka Matsuoka and colleagues from the National Cancer Centre Japan, the University and Toyama and Keio University School of Medicine, investigated the association between fish consumption and the risk of psychiatrist-diagnosed major depressive disorder (MDD) in Japan. The study involved 1181 individuals (aged 63-82) for whom dietary information had been available over the course of up to 25 years, because they had taken part in the Japan Public Health Centre-based (JPHC) Prospective Study. Psychiatric assessment was conducted for each of these individuals using both standard questionnaires and assessment by trained psychiatrists.
The authors assessed the active ingredients in fish that are thought to mediate the anti-depression effect which are n-3 polyunsaturated fatty acids (PUFAs) such as eicosapentaenoic acid (EPA) and docosapentaenoic acid (DPA). The study found that the relationship between fish intake and MDD does not follow a simple linear profile, but rather a so-called reverse J-shaped association is observed. A decreased risk of MDD was observed in individuals with a median intake of 111 g/day of fish, 307 mg/day of EPA or 123 mg/day of DPA.
The authors conclude that "emerging and compelling evidence suggests that diet and nutrition are extremely important factors in the high prevalence of depressive disorders, and our findings provide a basis to further examine the effectiveness of fish and n-3 PUFA intake for the prevention of MDD in both aged individuals and those with a history of major physical illness."
Yutaka Matsuoka etal, Dietary fish, n-3 polyunsaturated fatty acid consumption, and depression risk in Japan: a population-based prospective cohort study, Transl Psychiatry, 26 September 2017 .
Insights into the molecular mechanisms leading to kidney dysfunction in diabetic patients
http://www.kgri.keio.ac.jp/en/research-frontiers/2017med.hiroshi.itoh.html
About one-third of diabetes patients suffer from renal failure. Therefore, understanding the mechanisms linking diabetes to renal damage (diabetic nephropathy) would benefit patients as it would help in developing new therapeutic targets and strategies. Sirtuin 1 (Sirt1) is a protein that is involved in cellular stress responses and has been implicated in diabetic nephropathy. However, the exact role of renal Sirt1 on the pathogenesis of renal damage in diabetes has not been fully elucidated.