By Liji Thomas, MD
Recurrent miscarriage is also known as fetal wastage syndrome or recurrent pregnancy loss (RPL). It is a condition in which a woman loses several early pregnancies. It is important to identify the cause of miscarriage as in some cases it can be treated. 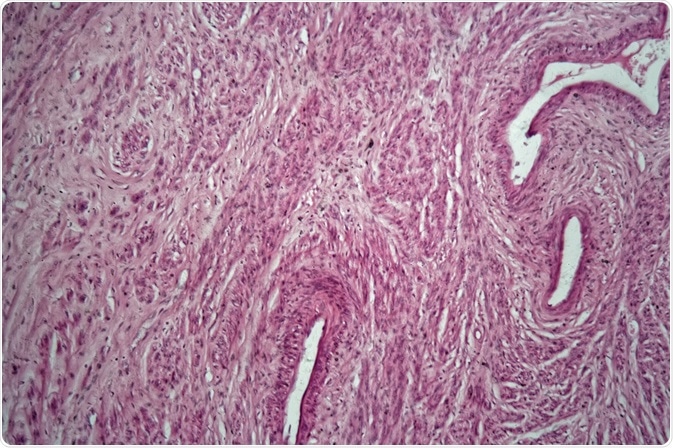 Cells of a human uterus with uterine fibroids. Credit: ChWeiss/ Shutterstock.com
The causes of recurrent miscarriage are diverse, but may be classified as:

Abnormalities of the uterus or the fallopian tubes

In 10-15% of RPL, the blood supply to the uterus is deficient and this causes the placenta to be too small to support the healthy growth of the fetus. This can be due to congenital anomalies of the uterus, the formation of intrauterine adhesions, or uterine fibroids or polyps. These are more likely to result in late pregnancy losses rather than early abortions, however.
The presence of a septum dividing the uterine cavity is the factor most commonly associated with miscarriage, which occurs in over three-fourths of affected women. Other anomalies of the uterus include unicornuate or bicornuate uteri, and uterus didelphys.
Intrauterine adhesions, or synechiae, also called Asherman’s syndrome, which often form following curettage of the uterine endometrium, or sometimes uterine surgery or endometritis, cause the uterine cavity to be pocketed into smaller spaces, and prevents the placenta from forming properly.
The presence of fibroids, especially intramural (inside the uterine wall) or submucous (under the endometrial surface), is also a contributor to RPL.

In about 17-20% of cases of RPL, there are various endocrine abnormalities. The hormones affected include progesterone, insulin, thyroxine, estradiol, FSH or LH, androgens, and prolactin. Progesterone and related hormones such as LH or androgens are suggested to be responsible for an unripe endometrium which is not favorable for the early growth of the pregnancy, but this theory is not universally accepted as valid.
Again, 40% of women with RPL have polycystic ovarian disease, characterized by insulin resistance, higher androgen levels than normal, and hyperglycemic tendencies. This, as well as poorly controlled diabetes mellitus type II, leads to hyperinsulinemia which is a factor causing RPL.
Hypothyroidism is another factor important in the etiology of RPL, especially when associated with anti-thyroid antibodies, as is hyperprolactinemia.

Abnormalities of the chromosomes

In 2-4% of RPL, there is a parental chromosomal anomaly, the most common being caused by Robertsonian translocations of chromosomes that result in an excessive or less-than-normal number of chromosomes in a single homologous chromosomal pair. These usually result in severely defective embryos. In fact, 90% of chromosomally abnormal embryos are found to be miscarried.

Immunologic differences between a fetus and the mother may sometimes precipitate rejection features which lead to miscarriage, both sporadic losses and RPL. Among these is the antiphospholipid antibody syndromes (APS) which occurs in about 5-30% of women with RPL.
It is characterized by criteria such as vascular thrombosis, 3 or more early pregnancy losses, 1 or more midtrimester loss, or 1 preterm birth resulting from severe pregnancy-induced hypertension or inadequate placental support, in combination with detectable anticardiolipin antibodies or lupus anticoagulant on at least 2 separate tests, 12 or more weeks apart.
The way in which this occurs is thought to be by poor placental development, death of placental cells, and placental inflammation, as well as reduced vascular growth at the placental site. Thus APS
APS is also associated with certain abnormalities of blood clotting, called thrombophilias, which also cause RPL. These are abnormalities in the coagulation pathway due to alteration of one or more functional proteins involved in it.
This causes venous thromboembolism. However, both acquired and congenital thrombophilias are relatively common, including heritable Factor V Leiden mutation, methylene tetrahydrofolate reductase (MTHFR) gene mutations, antithrombin III and protein S deficiency, and acquired hyperhomocysteinemia, and activated protein C resistance.
Both these groups of disorders are thought to be associated with poor placental development and function as a result of clotting within the placental arteries or veins.

The role of infectious agents, including Listeria, Toxoplasma, rubella (German measles), herpes simplex, and cytomegalovirus (CMV) is not yet clearly established, but it is thought that about 5% (probably less) of RPL is due to infection, chiefly with Listeria, chlamydia, mycoplasma, ureaplasma, and herpes viruses.
These may lead to infection of fetal tissues, placental tissue or the uterus, or they may lead to poor placental function, produce chronic inflammation of the uterine lining or of the cervix leading to miscarriage, or could in some cases be associated with infection of a contraceptive intrauterine device. However, this is not recognized as a valid factor in RPL by many experts in this field.
Again, exposure to organic solvents or ionizing radiation, environmental toxins and certain medications, as well as maternal exposure to alcohol, caffeine and tobacco smoke, especially at high levels, is thought to be a factor leading to pregnancy losses, but studies on this have found it difficult to establish any firm conclusions.
More than 3 drinks a week in the first trimester, or more than 5 drinks a week throughout pregnancy, increases the risk of miscarriage. Smoking is well known to reduce the risk of miscarriage because of the vasoconstrictor effect of nicotine on the uterine blood flow. 3-5 cups of coffee can also increase the risk of pregnancy loss which increases as caffeine consumption goes up. However, the linkage between these and RPL is weak.

Even after all known and potential causes of RPL are explored, about 50% of cases remain unaccounted for by any of these mechanisms.
Reviewed by Afsaneh Khetrapal Bsc (Hons)