By Jeyashree Sundaram, MBA
Generalized anxiety disorder (GAD) is a psychological disorder that is described by extreme anxiety in response to normal challenges, a response that has been characterized as a result of functional deterioration in the limbic system of the brain. 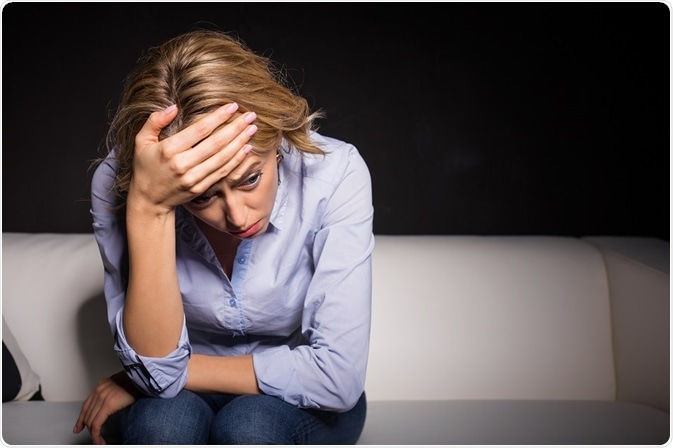 Credit: Kaspars Grinvalds/ Shutterstock.com
The limbic system controls and drives the basic emotions of an individual through neural networks among the amygdala, ventromedial anterior cortex, dorsolateral prefrontal cingulate cortex (DLPFC), and the hippocampus regions of the brain. These regions are associated with anxiety acquisition, expression, and its consecutive inactivity.

Neuroanatomical imaging technique or brain imaging is a new field of psychology, which employs various techniques in which direct or indirect images of the structure and physiology of the nervous system is acquired. When this imaging was used with GAD patients, the following results were obtained.
All these aspects correspond positively with the severity of the symptoms of GAD.

I.     Neural mechanisms behind symptoms of GAD

Neurotransmitters in the brain and other hormones modulate the neural circuitry involved in anxiety. Elevation of amygdala activity, or limbic hyperactivity, results from neurotransmission dysregulation caused either by
In several studies, the dysregulation of GABA (gamma amino butyric acid), a inhibitory neurotransmitter, especially the GABAA variant,has long been found to elevate the amgydala activity in the brain, thereby causing GAD.

Apart from the aberrant functioning of the VLPFC, the relationship between the prefrontal region and the amygdale, when altered, also results in symptoms of GAD. The main activity of VLPFC is inhibition. When a patient is subjected to relentless cognition, VLPFC inhibition is decreased thereby modifying the effect of amgydala volume.
Studies have hypothesized that the nervous dysregulation affecting the synergy of the VLPFC-amygdala connections might cause anxiety. It is found that in GAD patients, there is a weaker pairing between the VLPFC and the amygdala. Sometimes, decreased or increased connection between other prefrontal cortexes with the amygdala also results in GAD.

Processing of long-term memory is a vital role of the hippocampus. An increased level of amygdala activation indirectly causes the secretion of stress hormones which directly interacts with the hippocampus. Researchers have discovered that continuous exposure of an individual to stress hormones adversely affects the development of nerve cells in the hippocampus region of the brain. This aspect may be responsible for the memory dysfunction in GAD patients.

The major autonomic dysfunction in GAD patients is the inability to alter the heart rate as a result of reduction in heart rate variance (HRV). The change in concentration of white matter present in the DLPFC region of brain (along with VLPFC) is responsible for HRV. The changes seen in HRV in both the regions may be due to extensive interaction with blood oxygenated level-dependent (BOLD) signal change during anxious condition.

A very few studies also depict that increased secretion of CRF or glucocorticoids results in GAD symptoms when they come in contact with the HPA axis. Unfortunately, there is paucity of evidence for the pathophysiological functions of CRF circuits in GAD.

Numerous studies have shown an improvement in GAD symptoms on a neuronal basis through effective treatment procedures.

Several functional magnetic resonance imaging (fMRI) studies have shown that mindfulness activity results in changes in the fronto-limbic regions of the brain, which is important in the management of emotions. The following changes agreed with recorded symptom betterment.

GAD symptoms were effectively improved by the following medications.

This therapy results in increased activation of VLPFC along with SSRI class of drugs. Also, DLPFC is activated, which is associated with executive cognitive control.
Reviewed by Liji Thomas, MD.