We describe the frequency, demographic and clinical features, and visual outcomes of ocular syphilis infections observed during 2012–2015 at a tertiary reference center in Paris, France. Twenty-one cases (29 eyes) were identified. The occurrence of ocular syphilis increased from 1 case in 2012 to 5 cases in 2013, 6 cases in 2014, and 9 cases in 2015 (2.22–25.21/1,000 individual patients/year for the period). Among case-patients, an annual 20%–33% were co-infected with HIV. Seventy-six percent of ocular syphilis infections occurred in men who have sex with men. Seventy-five percent of case-patients had a good final visual outcome (best-corrected visual acuity >0.3 logMAR score). Visual outcome was worse for HIV-positive patients than for HIV-negative patients (p = 0.0139). At follow-up, the best visual outcomes were observed in patients whose mean time from first ocular symptom to consultation was 15 days (SD +19 days).
Syphilis is a sexually transmitted disease caused by the bacterium Treponema pallidum, which can infect almost any part of the body (1). Depending on the stage of the disease, acquired syphilis is classified into early (primary, secondary, and early latent) syphilis and late (or tertiary) syphilis (2,3). Although most cases of ocular syphilis occur in the context of tertiary syphilis, approximately one third of reported cases occur in the context of primary and secondary syphilis (4,5). Uveitis is observed in 0.6%–2.0% of patients with syphilis in any stage and up to 9% in patients co-infected with syphilis and HIV (HIV) (6–10). Syphilitic uveitis is considered a great mimicker because it can manifest as anterior uveitis, posterior uveitis, or panuveitis (11–13). Failure to recognize the ocular manifestations of syphilis or delayed treatment can lead to irreversible visual loss (14,15).
Syphilis has recently reemerged in the Western world in the context of the HIV crisis and massive sexual behavior changes among men who have sex with men (MSM). In 2015, nearly two thirds (62%) of the syphilis cases with information on transmission category were reported in MSM (16).
In this context, we set up a retrospective study to review ocular syphilis cases observed during 2012–2015 in a tertiary reference center in Paris, France. Our objectives were to analyze trends in ocular syphilis frequency, demographic characteristics, clinical severity, and patient outcome.

We reviewed the medical records of patients examined at the uveitis clinic (Centre Hospitalier National d’Ophtalmologie des Quinze-Vingts, Paris, France) from January 2012 through December 2015. We retrospectively identified patients with a new diagnosis of ocular syphilis. During the study period, 1,493 new patients were examined for uveitis. Patients meeting all the following criteria were included: age >18 years, having intraocular inflammation specifically affecting the uvea, and having a syphilis infection confirmed by the Venereal Disease Research Laboratory (VDRL) test. We defined a positive serologic test result as a positive T. pallidum hemagglutination assay (TPHA) and a positive VDRL test result in accordance with the classification of syphilis (17,18). We used a standardized strategy to diagnose uveitis (19), including anti-Treponema antibody detection in all patients in whom uveitis was diagnosed, with additional tests guided by the clinical context and paraclinical findings.
We reviewed files to collect the following data: demographic information, including MSM status (in case of sexually transmitted disease, sexual orientation was recorded in the patient’s confidential file according to national ethics guidelines); duration of symptoms before diagnosis; and history of extraophthalmologic signs. Ophthalmologic examination included the measurement of the best-corrected visual acuity (BCVA) at initial presentation, at 15 days, and at the last follow-up. We converted BCVA to a visual acuity (VA) score on the basis of the logarithm of the minimum angle of resolution (logMAR).
We examined results from the slit lamp examination (in the anterior segment of the eye) and the fundus examination. We used the most informative imaging modality in patients with retinal inflammation, fundus fluorescein angiography, to report characteristic features of retinal vasculitis, optic nerve head inflammation, and macular edema. We used other fundus imaging studies such as indocyanine green angiography to assist in cases of choroidal inflammation, fundus autofluorescence imaging to assess retinal pigment epithelium integrity, and spectral-domain optical coherence tomography to evaluate retinal damage.
Applying the International Uveitis Study Group criteria, we classified uveitis into the following subtypes according to the site of inflammation: anterior uveitis, intermediate uveitis, posterior uveitis, or panuveitis (20,21). We considered placoid chorioretinitis to be the presence of >1 placoid, yellowish, outer retinal lesions. Fundus fluorescein angiography, indocyanine green angiography, and fundus autofluorescence indicate a typical fluorescent pattern in cases of placoid chorioretinitis (22,23).
Biological data included the results of treponemal and HIV serologic tests and the results of cerebrospinal fluid (CSF) analysis. The decision to perform lumbar puncture was left to the clinician’s discretion. We defined neurosyphilis as positive results in nontreponemal and treponemal serologic tests, combined with neurologic and CSF abnormalities, such as high leukocyte or protein concentrations (>0.5 g/L), and 1 CSF abnormality, such as positive VDRL or fluorescent treponemal antibody absorption test results (24–26) or a positive PCR test result for T. pallidum. Treatment and outcome data included the type, dose, duration, and route of antibiotic administration and corticosteroid treatment (local or systemic) as well as final VA.
We tested data variable distributions for normality and, when appropriate, we performed t-tests or equivalent nonparametric tests. We used 1-way analysis of variance when >3 groups were present and defined statistical significance as p<0.05. We analyzed the data by using R 3.2.2 software (https://cran.rproject.org/bin/windows/base/old/3.2.2).

Twenty-one patients were affected, all men. The median age at presentation was 49 years (range 22–72 years). No difference in the mean age of patients was observed at diagnosis of ocular syphilis in 2013, 2014, and 2015. Median follow-up was 2 months (range 1–22 months). 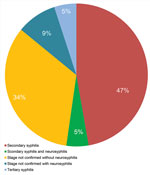 Figure 2. Presence of neurosyphilis and stages of syphilis in 21 patients with ocular syphilis seen at a uveitis clinic, Paris, France, 2012–2015. 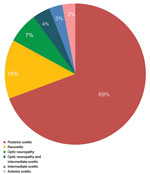 Figure 3. Anatomical sites of ocular inflammation in 21 patients with ocular syphilis seen at a uveitis clinic, Paris, France, 2012–2015.
At the time of uveitis diagnosis, 14 (67%) patients reported extraophthalmologic features, including rash, ulcer, mucocutaneous lesions, or neurologic signs. We noted the stages of syphilis and the presence of neurosyphilis in the 21 patients with ocular syphilis (Figure 2). Tertiary syphilis was diagnosed in only 1 (5%) patient, secondary syphilis in 11 (52%) patients, and an undetermined stage of syphilis in 9 (43%) patients. Of the 14 patients who had a lumbar puncture to assess CSF for evidence of neurosyphilis, 3 (21%) patients with ocular syphilis had neurosyphilis, and in 7 (50%) patients the CSF showed a lymphocytic reaction. We noted the frequency of different clinical presentations and anatomical types of ocular inflammation (Figure 3). The mean duration of ophthalmologic symptoms was 1 month before presentation at the uveitis clinic (range 1 day–4 months).
Isolated posterior uveitis was the most common type of uveitis observed within the cohort (69%), followed by panuveitis (14%). We summarized the frequency of clinical manifestations in patients with ocular syphilis (Table 1). Posterior placoid chorioretinitis was the most frequent finding in the posterior segment (58% of the total number of affected eyes); this condition accounted for 75% of cases of syphilis with eye involvement in 2013 and 81% in 2015.
Patients with bilateral impairment had a mean BCVA of 0.9 logMAR (range 0–2.30), whereas patients with unilateral disease had a mean BCVA of 1.02 logMAR (p = 0.54). Worse final VA outcomes (BCVA >0.30 logMAR) were found in patients who waited a mean 61 days (SD +53 days) before seeking medical care. Patients who had the best final VA outcome (BCVA <0.30 logMAR) had waited a mean 15 days (SD +19 days) before seeking medical care.

Most of the patients (17/21) were treated with daily intravenous penicillin, 3 patients received intravenous ceftriaxone, and 1 received oral doxycycline for 2 weeks followed by ceftriaxone for 2 weeks. The duration of treatment ranged from 2 to 3 weeks, although 2 patients received a total of 4 weeks of treatment (1 who was treated first with doxycycline and 1 who was diagnosed with tertiary syphilis). The penicillin dosage was 24 million IU/day for 13 patients, whereas 20 million IU/day was used in 4 patients (including 1 who was diagnosed with neurosyphilis). Five of the 7 patients with neurosyphilis were treated for 2 weeks.
In addition to receiving antibiotic therapy, 11 patients also received corticosteroid treatment orally (9 patients), periocular treatment (4 patients), or both (Technical Appendix Table 1). Corticosteroids were administered in 4 cases to treat an ocular Jarisch-Herxheimer reaction (JHR) (sudden onset of vitritis, papilledema, or both after initiation of systemic antibiotic therapy), and in the other 7 cases for persistence of ocular symptoms (papillitis, macular edema, or retinal vasculitis) despite appropriate antibiotic therapy. In 1 patient (patient 20), systemic corticosteroids were used to prevent systemic JHR (online Technical Appendix Table 2).

Figure 4. Visual acuity at initial examination versus final acuity (r = 0.5) in 21 patients with ocular syphilis seen at a uveitis clinic, Paris, France, 2012–2015.
Before antimicrobial drug therapy at initial presentation, 62% of patients had BCVA <0.3 logMAR (20/40 Snellen); after antimicrobial drug therapy at final follow-up, 75% had BCVA >0.3 logMAR (20/40 Snellen) (Figure 4). Of the 5 patients with a final BCVA >0.3 logMAR (20/40 Snellen), only 2 had a treatment delay (<12 weeks); therefore, we cannot correlate duration of treatment and visual prognosis because of the small number of patients with a poor outcome.
Most patients had better final VA than at presentation, with a mean initial BCVA of 0.9 logMAR (range 0–2.3) to a mean final BCVA of 0.2 logMAR (range –0.2 to 2.3). BCVA at presentation did not predict BCVA posttreatment (r = 0.5) (Figure 4). All patients had a good outcome in terms of quiescence of uveitis and final BCVA regardless of whether or not they had been treated with systemic or subconjunctival corticosteroids. No statistically significant difference in final BCVA after treatment was found between patients on the basis of whether or not they received systemic or subconjunctival corticosteroids: 0.40 logMAR (range 0–2.3) versus 0.15 logMAR (range –0.2 to 0.5), respectively (p = 0.208). Initial BCVA did not significantly differ between patients who had and those who had not received systemic or subconjunctival corticosteroids (p = 0.627).
In all patients who had lumbar puncture, no statistical difference was observed in final visual outcome between eyes in which a CSF lymphocytic reaction was diagnosed (final BCVA 0.46 [range 0–0.5] logMAR) and eyes with no evidence of CSF abnormalities (0.23 [range –0.2 to 2.3] logMAR). We also studied differences in syphilis trends regarding visual outcomes in 2013, 2014, and 2015. We observed no significant differences in visual recovery over time (p = 0.5783). In 13 patients for whom >3 months of follow-up was available for laboratory testing, quantitative VDRL screening was reported to decrease, except in 1 patient who had recurrence of uveitic syphilis because of an interruption in antiretroviral therapy (online Technical Appendix Table 2).