We compared children who were positive for Ebola virus disease (EVD) with those who were negative to derive a pediatric EVD predictor (PEP) score. We collected data on all children <13 years of age admitted to 11 Ebola holding units in Sierra Leone during August 2014–March 2015 and performed multivariable logistic regression. Among 1,054 children, 309 (29%) were EVD positive and 697 (66%) EVD negative, with 48 (5%) missing. Contact history, conjunctivitis, and age were the strongest positive predictors for EVD. The PEP score had an area under receiver operating characteristics curve of 0.80. A PEP score of 7/10 was 92% specific and 44% sensitive; 3/10 was 30% specific, 94% sensitive. The PEP score could correctly classify 79%–90% of children and could be used to facilitate triage into risk categories, depending on the sensitivity or specificity required.
The Ebola virus disease (EVD) outbreak in West Africa claimed >11,000 lives with nearly 30,000 cases (1). During the outbreak in Sierra Leone, patients arriving at healthcare facilities were screened for EVD using World Health Organization (WHO) case definitions. Those fulfilling the case definition for suspected EVD were admitted to Ebola holding units (EHUs) to have blood taken for EVD testing and receive medical care until test results were available (Technical Appendix[PDF - 1.06 MB - 11 pages] Figure 1). Testing was usually performed offsite, with a turnaround time for results of ≈48 hours (2). During admission, however, EVD-negative patients risked exposure to EVD, raising concerns that EHUs could act as amplification sites for infection (3–7). Children, many of whom were unaccompanied, were particularly vulnerable, and, because EHUs were overstretched, supervision to minimize the risk of cross-infection was challenging (4,8).
An accurate case definition for suspected EVD is critical for future outbreaks. Insufficient sensitivity of case definitions results in EVD-positive patients not being isolated, risking onward transmission in the community. There is an inherent tension between the public health priority to maximize the sensitivity of the case definition (minimizing onward transmission risk) and the individual patient’s perspective. The trade-off made by lower specificity means that many EVD-negative patients are kept waiting in EHUs for test results, risking nosocomial infection and delaying treatment for their true underlying condition. Case definitions should be flexible because priorities may change as outbreaks progress. In the 2014–2015 epidemic, the proportion of patients testing positive decreased over time: in October 2014, 77% of those admitted to a Freetown EHU tested positive, versus 1% in April 2015 (5).

We collected data on all children <13 years of age admitted to 11 EHUs in Sierra Leone (August 2014–March 2015) and built training and validation datasets. We performed multivariable logistic regression on the training dataset to generate a pediatric Ebola predictive (PEP) score, which we tested on the validation dataset. The age cutoff matched the WHO case definition distinguishing between children and adolescents, anticipating that adolescents would have an adult disease phenotype. Settings and data collection methods have been described previously (4,10). We visited each EHU to extract data from paper clinical records, case investigation forms, and site admission books and to interview staff. We cross-referenced data with the Western Area Ebola Response Centre (WAERC) database and 4 further sources, and single-entered data into a password-protected database (Epi Info version 7.1.4; US Centers for Disease Control and Prevention, Atlanta, GA, USA) (Technical Appendix[PDF - 1.06 MB - 11 pages]). We removed personal identifiers before analysis and developed a schema for record matching across databases (Technical Appendix[PDF - 1.06 MB - 11 pages]). We obtained ethics approval for this study from the Sierra Leone Ethics and Scientific Review Committee and the London School of Hygiene and Tropical Medicine Ethics committee (reference 8924).

We used Stata version 14.0 (StataCorp LLC, College Station, TX, USA) to perform analyses and limited analysis to children with EVD laboratory test result data. Variables were sex, age, contact history (yes/no), presence of 16 symptoms at EHU admission (yes/no), and days from symptom onset to EHU visit (4). We included age as a binary variable (<2 years and >2 years), given the higher burden of febrile illnesses that appear similar to EVD (e.g., malaria) in younger children. We considered data to be missing from the analysis if no value had been entered in the source documents (i.e., neither yes nor no).
Descriptive analysis of the cohort comprised the number of children with data available for each variable and the prevalence of signs and symptoms by laboratory-confirmed EVD status. We estimated the proportion of children (for whom we had sufficient data) who met the late-2014 WHO case definition.

Predictive Model Building and Validation and Development of Risk Score

We split the data randomly into 2 datasets with equivalent proportions of laboratory-confirmed EVD-positive children: a training dataset for predictive score building, and a validation dataset to assess score performance (11). Using the training dataset, we calculated crude odds ratios (ORs) of association between potential predictive variables and outcome (laboratory-confirmed EVD status) and created an initial multivariable model including all potential predictive variables. A final training model was obtained by removing variables with p>0.3 from the fully adjusted model in a backward-stepwise fashion. The variables retained for constructing candidate PEP scores were age, gender, contact history, days from first symptoms to admission, and whether all symptoms were systematically documented (Technical Appendix[PDF - 1.06 MB - 11 pages]).
We created the PEP score by assigning integer scores to variables in the validation dataset on the basis of their regression coefficients in the training dataset model (score = 1 for coefficients <1, score = 2 for coefficients >1) (12). We calculated each child’s overall PEP score by adding together the integer scores for the variables present, which resulted in possible PEP scores of 0–10. To identify the most clinically useful PEP score, we computed the sensitivity, specificity, positive predictive value, negative predictive value, and percentage of children correctly classified (compared with the standard of laboratory confirmation of EVD) of each candidate PEP score. Fully calculating the validity of the WHO case definition would require data on false negatives (those turned away at screening who had EVD), but these data were not available. We compared the PEP score with the WHO case definition as accurately as the available data permitted for completeness (Technical Appendix[PDF - 1.06 MB - 11 pages]).
To explore the potential effects of PEP scores on the number of correct and incorrect admissions at different times in the epidemic, we applied 2 PEP scores with different levels of sensitivity and specificity to 2 hypothetical populations of children: early in the epidemic when the proportion of suspected cases testing positive in Western EHUs was 77% (high background prevalence, October 2014); and later in the epidemic when the proportion was 4% (low background prevalence, March 2015). We used these hypothetical background prevalences with the sensitivity and specificity for each score to calculate number of true positives and negatives and false positives and negatives obtained by applying each score (Technical Appendix[PDF - 1.06 MB - 11 pages]Tables 2–5) (5). We used multiple imputation by chained equations to account for missing data in the analysis of training and validation datasets (Technical Appendix[PDF - 1.06 MB - 11 pages]) (13). 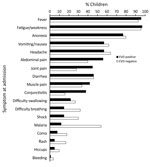 Figure 2. Frequency of clinical features in children positive and negative for Ebola virus disease (unadjusted) at an Ebola holding unit, Sierra Leone, August 14, 2014–March 31, 2015.
Children who were EVD negative were younger (median age 3 years [IQR 1–7 years] vs. 6 years [IQR 3–10 years]; p<0.001) (Table 1) and less likely to have conjunctivitis (p<0.001) than those who were EVD positive. Rash was more common in EVD-negative children (p<0.001) (Table 1; Figure 2). Similar proportions of both groups received antimicrobial and antimalarial drugs, and whereas both spent a median of 2 days in an EHU (admission to death or transfer/discharge), those with EVD tended to stay longer (p<0.001) (Table 1).

Figure 3. Receiver operating characteristics curve for final pediatric Ebola predictive score model based on a cohort of children who attended an Ebola holding unit and had Ebola virus disease test results recorded,...
Randomly splitting the cohort of 1,006 children generated training and validation datasets of 504 and 502 (descriptive, crude, and adjusted analysis in Technical Appendix[PDF - 1.06 MB - 11 pages] Table 6). In the training cohort, positive contact (multivariable OR 9.1, 95% CI 4.9–17); age >2 years (multivariable OR 2.9, 95% CI 1.4–5.8); and conjunctivitis (multivariable OR 3.8, 95% CI 1.9–7.8) were the strongest positive predictors of EVD. Headache, difficulty breathing, difficulty swallowing, and rash were negative predictors. The final multivariable predictive model included 12 variables: gender; age; positive contact; and presence or absence at hospital visit of fever, diarrhea, conjunctivitis, anorexia, abdominal pain, headache, difficulty breathing, difficulty swallowing, and rash. We present only analysis of the complete records, based on the similarity of receiver operating characteristics (ROC) curves for imputed and complete records analyses (Technical Appendix[PDF - 1.06 MB - 11 pages] Table 7; Figure 3).
Assigning predictive model values derived from the training dataset to the validation dataset gave a range of PEP scores of 0–10. Plotting the ROC curve as sensitivity (x) against 1 − specificity (y) for all individual child PEP scores (with sensitivity and specificity calculated using the laboratory test as standard) demonstrated that the model had excellent discriminative ability (area under ROC curve = 0.80; Figure 3) (14). The model coefficients, p values, and assigned integer PEP scores are shown in Table 2 and the sensitivity, specificity, positive and negative predictive values, and percentage correctly classified for all possible PEP scores within the validation dataset in Table 3. A PEP score of 1 was 97% sensitive (95% CI 89%–100%) and 4% specific (95% CI 1%–8%), whereas the maximum PEP of 10 was 5% sensitive (95% CI 1%–13%) and 99% specific (95% CI 96%–100%) (Table 3).
We considered the effect of using different PEP scores at different times during the outbreak. PEP score 3 (sensitivity of 94% and specificity of 30%) at the high background prevalence time point would have correctly classified 79 patients, with 16 EVD-negative patients admitted unnecessarily and 5 EVD-positive patients being incorrectly not admitted (Table 4; Technical Appendix[PDF - 1.06 MB - 11 pages] Tables 2,3). Using a PEP score of 7 (sensitivity 44% and specificity 92%) at the low background prevalence time point would have correctly classified 90/100 patients, with 8 unnecessary admissions and 2 true EVD-positive patients incorrectly not admitted (Table 4; Technical Appendix[PDF - 1.06 MB - 11 pages] Tables 4,5). Because we only have the true EVD status of patients who were admitted despite screening negative by WHO case definition (not the much larger number who were WHO case definition negatives and not admitted), the sensitivity and specificity calculated may be unreliable (Technical Appendix[PDF - 1.06 MB - 11 pages]). However, on the basis of the data available, the WHO case definition was estimated to be 98% sensitive and 5% specific (Table 3; Technical Appendix[PDF - 1.06 MB - 11 pages] Tables 8,9).


DOI: 10.3201/eid2402.171018
1Preliminary results from this study were presented at the 26th European Congress of Clinical Microbiology and Infectious Diseases, Amsterdam, Netherlands, April 9–12, 2016; and the 34th Annual Meeting of the European Society for Pediatric Infectious Diseases, Brighton, UK, May 10–14, 2016.
2These authors contributed equally to this article.
Publicado por salud equitativa en 11:23