By Dr Ananya Mandal, MD,January 11, 2018
BRCA gene mutation has been associated with cancers such as breast cancer. The BRCA gene mutation detection had resulted in a prophylactic double mastectomy for actress Angelina Jolie anticipating cancer. Now a new study has shown that having a BRCA gene mutation and being diagnosed with breast cancer does not raise the risk of death after diagnosis. The study was published in the latest issue of the journal The Lancet Oncology. 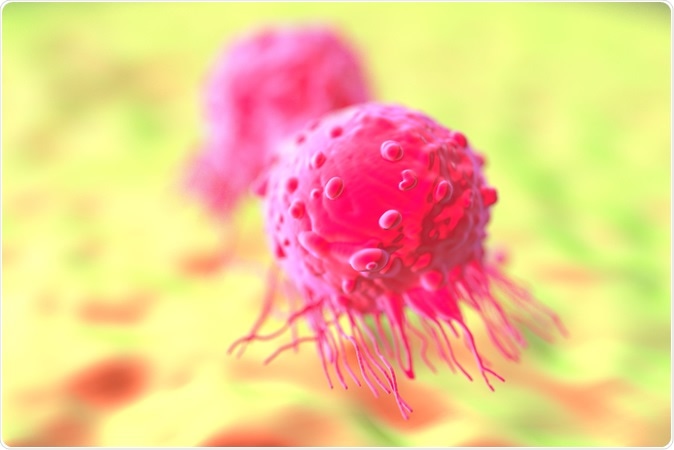 Image Credit: Royaltystockphoto.com / Shutterstock
In fact women who have this mutation may have a better chance of survival compared to those who those who have the cancer and do not have the mutation. Women who are triple negative in their tests for breast cancers are harder to treat and have a poorer outcome from their cancer finds the latest study. Study co-author Bryony Eccles of the University of Southampton explained that women who are diagnosed with early breast cancer and have the BRCA gene mutation are offered a double mastectomy at diagnosis or right after they have had their chemotherapy. Those who are non carriers of this mutation are not on the other hand. She said that this study reveals that it is not immediately necessary along with other treatment among those with BRCA mutation.
Eccles and her colleagues recruited 2,733 British women between ages 18 and 40 years for this study. They had been diagnosed with breast cancer between 2000 and 2008. They found that 12 percent of these women carried the BRCA1 or BCRA2 gene mutation. Most of these women had had chemotherapy for their cancer. A complete mastectomy or removal of breast was found in half of the participants while most of the other half had had a breast conserving surgery where only the cancer was removed and the rest of the breast was spared. Very few women had had no surgery to remove the breasts.

The records of all of these women were examined and followed up and it was noted that 678 of these women died eventually over the follow up period and of these 651 died due to breast cancer over the 8 years. BRCA gene mutation per se did not raise the risk of death among these women found the researchers on statistically analyzing these findings. Overall survival for two, five or even ten years after diagnosis remained same for both women with and without the BRCA gene mutation. They noted that 73 percent of women with the BRCA mutation lived for 10 years after diagnosis and 70 percent of women who did not have the mutation lived for 10 years after diagnosis.
Women who had BRCA mutation as well as were triple negative had a higher survival in the initial two years after diagnosis. So these women may choose to opt for a delayed surgery of at least a year or two after initial chemotherapy to allow them to recover. This delay would not change their overall survival chances, say researchers. The surgery however would be beneficial among the BRCA mutation carriers in order to prevent a new breast or ovarian cancer from developing over long term.
BRCA1 and BRCA2 genes are responsible for repairing damaged DNA. 1 in 400 individuals are said to have mutations in these genes wherein the corrections and repairs in the DNA are not made. This raises the risk of getting certain cancers such as breast and ovarian cancers. The risk of getting cancers in 55 to 65 percent among women with BRCA1 mutation and 45 percent among those who also have a BRCA2 mutation according to the National Cancer Institute.
Reference: http://www.thelancet.com/journals/lanonc/article/PIIS1470-2045(17)30891-4/fulltext?elsca1=tlpr
Publicado por salud equitativa en 11:52