To help developing countries address the issues that are emerging as their HIV epidemics evolve, Fogarty and NIH partners will support new awards in HIV research training.
>> Full article

Fogarty and its partners at NIH are awarding $5.3 million in grants to develop research bioethics expertise in low- and middle-income countries.
>> Full article

Participants in the Global mHealth Research Training Institute, hosted by Fogarty's Center for Global Health Studies, discussed how best to use mobile technologies to improve health in the developing world.
>> Full article

A team of scientists and program managers led by NIH has been studying a variety of implementation science approaches to prevent mother-to-child transmission of HIV and has published the results in a 16-article open-access supplement to the Journal of Acquired Immune Deficiency Syndromes.
>> Full article 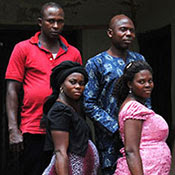 Also in this issue