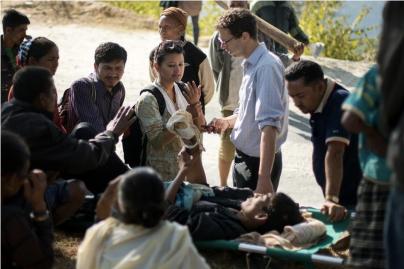 Caption: Duncan Maru (right) and Community Health Director Ashma Baruwal (left) evaluating a patient in rural Nepal.
Credit: Allison Shelley
A decade ago, as a medical student doing volunteer work at a hospital in India’s capital of New Delhi, Duncan Maru saw a young patient who changed the course of his career: a 12-year-old boy in a coma caused by advanced tuberculosis (TB). Although the child had been experiencing TB symptoms for four months, he was simply given routine antibiotics and didn’t receive the right drugs until his parents traveled hundreds of miles at considerable expense to bring him to a major hospital. After five weeks of intensive treatment, the boy regained consciousness and he was able to walk and talk again.
That’s quite an inspiring story. But it’s also a story that haunted Maru because he knew that if this boy had access to good primary care at the local level, his condition probably never would have become so critical. Determined to help other children and families in similar situations, Maru has gone on to dedicate himself to developing innovative ways of providing high-quality, low-cost health care in developing areas of the world. His “lab” for testing these efforts? The South Asian nation of Nepal—specifically, the poverty-stricken, rural district of Achham, which is located several hundred miles west of the national capital of Kathmandu.
Maru is the founder of Possible, a non-governmental organization that currently manages Achham’s health care system through a public-private partnership with Nepal’s Ministry of Health and Population. Since 2008, Possible has treated over 170,000 patients in Achham with its web of community health workers, clinics, government hospitals, and a referral network. To help make this happen, Possible rebuilt the Bayalpata Hospital, which stood in ruins after being abandoned three decades ago. The ultimate goal is to develop a new system of health care that, if successful, could serve as a national and perhaps even a global model.
Supported by a 2014 NIH Director’s Early Independence Award, Maru plans to use Bayalpata Hospital as a testing ground for three interventions aimed at improving health and survival among children living in the area. If these interventions prove successful, they will be extended to patients of all ages throughout Nepal.
The first intervention will focus on more effective follow-up and management of chronic health conditions. Many chronic diseases such as HIV, TB, and diabetes, for example, require regular care and, without it, become disabling or even deadly. As a physician and epidemiologist, Maru has studied a variety of rural health care systems in Asia, finding that many lack established protocols for treating chronic conditions and/or for following up with patients after their initial visit.

Duncan Maru
To help address this issue, Maru and his colleagues have launched a program to create an integrated electronic health record that will capture lab results, X-rays, and other health, lifestyle, and environmental data gathered from a patient at the hospital, clinic, and home. Such a record may help doctors, nurses, and community health care workers better coordinate patient care, as well as consult with medical specialists located an exhausting 30-hour drive away in Kathmandu.
Maru’s team is also training Nepalese community health workers on how to follow infants delivered at Bayalpata Hospital. This effort involves the workers making regular house calls to monitor the baby’s health, conduct household surveys, and check that the child is receiving all necessary medicines, vaccines, and therapies on a regular basis. Such information is entered via a smart phone into the patient’s electronic health record, where it will enable Maru and future researchers to track the newborns’ health status throughout their lives.
The second of Maru’s interventions will study the effects of changing the management system at Bayalpata Hospital. In many rural hospitals in India and Nepal, the head male physician is also tasked with managing staff, finances, and procurement of supplies. This system frequently leads to havoc. To free up the head physician to focus more on patient care, Maru’s team restructured the hospital’s organization to place administrative matters into the hands of non-physicians.
The final intervention is training health care professionals in basic medical practices so the care that children receive is more consistent. For example, for each particular disease or injury, the health care workers are being taught to follow a specific protocol.
Maru admits that these interventions may sound just like common sense. However, it is important that such changes are rigorously tested and proven to improve health and mortality outcomes on a relatively small scale before being implemented on a widespread basis. Currently, Maru’s research project is focused on the 45,000 people who live in the area closest to Bayalpata Hospital. Within two years, however, the project will expand to serve all 250,000 inhabitants of Achham district.
In addition to its work in Achham, Maru’s team recently signed an agreement with the Nepalese government to deploy a similar approach in the Dolakha district, a region that was hard hit by the 7.3 magnitude earthquake that struck on May 12. Because of the quake, about 40 percent of Dolakha’s population now has no access to health care and 87 percent of its health care facilities have been damaged or destroyed.
Still, Maru is not stopping there. He hopes that the base of knowledge generated by his research will serve to revitalize and rebuild health care systems not only in rural Nepal, but in needy areas all around the globe.
Links:
Duncan Maru (Possible, New York and Achham, Nepal)
NIH Director’s Early Independence Award Program
‘Building Back Better’ After an Earthquake (Duncan Maru and Senendra Uprety, Washington Post)
Access, Excess, and Medical Transformation: Delivering Durable Health Care in Rural Nepal (Duncan Maru and Padam Chand, Health Affairs Blog)
NIH Support: Common Fund