If I Only Had a Brain? Tissue Chips Predict Neurotoxicity | NIH Director's Blog

If I Only Had a Brain? Tissue Chips Predict Neurotoxicity | NIH Director's Blog 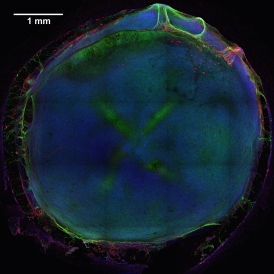 Caption: 3D neural tissue chips contain neurons (green), glial cells (red), and nuclei (blue). To take this confocal micrograph, developing neural tissue was removed from a chip and placed on a glass-bottom Petri dish.
Credit: Michael Schwartz, Dept.  of Bioengineering, University of Wisconsin-Madison
A lot of time, money, and effort are devoted to developing new drugs. Yet only one of every 10 drug candidates entering human clinical trials successfully goes on to receive approval from the Food and Drug Administration (FDA) [1]. Many would-be drugs fall by the wayside because they prove toxic to the brain, liver, kidneys, or other organs—toxicity that, unfortunately, isn’t always detected in preclinical studies using mice, rats, or other animal models. That explains why scientists are working so hard to devise technologies that can do a better job of predicting early on which chemical compounds will be safe in humans.
As an important step in this direction, NIH-funded researchers at the Morgridge Institute for Research and University of Wisconsin-Madison have produced neural tissue chips with many features of a developing human brain. Each cultured 3D “organoid”—which sits comfortably in the bottom of a pea-sized well on a standard laboratory plate—comes complete with its very own neurons, support cells, blood vessels, and immune cells! As described in Proceedings of the National Academy of Sciences [2], this new tool is poised to predict earlier, faster, and less expensively which new or untested compounds—be they drug candidates or even ingredients in cosmetics and pesticides—might harm the brain, particularly at the earliest stages of development.
To make these brainy structures in miniature, the researchers, led by stem cell pioneer James Thomson, began by seeding neural progenitor cells onto a synthetic hydrogel, a substance not unlike clear Jell-O. The hydrogel provided those young cells with the right environment to grow and differentiate into neurons and neural support cells, which reliably self-assemble into structures that resemble a very early stage of human brain development. Several days later, the researchers added in vascular and immune cell precursors, mimicking the normal recruitment of blood vessels and specialized immune cells, called microglia, in the fetal brain. The finished neural constructs include all of the major functional components of a human brain, woven together into a surprisingly complex, living organoid. That’s a far cry from a simple layer of brain cells in a dish!
Next, to see how their tiny models of the human brain respond to various chemicals, the researchers exposed the neural tissue chips to 60 compounds—about half with known neurotoxic effects, and the rest considered harmless to the brain—and measured the activity of 19,000 genes in each organoid by RNA sequencing. The sequencing data reflect the genomic activity within the organoid following exposure to each of the 60 compounds. They then used an approach called machine learning in which a computer is “trained” to recognize patterns in the data that distinguish toxic versus non-toxic chemical exposures. The computer-built predictive model turned out to be quite accurate, although not perfect. After training, the model successfully used RNA signatures to classify as either toxic or non-toxic nine out of 10 chemicals that it had not previously seen.
The researchers say they’re now working to improve the accuracy of their model by expanding to include more chemical compounds. They also are aiming to automate the process so that all of the steps—from growing the neural constructs to collecting samples for sequencing—can be completed by a laboratory robot.
While these neural constructs appear to have a bright future in drug development, they also hold great promise for evaluating the neurotoxicity of non-pharmacologic chemicals and for understanding the processes associated with normal and abnormal brain development. This comes as especially promising news amid growing concerns about autism and other neurodevelopmental disorders, which might be linked in some cases to environmental chemicals [3].
This new work features just one of many projects made possible by the Tissue Chip for Drug Screening program, a joint effort of NIH, the FDA, and the Defense Advanced Research Project Agency (DARPA). With the support of this program, research teams around the country are working to develop chips representing all of the major organ systems. The ultimate goal is an integrated “human-on-a-chip,” which can be used to test the effects of drugs or other chemicals before any testing in humans.
References:
[1] Clinical development success rates for investigational drugs. Hay M, Thomas DW, Craighead JL, Economides C, Rosenthal J. Nat Biotechnol. 2014 Jan;32(1):40-51.
[2] Human pluripotent stem cell-derived neural constructs for predicting neural toxicity. Schwartz, MP, Hou Z, Propson, NE, Engstrom CJ, Costa, VS, Jiang P, Nguyen BK, Bolin JM, Daly W, Wang Y, Stewart R, Page CD, Murphy WL, Thomson JA. PNAS. 2015 Sep 21. [Epub ahead of print]
[3] Neurobehavioural effects of developmental toxicity. Grandjean P, Landrigan PJ. Lancet Neurol. 2014 Mar;13(3):330-338.
Links:
James Thomson (University of Wisconsin, Madison)
Morgridge Institute for Research (Madison, WI)
Tissue Chip for Drug Screening (National Center for Advancing Translational Sciences/NIH)
NIH Support: National Center for Advancing Translational Sciences; National Institute of Biomedical Imaging and Bioengineering