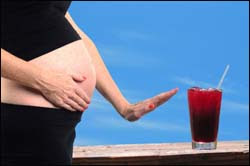 During 2011–2013, one in 10 pregnant women reported consuming alcohol in the past 30 days and one in 33 reported binge drinking; similar to nonpregnant women, about one third of pregnant women who consume alcohol engage in binge drinking. Among all women who reported binge drinking, pregnant women reported a higher frequency of binge drinking than nonpregnant women. One possible explanation for this might be that women who binge drink during pregnancy are more likely to be alcohol-dependent than the average female binge drinker, and therefore binge drink more frequently. A recent U.S. study found that among adult binge drinkers, the prevalence of alcohol dependence increased significantly with the frequency of binge drinking (4). Women who binge drink during pregnancy and are not alcohol-dependent would benefit from alcohol screening and brief intervention, which involves screening patients using validated questions, followed by a brief counselling intervention to advise patients who screen positive to set goals and take steps toward reducing their alcohol consumption (3,5). Patients with more severe alcohol problems should be referred for specialized care (3). Since previous research found no significant difference in binge drinking frequency between pregnant and nonpregnant binge drinkers, future surveillance should monitor the frequency of binge drinking to see if this pattern persists (6). Consistent with previous reports, the prevalence of alcohol consumption among pregnant women was higher among those with a college degree than among those with less education (6). This might be related to higher discretionary income among women with college degrees, or social acceptability of alcohol consumption and binge drinking established during college years, or a combination of these or other determinants.
The prevalence of any alcohol use and binge drinking among pregnant and nonpregnant women in this study is slightly higher than estimates reported for 2006–2010 (6). The differences in estimates between the two periods are likely related to methodological changes in the BRFSS in 2011, rather than actual shifts in the prevalence of alcohol use (7). Specifically, the BRFSS began sampling respondents using cellular phones in addition to landline phones, and changed the weighting method from poststratification to "raking" (iterative proportional fitting) (7). These changes have been associated with a higher estimated prevalence of excessive alcohol use among U.S. adults (7).
The findings in this study are subject to at least five limitations. First, self-reported alcohol use is generally underreported (8). Second, pregnancy status might also have been underreported because a majority of women do not recognize they are pregnant until at least 4 weeks gestation (9). Third, some prevalence estimates and ratios of binge drinking among pregnant women had to be suppressed because of unreliable estimates (relative standard errors >0.3). Fourth, the results could be subject to selection bias since the median response rate was <50% for all 3 years. Finally, changes in BRFSS methodology in 2011 did not allow estimates from 2011–2013 to be compared with estimates from earlier years.
There is a need for a comprehensive approach to reduce alcohol use and binge drinking among pregnant women, and binge drinking among women of childbearing age. Healthy People 2020 established objectives†† to increase the percentage of pregnant women reporting abstinence from any alcohol use to 98% (MCH 11.1), and to increase the percentage reporting abstinence from binge drinking to 100% (MCH 11.2). The Community Preventive Services Task Force recommends several population-level strategies for reducing excessive alcohol consumption and related harms. These include limiting alcohol outlet density (the number of places in a given area where alcohol may be legally sold for onsite consumption), holding alcohol retailers liable for harms related to the sale of alcohol to minors and intoxicated patrons (dram shop liability), and increasing alcohol taxes (10). The U.S. Preventive Services Task Force also recommends alcohol screening and brief intervention in primary care settings for persons aged ≥18 years, including pregnant women (5). Under the Affordable Care Act, many health insurance plans cover alcohol screening and brief intervention at no cost to the insured.§§ In addition, CDC funded and is working with Fetal Alcohol Spectrum Disorders Practice and Implementation Centers and National Partners¶¶ to promote systems level practice changes among providers, through training and implementation of evidence-based FASD prevention approaches. Adopting this comprehensive approach to reduce excessive alcohol use among pregnant women and women of childbearing age is an important step toward achieving the Healthy People 2020 objectives of reducing alcohol use among pregnant women, and ultimately reducing FASDs and other alcohol-related adverse birth outcomes.

* Excessive alcohol use includes binge drinking (≥4 drinks on an occasion for women, ≥5 drinks on an occasion for men), high weekly consumption (≥8 drinks a week for women, ≥15 drinks a week for men), any alcohol consumption by pregnant women, or any alcohol consumption by those under the minimum legal drinking age of 21 years.
† Additional information available at https://wayback.archive-it.org/3926/20140421162517/http://www.surgeongeneral.gov/news/2005/02/sg02222005.html

.
§ Women who might be pregnant include those who are trying to get pregnant, and those who are not trying to get pregnant, but are nonsterile, sexually active, and not effectively using contraception.
¶ Beginning in 2011, BRFSS surveyed participants using both cellular and landline phones; before 2011, surveys were conducted over landline phones only.
** As calculated using the American Association of Public Opinion Research guidelines, the response rate is the number of respondents who completed the survey as a proportion of all eligible and likely eligible persons. As an alternate measure, the cooperation rate is the percentage of respondents interviewed among all eligible persons who were contacted. The median cooperation rate among states for the combined landline and cellular phone sample ranged from 65.7% to 73.8% for 2011–2013.
†† Additional Healthy People 2020 maternal, infant, and child health objectives are available at http://www.healthypeople.gov/2020/topics-objectives/topic/maternal-infant-and-child-health/objectives

.
§§ Alcohol screening and brief intervention (SBI) was given a grade B recommendation by the U.S. Preventive Services Task Force, meaning that under the Affordable Care Act, all non-grandfathered insurance plans must cover alcohol SBI at no cost to the person (Section 1001 of the Patient Protection and Affordable Care Act, Public Law 111-148, 2010, available at http://www.gpo.gov/fdsys/pkg/PLAW-111publ148/html/PLAW-111publ148.htm