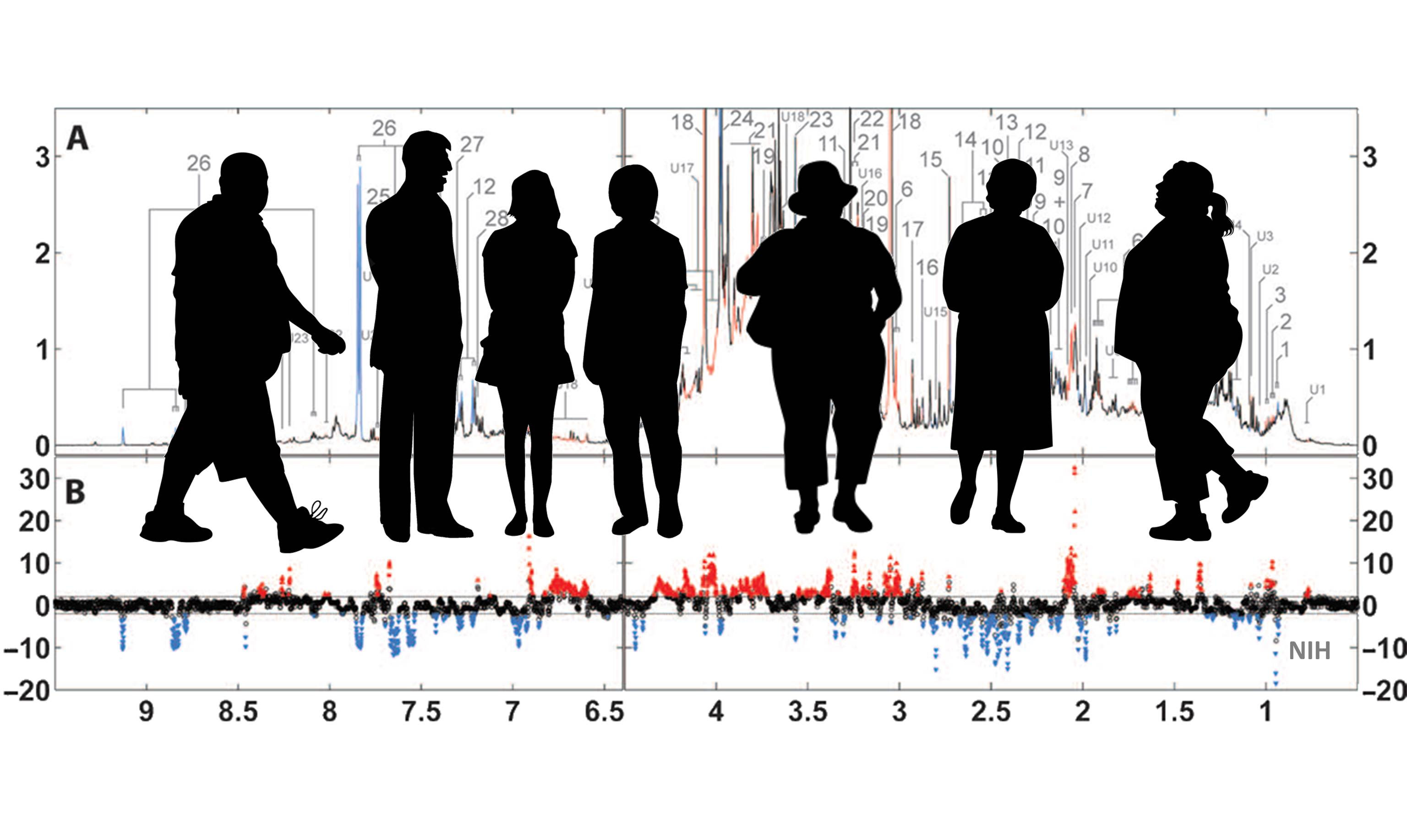 As obesity has risen in the United States and all around the world, so too have many other obesity-related health conditions: diabetes, heart disease, stroke, cancer, and maybe even Alzheimer’s disease. But how exactly do those extra pounds lead to such widespread trouble, and how might we go about developing better ways to prevent or […]

Credit: Adapted from Elliott, P et al., Sci Transl Med. 2015 Apr 29;7(285)
As obesity has risen in the United States and all around the world, so too have many other obesity-related health conditions: diabetes, heart disease, stroke, cancer, and maybe even Alzheimer’s disease. But how exactly do those extra pounds lead to such widespread trouble, and how might we go about developing better ways to prevent or alleviate this very serious health threat?
In a new study in Science Translational Medicine [1], researchers performed sophisticated analyses of the molecules excreted in human urine to produce one of the most comprehensive pictures yet of the metabolic signature that appears to correlate with obesity. This work provides a fascinating preview of things to come as researchers from metabolomics, microbiomics, and a wide variety of other fields strive to develop more precise approaches to managing and preventing disease.
To capture obesity’s metabolic signature, Jeremy Nicholson and Paul Elliott of the Imperial College London and their colleagues used two molecular analysis techniques—proton nuclear magnetic resonance spectroscopy and ion exchange chromatography—to analyze the urine of more than 2,300 people from the United States and Great Britain. In addition to urine samples collected over two 24-hour periods, the study gathered information on the participants’ diet, exercise habits, blood pressure, and body mass index (BMI), which is a measure of body fat based on height and weight.
It’s worth noting that the urine samples put to work in this new study had been safely stored in the freezer since their initial collection as part of the NIH-funded INTERMAP study [2], begun in 1995 with the goal of exploring the role of various dietary factors in blood pressure. Thus, important discoveries can sometimes be made by applying innovative tools and technologies to existing data and biological samples, providing they have been carefully collected, stored, and made available.
The new analysis uncovered changes to 29 molecular metabolites, or biomarkers, that correlated with obesity in 1,880 people from the United States. Most of those biomarkers—25 to be exact—also turned up in the urine of obese people from the other side of the Atlantic, offering confirmation that the findings represent a shared metabolic signature of obesity.
Several of the biomarkers are byproducts of what a person eats, which may reflect differences in the diets of obese and non-obese people. For example, urine from obese people was more likely to contain a metabolite that comes from eating red meat, while thinner folks were more likely to have a metabolite indicative of citrus fruit consumption.
However, not all of the biomarkers were directly related to food. Some appeared to stem from widespread changes in kidney function, skeletal muscle, and metabolism that may occur as a person packs on extra pounds. And, intriguingly, nine of the biomarkers significantly associated with obesity weren’t even produced by the human body, but rather by the trillions of microbes that live inside our guts. Those microbial partners play important roles in the breakdown of essential vitamins, amino acids, and protein. In fact, recent research findings suggest that a significant portion of obesity risk may be explained by the activity of gut microbes. This discovery adds to mounting evidence, spurred in recent years by the NIH-funded Human Microbiome Project, for the intricate and essential role of microbes—collectively known as the microbiome—in many aspects of our health.
These findings highlight the fact that obesity and associated diseases are the end result of a complex interplay between our genes, diets, lifestyles, and microbiomes. And, yet, despite this daunting level of complexity, they raise the intriguing possibility that people might one day be able to visit their health-care providers, receive a blood or urine test, and leave with precise, individualized information regarding their risk for a wide range of health consequences. Such metabolic readouts will also come in handy for researchers seeking to develop new strategies to prevent or treat obesity, perhaps by manipulating our resident microbes in one way or another.
This is yet another example of the advances anticipated as the Precision Medicine Initiativeencourages a more thorough exploration of individual variability in genes, environment, metabolism, and lifestyle—and the application of such valuable information to virtually all areas of health and disease.
As we look ahead, let’s not forget that the best way to keep our weight in check for now—and surely into the future too—is to follow this simple advice: Eat a healthy diet that avoids taking in more calories than you can burn, and follow a regular exercise program.
References:
[1] Urinary metabolic signatures of human adiposity. Elliott, P, Posma, JM, Chan, Q, Garcia-Perez, I, Wijeyesekera, A, Bictash, M, D Ebbels, TM, Ueshima, H, Zhao, L, van Horn, L, Daviglus, M, Stamler, J, Holmes, E, Nicholson, JK. Sci Transl Med. 2015 Apr 29;7(285).
[2] INTERMAP: International Population Study on Macronutrients and Blood Pressure. ClinicalTrials.gov
Links:
Weight control (National Library of Medicine/NIH)
Calculate your body mass index (National Heart, Lung, and Blood Institute/NIH)
Paul Elliott (Imperial College London)
Jeremy Nicholson (Imperial College London)
Human Microbiome Project (NIH)
Precision Medicine Initiative (NIH)
NIH Support: National Heart, Lung, and Blood Institute