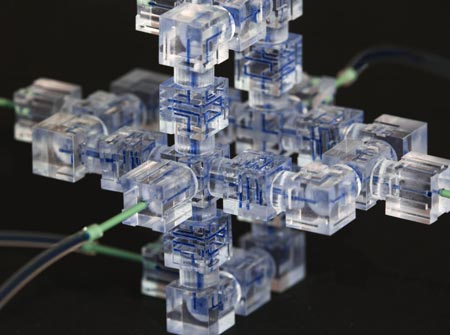 Credit:  Viterbi School of Engineering, University of Southern California
Just as the computational power of yesterday’s desktop computer has been miniaturized to fit inside your mobile phone, bioengineers have shrunk traditional laboratory instruments to the size of a dime. To assemble a “snap lab” like the one you see above, all scientists have to do is click together some plastic components in much the same way that kids snap together the plastic bricks in their toy building sets.
The snap lab, developed by an NIH-funded team led by Noah Malmstadt at the University of Southern California (USC) Viterbi School of Engineering, Los Angeles, is an exciting example of a microfluidic circuit—tiny devices designed  to test just a single drop of blood, saliva, or other fluids. Such devices have the potential to make DNA analysis, microbe detection, and other biomedical tests easier and cheaper to perform.
Malmstadt’s cool design was born from his frustration with existing 2D microfluidic devices, which can be expensive and often take months to produce because they have to be built in a special “clean room,” a controlled environment with low levels of airborne dust, microbes, particles, and chemicals. His new modular microlab is made of 1-centimeter, transparent plastic cubes that are fabricated in a regular lab using a simple 3D printer. These cubes can be quickly snapped together by hand to form a wide range of configurations, enabling researchers to create  their own custom-designed 3D microlabs in just a matter of hours [1].
In addition to convenience and cost savings, there are scientific advantages to this modular design approach. It allows scientists to mix, split, and route biological samples in various ways to combine them with particular reagents. Because of the 3D architecture and clever liquid routing, multiple experiments also can be performed simultaneously. Ultimately, the USC team hopes to launch an open-source website where researchers can share their ideas for the design of labs utilizing microfluidic cubes.
Reference:
[1] Discrete elements for 3D microfluidics. Bhargava KC, Thompson B, Malmstadt N. Proc Natl Acad Sci U S A. 2014 Oct 21;111(42):15013-8.
Links:
Malmstadt Lab (University of Southern California, Los Angeles)
NIH Support: National Institute of General Medical Sciences