My son, Jordan, was born on January 28, 2000 weighing 8 lbs. 14 oz. He was a beautiful baby and our first. Unbeknownst to us and the doctors and nurses who attended him, he was afflicted with a rare genetic disease. No one understood the signs - vomiting after birth, disinterest in nursing, rapid breathing, and stuffy nose.
Written by JillF, published 10 days ago. 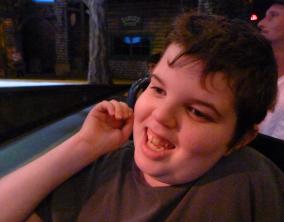 Jordan was sent home on the third day after his birth. We tried feeding him and he just wasn't interested and acted like he didn't like the taste. How could we have known that the protein in the milk was poisoning him, causing elevated ammonia levels in his blood and acidosis. The next morning we visited the pediatrician and his temperature was 93.6 degrees and he was lethargic. He was down to 7 pounds 12 ounces and the pediatrician immediately contacted Evanston Hospital to inform them that we were on our way. After numerous labs and being hooked up to IV fluids, we were told he probably had a metabolic disorder.
The doctors were able to get the acidosis under control; however, his ammonia levels went from 500 to 1050 and he was transported to Children's Memorial Hospital in Chicago for hemodialysis. After two catheter surgeries, they were finally able to perform the hemodialysis and get the ammonia levels under 300. Jordan survived the procedure, but was in a coma and hooked up to everything including a respirator. We were sad and confused and didn't realize the seriousness of the condition until the doctors came back with the diagnosis.
He was diagnosed with Propionic Acidemia (PA). The high ammonia levels and acidosis caused swelling in his brain resulting in an irregular EEG and he was put on a therapeutic dose of Phenobarbital to protect him from seizures. Jordan was sent home at 3-½ weeks and started vomiting the next day. By early morning, he was breathing heavy so we took him to our local ER to find out that my ammonia was back to 300. Transport arrived to take him back to Children's Memorial. For the next three weeks of trial and error and fluctuating ammonia levels between 40 and 200, the doctor made adjustments to the formula. The formula consisted of Similac with iron, Propimex 1, Mead Johnson 80056, and amino acid solutions. He was getting 1.25 g/kg of protein per day in addition to Carnitine, biotin, poly vi sol, and iron.
At three months old, Jordan was alert, active, smiling, cooing, and developmentally delayed. He started batting at toys and holding his head up. Jordan received speech therapy, occupational therapy, physical therapy and developmental therapy once each week.
The first 18 months were the hardest with regular formula changes and multiple hospitalizations for various reasons – often unknown. He never wanted to eat and had a g-tube placed around 6 months old. He has had pancreatitis a couple of times and was recently hospitalized for 10 days with pancreatitis. Managing PA has gotten easier as we have gotten to know the "signs" to look for and what to do proactively.
Flash forward… Jordan just turned 15 years old in January 2013. His formula has changed many times and he is 100% g-tube fed. He is on a medication for prolonged QT, a heart condition related to PA. He is a very happy and loving child. Jordan loves to surf youtube and play on his iPad (his favorite app is Tiger Woods Golf). He plays buddy soccer , basketball, and boxing (more like warm up exercises!!) He loves to cuddle and give hugs. He has a few sounds and word approximations and uses a communication device (NovaChat 7) to express himself. Cognitively, he is like a toddler. He goes to high school in a self-contained special education classroom and has a 1:1 nurse. Jordan's high school has an amazing "buddies" program and he loves participating in the buddy events. A couple months ago they had a skating party and had sleds for anyone that couldn't skate. Jordan loved being pushed around on the ice in a sled since his ankles are too weak to attempt ice skates. The buddies also came to our house to play soccer with him.
His prognosis for the future is still uncertain. What is certain is that he will need continued medical care, monitoring, and therapy to maintain his condition. He continues to amaze us by doing new things and he is a miracle and we cherish each moment.