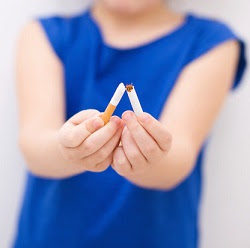 
Mary Puckett, PhD1,2, Antonio Neri, MD2, Trevor Thompson2, J. Michael Underwood, PhD2, Behnoosh Momin, MS, MPH2, Jennifer Kahende, PhD3, Lei Zhang, PhD3,Sherri L. Stewart, PhD2 (Author affiliations at end of text)
Smoking caused an average of 480,000 deaths per year in the United States from 2005 to 2009 (1), and three in 10 cancer deaths in the United States are tobacco related (2). Tobacco cessation is a high public health priority, and all states offer some form of tobacco cessation service. Quitlines provide telephone-based counseling services and are an effective intervention for tobacco cessation (3). In addition to telephone services, 96% of all U.S. quitlines offer Web-based cessation services.* Evidence is limited on the number of tobacco users who use more than one type of service, and studies report mixed results on whether combined telephone and Web-based counseling improves long-term cessation compared with telephone alone (4,5). CDC conducted a survey of users of telephone and Web-based cessation services in four states to determine the cessation success of users of these interventions. After adjusting for multiple variables, persons who used both telephone and Web-based services were more likely to report abstinence from smoking for 30 days at follow up (odds ratio = 1.3) compared with telephone-only users and with Web-only users (odds ratio = 1.5). These findings suggest that states might consider offering both types of cessation services to increase cessation success.
All CDC-funded tobacco control programs following North American Quitline Consortium Minimum Dataset requirements† were invited to apply for study participation, and four state-managed tobacco cessation programs (Alabama, Arizona, Florida, and Vermont) were selected by CDC to ensure a diverse mix of geography, tobacco control contexts, and cessation service providers. Participants in these four programs were recruited to participate in the study at the time of service enrollment as part of their first interaction with the service and were offered an incentive of $40 for completed study participation. Participants enrolling in either the state telephone or Web-based service were asked at enrollment during July 2011–February 2012 their age, sex, race/ethnicity, education level, marital status, how old they were when they started smoking, how many cigarettes they smoked per day, whether or not they smoked a cigarette within 5 minutes of waking, and whether or not they lived in a household with another smoker. Information was gathered by a standard questionnaire that could be completed via Web, mail, or telephone. Participants were asked at follow-up 7 months after enrollment whether they had smoked in the past 30 days, and 30-day point prevalence abstinence (PPA) was defined as the proportion answering "no" to this question. Participants were also asked whether they had used the other state-provided cessation service (telephone or Web-based); those answering "yes" to this question were categorized as dual-service users.
A total of 16,332 participants were initially eligible for the study, and of those, 7,901 participants completed a follow-up questionnaire, for a response rate of 48%. Participants who completed a follow-up questionnaire >9 months after enrollment, did not give informed consent, or did not report quit attempt status, were excluded from this analysis (n = 2,508). After these exclusions, 5,393 (33%) participants were included in the analytic sample; this included 2,238 telephone, 1,848 Web-based, and 1,307 dual-service users. Bivariable analyses assessed differences in self-reported telephone, Web, and dual-service user groups for demographic and smoking characteristics. Chi-square tests were used to evaluate differences in proportions, and t-tests were used to evaluate differences in means. Multivariable logistic regression was used to identify factors associated with 30-day PPA for dual-service users compared with single-service users. Continuous variables with a nonlinear relationship to 30-day PPA (total interactions with service and cigarettes smoked per day) were modeled using three-knot restricted cubic spline functions (6). Statistically significant differences were determined at α=0.05.
Dual-service users were younger than telephone-only users but older than Web-only users (with mean ages of 44 years versus 47 years and 40 years, respectively) (Table 1). Dual-service users also differed in terms of race/ethnicity (p=0.03 to <0.01), with dual-service users more closely resembling telephone-only than Web-only users, and education level (p<0.01), with a higher percentage of dual-users having at least a high school education than telephone-only users but a lower percentage than Web-only users. There were no statistically significant differences between dual-service users compared with telephone-only or Web-only users by sex. For smoking characteristics, dual-service users did not differ significantly from telephone-only or Web-only users for age of smoking initiation or cigarettes smoked per day. They did differ, however, from Web-only users, with a higher percentage of dual-users reporting having their first cigarette within five minutes of waking (p<0.01) and a lower percentage who lived in a household with another smoker (p=0.04). A greater proportion of dual-service users reported abstinence from smoking within the previous 30 days at follow-up 7 months post-enrollment (38%) compared with telephone (34%) and Web-based (29%) users.
In an unadjusted model, dual-users had 1.18 times the odds (95% confidence interval = 1.04–1.34) of being abstinent for the past 30 days versus telephone users and 1.51 times the odds (95% confidence interval = 1.32–1.73) of being abstinent compared with Web-based users (Table 2). When controlling for demographic variables, the interaction of marital status and the presence of another smoker in the household was significant in the model. Participants who were partnered had increased odds of 30-day PPA if no other smokers were present in the household. Furthermore, dual-service users had 1.31 times (95% confidence interval = 1.12–1.54) the odds of reporting smoking abstinence for the past 30 days at 7 months post-enrollment compared with telephone-only users, and 1.54 times (95% confidence interval = 1.31–1.82) the odds compared with Web-only users.

Dual-service users had demographic and smoking characteristics similar to telephone-only and Web-only users. However, single-service users had significantly lower odds of cessation success compared with dual-service users. This suggests that availability and combined use of telephone-only and Web-based services might enhance quit success, but it might also reflect a greater commitment to quit among persons who use both services.
Although the effectiveness of telephone-only services is well-established, information regarding effectiveness of Web-based services is less conclusive (3,7). A randomized controlled trial of Web-based cessation services showed no increase in cessation success over a placebo (8). However, use of multiple Web-based programs in a separate randomized control trial showed increased odds of tobacco cessation (9), and a 2013 study of Web-based cessation for health professionals showed increased tobacco cessation with service use (10). This study adds to the body of evidence to support the possibility of an additional cessation benefit from using both types of cessation services.
Users of telephone, Web-based, or dual-service cessation interventions differed in terms of age, race/ethnicity, education level, and marital status, and public health practitioners can take this information into account when establishing or reviewing tobacco cessation programs for their target population. Public health practitioners can also use this information to promote the use of additional services to those who have already engaged in one service to increase the likelihood of cessation. These findings can also be used by physicians, who often serve as an initial counselor for patients seeking to quit tobacco use, based on their particular patient population. Ultimately, public health practitioners, including those at state and local public health programs, and health care providers can use this information to determine the best tobacco cessation programs to offer based on the demographics and needs of the regions they serve.
The findings in this report are subject to at least seven limitations. First, participants were from four states, which limits the generalizability of the results. Second, because the study was not initially designed to determine differences between dual-service and single-service use, participants initially chose only one intervention mode, which might have contributed to a selection bias against tobacco cessation service users who initially planned to use both types of cessation services, and therefore reduced the number of participants in this category in the study. Third, although total interactions with the primary cessation service were controlled for in the multivariable analysis, data were unavailable for total interactions with the other state-provided cessation service by dual-service users. Fourth, all data are self-reported and subject to limitations associated with recall and social desirability. Fifth, the study focused on cigarette smoking and did not include those who used other forms of tobacco, such as smokeless tobacco, hookah, or e-cigarettes. Sixth, the use of additional interventions (other than telephone-based and Web-based services) might affect measured cessation success if use differed by intervention group. However, analyses of additional cessation practices did not yield significant differences between dual-service users and single-service users, which suggests this limitation might have little effect on the results presented in this report. Finally, information bias might have affected the results because of the way participants and states were selected to participate and because of the low response rate of 48% and the final participation rate of 33%.
Tobacco use is a leading preventable cause of mortality from lung cancer, cardiovascular disease, and other diseases. These findings suggest that access to and use of both cessation services might improve tobacco cessation success. Use of Web-based and telephone cessation services in combination provides a new tool for public health programs, such as CDC's National Comprehensive Cancer Control Program, to prevent lung cancer. As such, tobacco and cancer control programs might choose to focus on implementation and improvement of both types of cessation services in their populations.
1Epidemic Intelligence Service, CDC. 2Division of Cancer Prevention and Control, National Center for Chronic Disease Prevention and Health Promotion, CDC.3Office on Smoking and Health, National Center for Chronic Disease Prevention and Health Promotion, CDC (Corresponding author: Mary Puckett,mpuckett1@cdc.gov, 770-488-6451)