Protect Your Family from Radon

Testing is the only way to know if radon levels are high in your home. Read how CDC’s Tracking Programs are improving radon exposure maps to inform testing in their states and find out more information about testing your home for radon.

Radon is a gas that you cannot see, smell, or taste. According to the U.S. Environmental Protection Agency (EPA), radon causes about 20,000 cases of lung cancer each year, making it the second leading cause of lung cancer after smoking. Radon can seep up from the ground and become trapped in buildings. The EPA recommends taking action to reduce radon in buildings that have a radon level at or above 4 picocuries per liter (pCi/L) of air. Testing is the only way to know if radon levels are high in a particular home or office.
CDC funds 26 state and city tracking programs as part of the National Environmental Public Health Tracking Network (Tracking Network). Several tracking programs have worked with national and state partners to improve radon exposure risk maps to better inform radon testing in their states.

The Washington Tracking Program worked with state geologists to develop a new, more detailed radon exposure risk map for the state. This map identified areas of low, medium, and high risk of radon exposure based on soil and rock types. Tracking staff also gathered state-wide radon testing data from national testing companies as well as data from the state radon program. These data were used to produce maps that showed testing results by ZIP code. Tracking program added radon content to the Washington tracking portal that included maps of radon test data and exposure risk. Layering these maps showed new, previously unknown hot spots, such as around the Puget Sound. It also showed many high to moderate risk areas where no testing had been performed in the past. 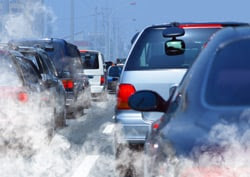 Meghan’s step-daughter reading in her bedroom.

Radon Awareness Leads Tracking Employee to Test Her Own Home

Meghan works in the Washington Tracking Program. While helping with the radon mapping project, she realized that the home she and her family recently moved into was in a high-risk area for radon and should be tested. Testing revealed an elevated radon level in the basement room her step-daughter had chosen as her bedroom. Acting on the test results, the family took the simple, recommended steps to mitigate the radon. Adding a fan and keeping the bedroom door open as much as possible to increase air circulation helped to lower the radon level and keep Meghan's family safe.
"I'm so happy we discovered the high radon levels quickly and not after many years of exposing our children to them," said Meghan.
Visit the EPA's radon website to find out more information about testing your home for radon.