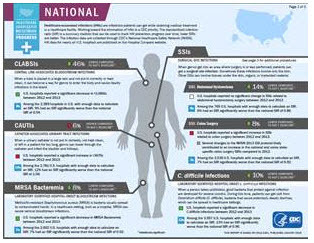 According to a report released today by the Centers for Disease Control and Prevention (CDC), progress has been made in the effort to eliminate infections that commonly threaten hospital patients, including a 46 percent decrease in central line-associated bloodstream infections (CLABSI) between 2008 and 2013. However, additional work is needed to continue to improve patient safety. CDC’s Healthcare-associated Infections (HAI) progress report is a snapshot of how each state and the country are doing in eliminating six infection types that hospitals are required to report to CDC. For the first time, this year’s HAI progress report includes state-specific data about hospital lab-identified methicillin-resistant Staphylococcus aureus (MRSA) bloodstream infections and Clostridium difficile (C. difficile) infections (deadly diarrhea).
The annual National and State Healthcare-associated Infection Progress Report expands upon and provides an update to previous reports detailing progress toward the goal of eliminating HAIs.
To view the report and additional information about preventing healthcare-associated infections, visit CDC’s website:www.cdc.gov/hai. 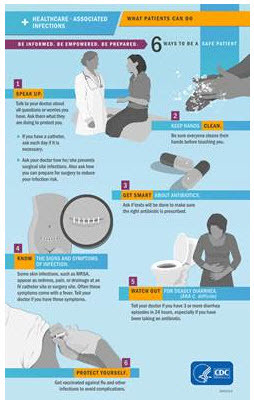 ) set in 2009 by the U.S. Department of Health and Human Services (HHS). Progress is measured using the standardized infection ratio (SIR), a summary statistic used to track HAI prevention progress over time. Despite progress, the nation did not reach the 2013 goals. More action is needed at every level of public health and health care to improve patient safety and eliminate infections that commonly threaten hospital patients.
Top