Timing of Influenza A(H5N1) in Poultry and Humans and Seasonal Influenza Activity Worldwide, 2004–2013

Co-circulation of influenza A(H5N1) and seasonal influenza viruses among humans and animals could lead to co-infections, reassortment, and emergence of novel viruses with pandemic potential. We assessed the timing of subtype H5N1 outbreaks among poultry, human H5N1 cases, and human seasonal influenza in 8 countries that reported 97% of all human H5N1 cases and 90% of all poultry H5N1 outbreaks. In these countries, most outbreaks among poultry (7,001/11,331, 62%) and half of human cases (313/625, 50%) occurred during January–March. Human H5N1 cases occurred in 167 (45%) of 372 months during which outbreaks among poultry occurred, compared with 59 (10%) of 574 months that had no outbreaks among poultry. Human H5N1 cases also occurred in 59 (22%) of 267 months during seasonal influenza periods. To reduce risk for co-infection, surveillance and control of H5N1 should be enhanced during January–March, when H5N1 outbreaks typically occur and overlap with seasonal influenza virus circulation.
Co-circulation of influenza A viruses in human and animal reservoirs can provide opportunities for these viruses to reassort and acquire genetic material that facilitates sustained human-to-human transmission, a necessary trait of pandemic viruses (1). One influenza strain at the forefront of pandemic preparedness planning is highly pathogenic avian influenza (HPAI) A(H5N1) virus. Asian-lineage H5N1 viruses emerged in domestic birds in Southeast Asia in 1996 and are now endemic in 5 countries (2). As of December 2013, H5N1 virus outbreaks have been documented among domestic poultry and wild birds in >60 countries (3,4). The spread of H5N1 among the world’s domestic poultry population increases the risk for H5N1 to infect humans.
Humans are at risk for H5N1 infection if they have direct or close contact with infected domestic poultry, such as by handling sick animals or their byproducts, caregiving, slaughtering, and butchering; infection can also occur through some forms of indirect contact (e.g., proximity to live poultry or wet markets) (5,6). During 2003–2013, more than 645 human cases of HPAI H5N1 were confirmed; the case-fatality rate was ≈60% (7). H5N1 viruses have not yet acquired the ability to be transmitted between humans beyond 3 generations, therefore failing to show sustained human-to-human transmission (8). However, these viruses have wide geographic distribution and the potential to reassort with human seasonal influenza viruses. These characteristics mean that clarifying the timing of H5N1 outbreaks among poultry and infections in humans may be useful for prevention and control activities.
Recently published data suggest a seasonal pattern to H5N1 virus infection among domestic and wild birds (5,9–13). Park et al. noted that H5N1 outbreaks among poultry and infections in humans in Southeast Asia occurred in the cooler months during 1997–2006 (9). Other studies from Southeast Asia have suggested that decreasing temperatures may correlate with an increase in the number of H5N1 outbreaks among birds (14,15). Although ecologic studies suggest that H5N1 virus activity may occur during predictable times of the year, a systematic analysis of global poultry and human H5N1 data has not tested this hypothesis. In this study, we explored whether H5N1 outbreaks among domestic poultry and human H5N1 cases occurred in temporal proximity, occurred during certain climate conditions, or overlapped with human seasonal influenza epidemics.

Timing of H5N1 Outbreaks among Poultry

To describe the temporal patterns of H5N1 outbreaks among poultry worldwide, we extracted the number of monthly outbreaks reported by 52 countries as immediate notifications to the World Organisation for Animal Health (OIE) during January 2004–December 2013 (16). We used the reported onset month as the occurrence month for each outbreak. Egypt and Indonesia stopped submitting immediate notifications of new H5N1 outbreaks among poultry after H5N1 in poultry was declared endemic: for Egypt in July 2008, and for Indonesia in September 2006. To obtain the number of monthly outbreaks for these countries, we extracted the number from their OIE biannual disease reports. If only the number of new cases but not the number of outbreaks in which they occurred was reported, we classified the month as having 1 outbreak.
For each country and year, we designated the peak month of H5N1 activity as the month that had the largest number of reported H5N1 outbreaks among poultry. Next, we identified the average peak month of H5N1 activity for each country (e.g., if the peak months in a hypothetical country occurred during January 2010, February 2011, and March 2012, then the average peak month during this period would have been February for this country).

To determine whether cool ambient temperature was associated with the number of poultry H5N1 outbreaks, we abstracted monthly mean temperature data for each country from the US National Oceanic and Atmospheric Administration or from the Vietnam General Statistics Office (20,21). We used linear regression models to determine whether the monthly number of poultry H5N1 outbreaks and number of human H5N1 cases were negatively associated with mean monthly temperature and precipitation (e.g., after accounting for the absolute value of each country’s central latitude [19] and 2-way interactions) (22).

During January 2004–June 2013, a total of 12,610 poultry H5N1 outbreaks in 52 countries were reported to the OIE. Fifteen of these countries also reported laboratory-confirmed H5N1 cases in humans to WHO. Of these 15 countries, 8 (Bangladesh, Cambodia, China, Egypt, Indonesia, Thailand, Turkey, and Vietnam) accounted for 11,331 (90%) of worldwide poultry H5N1 outbreaks. These 8 countries served as the basis for our analyses. Four of the 8 countries (Bangladesh, China, Egypt, and Turkey) are classified as Northern Temperate or Subtropical countries because most of their land mass is north of the Tropic of Cancer (latitude 23.27°). The other 4 countries (Cambodia, Indonesia, Thailand, and Vietnam) are classified as tropical because they are located between the Tropics of Cancer and Capricorn (Table). 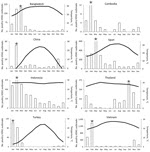 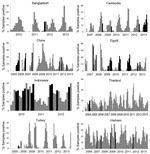 Figure 4. Human cases of highly pathogenic avian influenza A(H5N1) infection and seasonal influenza rates for 8 study countries, by month. Bars indicate the proportion of human respiratory samples that tested positive for...
Seasonal influenza was epidemic in 267 (30%) of 888 months for which data were available. Human H5N1 cases occurred in 59 (22%) of these 267 months (Figure 4).

Our study reaffirms that, in Southeast Asia, H5N1 outbreaks among poultry and human H5N1 cases often occur seasonally, during months when temperatures are relatively cool. Even when accounting for H5N1-endemic countries outside Southeast Asia, most (>50%) poultry H5N1 outbreaks and human H5N1 cases of H5N1 infection occurred during January–March. Human and animal health officials in affected countries should consider exploring the value of enhanced surveillance, flock biosecurity, and live bird market disinfection and/or rest days during periods when H5N1 viruses are typically detected (22–24).
Our analysis of 2004–2013 data from 8 countries also suggests that lower ambient temperatures are associated with H5N1 outbreaks among poultry, even though half of our data came from tropical countries, where annual temperature variations are often small. These results are similar to those described by Park and Glass, who observed poultry H5N1 outbreaks during 1997–2006 in Southeast Asia and China and concluded that these outbreaks most often occurred during colder months (10). Other studies have found similar associations (5,25,26). A decrease in temperature can make poultry more susceptible to H5N1 because lower ambient temperature can decrease poultry immunity (27–29). Moreover, cold weather may enable prolonged viral survival in the secretions and feces of infected poultry, and anticipation of seasonal holidays (e.g., Chinese New Year) often results in increases in population density of domestic poultry and in trafficking of poultry (27–34).
Human H5N1 cases were almost 5 times more common in months during which poultry H5N1 outbreaks occurred. These findings reaffirm reports that human H5N1 virus infection is typically preceded by exposure to sick or dead poultry (35) and suggest that human and animal health officials in affected countries should explore the effectiveness of education and outreach efforts before and postexposure prophylaxis during anticipated H5N1 epidemic periods. These efforts could further enhance surveillance of H5N1 in poultry and lead to more prompt culling of poultry when H5N1 viruses are detected, thus helping to increase flock biosecurity and enable timely education and outreach efforts. For example, affected countries may want to evaluate the cost-effectiveness of targeted risk communication campaigns delivered before peak months of H5N1 infection to promote the avoidance of sick or dead poultry, the importance of hand washing, and the appropriate use of personal protective equipment among subpopulations that frequently are in contact with poultry. These efforts could help mitigate the transmission of H5N1 viruses among poultry and the spread of the virus to human populations (22–24).
Our data also suggest that one fifth of human H5N1 cases occurred in months during which seasonal influenza was epidemic. Concurrent H5N1 and human seasonal influenza activity provides opportunities for humans and other animals (e.g., swine) to become co-infected with these co-circulating viruses and for the viruses to reassort. Reassortment may generate novel influenza A virus strains with the ability to cause sustained human-to-human transmission.
Our findings support and demonstrate the feasibility of integrating human and animal surveillance for avian influenza and other zoonotic diseases. Combining the expertise from multiple surveillance systems can increase the detection rate of H5N1 cases in humans from 57% to 93% and of epizootics from 40% to 53% (36). This recommendation for an integrated H5N1 surveillance approach enables better prediction of disease risk and identification of outbreaks (37). Such approaches can assist in filling in gaps in human and animal surveillance systems (36, 37).
This study has several limitations. H5N1-endemic countries are not required to report immediate notifications. H5N1 reports also often are limited because of a lack of resources for surveillance, laboratory capacity to confirm H5N1, and, often, the political will to report outbreaks in poultry that may result in substantial economic losses (38). No formal case definition for a poultry H5N1 outbreak has been developed. During our study period, surveillance practices for human and poultry H5N1 and human seasonal influenza were not standardized; in fact, outbreaks among poultry might be more likely to be reported during periods when human H5N1 cases occurred. Further standardization of surveillance and reporting of influenza outbreaks in humans and animals might help clarify the epidemiology of these viruses (19).
Health authorities in H5N1 virus–affected countries should consider enhanced surveillance for H5N1 viruses among domestic poultry and humans in anticipation of cooler months, when H5N1 virus outbreaks are most likely to occur. Although year-round surveillance is important for the identification of novel strains of influenza, laboratorians should emphasize the identification, reporting, and sharing of nonsubtypable influenza A viruses during January–March. Public and animal health authorities may consider enhancing animal market surveillance during this time frame and encourage the use of personal protective equipment, disinfectant, and other resources for containment and mitigation in anticipation of increased H5N1 activity among poultry (22–24). These lessons may also be relevant to the management of avian influenza A(H7N9) virus outbreaks in China, which have occurred during similar times of the year.
Dr. Durand is an Epidemic Intelligence Service Officer with the Influenza Division of the US Centers for Disease Control and Prevention. Her research interests include influenza and other infectious diseases.