We provide a data-driven method for optimizing pharmacy-based distribution of antiviral drugs during an influenza pandemic in terms of overall access for a target population and applied it to the state of Texas, USA. We found that during the 2009 influenza pandemic, the Texas Department of State Health Services achieved an estimated statewide access of 88% (proportion of population willing to travel to the nearest dispensing point). However, access reached only 34.5% of US postal code (ZIP code) areas containing <1,000 underinsured persons. Optimized distribution networks increased expected access to 91% overall and 60% in hard-to-reach regions, and 2 or 3 major pharmacy chains achieved near maximal coverage in well-populated areas. Independent pharmacies were essential for reaching ZIP code areas containing <1,000 underinsured persons. This model was developed during a collaboration between academic researchers and public health officials and is available as a decision support tool for Texas Department of State Health Services at a web-based interface.
Influenza pandemics occur when novel strains of the influenza virus emerge in human populations and spread worldwide (1). There were 3 influenza pandemics in the 20th century (1918, 1957, and 1968), and 1 has occurred so far in the 21st century (2009). The 1918 Spanish flu pandemic was far more severe than the others, causing an estimated 50 million deaths globally (2). In contrast, the 2009 pandemic had an estimated death toll of 284,000 (3). Experts conjecture that the risk for new pandemics will increase in the coming decades (4), and several emerging threats are already under surveillance. A highly pathogenic avian influenza A (H5N1) virus has occasionally been infecting humans in Asia, Africa, and Europe since 1997 (5); the first human case in North America was reported in January 2014 (6). Since March 2013, China has been trying to contain an ongoing outbreak of a highly pathogenic avian influenza (H7N9) virus (7,8).
The primary control measures for pandemic influenza are antiviral medications and vaccines (9), as well as nonpharmaceutical interventions, such as social distancing measures, school closures, and hygienic precautions (10). Although the efficacy of influenza vaccines depends on factors such as patient age and virus type/subtype (11), these vaccines are arguably the best intervention strategy (1). However, because development and deployment of effective vaccines for a new influenza virus may take several months (12), antiviral drugs and nonpharmaceutical interventions are particularly critical for early pandemic control.
Antiviral drugs are believed to reduce disease severity and duration of infectiousness in individual patients, if taken sufficiently early (9), and to protect contacts of infected persons, if taken prophylactically (13–15). Some studies have suggested that aggressive treatment policies can effectively mitigate local transmission (16,17). In preparation for future influenza pandemics, the US Department of Health and Human Services therefore maintains a large Strategic National Stockpile (SNS) of antiviral drugs (18), and most states include SNS antiviral drugs as a major component of their pandemic response plans (19–22).
After detection of the new influenza A(H1N1)pdm09 virus in April 2009, the US government declared a public health emergency, and the World Health Organization declared a global influenza pandemic. Vaccines became widely available after 6 months of sustained transmission (23). In the early weeks of the pandemic, the US Department of Health and Human Services distributed 11 million courses of federally held SNS antiviral drugs to states (24) and issued a series of guidelines for implementing antiviral drug and nonpharmaceutical interventions. During the pandemic, many states sought to work in cooperation with retail pharmacies and independent drug stores to assist in dispensing their shares of the SNS and state caches (19–22). The Texas Department of State Health Services (DSHS) enlisted the help of several major pharmacy chains and independent retail pharmacies to dispense >200,000 antiviral drug courses from the SNS and state cache (25). A report analyzing the pandemic response indicated that additional planning was required to ensure that persons residing in counties in Texas lacking pharmacies can obtain antiviral drugs when needed (26).
We propose a method for optimizing the location of dispensing points for antiviral drugs within a state. Several state pandemic response plans include the following goals: using commercial pharmacies as antiviral drug-dispensing partners to limit strain on hospitals; reaching a population of broad demographics, including underinsured populations; and improving convenience. These states include Virginia (19), Louisiana (20), Florida (21), Tennessee (22), and Texas (25). These plans further specify that the choice of participating chains will depend on their location and local demographics, and they include strategies for reaching the underinsured population at minimal or no cost.
Working with Texas DSHS, we developed a data-driven facility-location model for designing commercial pharmacy antiviral drug distribution networks that maximizes access to underinsured populations, when access is based on a willingness-to-travel model estimated from National Household Travel Survey data (27). We describe the model that is now available to the Texas DSHS as a Web-based decision-support tool for future pandemics (28), and we use it to evaluate and optimize the commercial pharmacy distribution network established in Texas during the 2009 influenza pandemic. 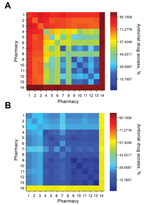 Figure 3. Antiviral drug access in underinsured populations for single-chain and 2-chain pharmacy distribution networks during the 2009 influenza pandemic, Texas, USA. Each network contains a maximum of 723 distribution points, and was...
Mr. Singh is a PhD student in the Graduate Program in Operations Research and Industrial Engineering at The University of Texas at Austin. His research interests include optimization and its applications to public policy and decision making.

We thank Michael Poole for sharing data and providing first-hand perspectives on deployment of SNS antiviral drugs in Texas during the influenza pandemic during 2009.
This study was supported by the National Institutes of Health (Models of Infectious Disease Agent Study grant U01 GM087719-01).