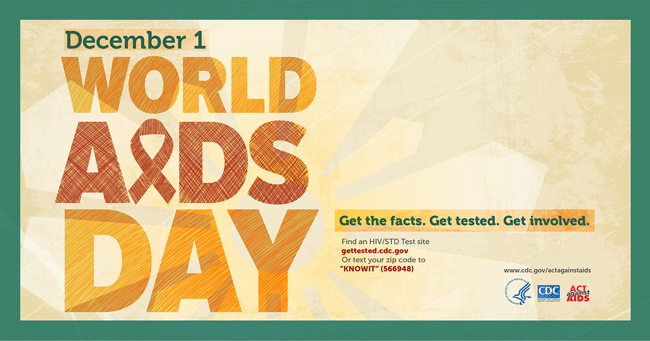 Dear Colleague,
December 1st is World AIDS Day, a time to pause and reflect on the global and domestic impact of HIV. Worldwide, there are about 35.3 million people living with HIV, with nearly three-fourths of the 2.1 million new HIV infections occurring in sub-Saharan African countries each year. In the United States, approximately 1.2 million people are living with HIV and about 50,000 new infections occur each year.
The three key goals of the United States National HIV/AIDS Strategy (NHAS) are reducing the number of new HIV infections, increasing access to care and improving health outcomes for people living with HIV, and reducing HIV-related health disparities. For people with HIV, early diagnosis and access to treatment can lead to viral suppression, which can improve health, increase life expectancy, and reduce the chance of transmitting the virus to others. In July 2013, President Obama issued an executive order designed to accelerate progress toward these goals and increase the number of people living with HIV who are in treatment and virally suppressed.
Last week, the Centers for Disease Control and Prevention (CDC) released its latest report on the HIV Continuum of Care in a new edition of Vital Signs, which includes a Morbidity and Mortality Weekly Report (MMWR), Vital Signs: HIV Diagnosis, Care, and Treatment Among Persons Living with HIV — United States, 2011 and an accompanying fact sheet, HIV Care Saves Lives, Viral Suppression is Key . According to the Vital Signs report, 86% of the 1.2 million people living with HIV in the United States were diagnosed, 40% were in HIV medical care, and 30% had achieved viral suppression. In addition, almost half (49%) of young people aged 18-24 living with HIV did not know they had the virus, and only 13% of those aged 18-24 had achieved viral suppression compared with 37% of those over 65 years of age.
Our tasks are clear: reach out to the 14% of people living with undiagnosed HIV—especially young people—to ensure they are tested; increase the overall number of people getting and staying in HIV care, and increase the percentage of people living with HIV who achieve viral suppression. These goals could be achieved by expanding HIV testing efforts so that all people living with undiagnosed HIV learn and know their status, and increasing the percentage of people linked to and engaged in HIV medical care. We need to make progress across the HIV care continuum to offer testing, early treatment, and the support services that can help people living with HIV to stay in care. State and local health departments, community-based organizations, and health care providers all play important roles in implementing the changes that will improve outcomes along this continuum.
CDC recently released HIV Treatment Works, a new campaign under the Act Against AIDS initiative encouraging people living with HIV to Get in care, Stay in care, and Live well. This campaign focuses on helping people living with HIV get into care, start taking HIV medications, remain in care, and adhere to treatment. The campaign website provides information and resources that you can use to help increase the proportion of people living with HIV who enter and remain in care.
The theme of World AIDS Day 2014 is “Focus, Partner, Achieve: An AIDS Free Generation.” As members of the international community, we share responsibility for achieving an AIDS-free generation. CDC has made an unwavering commitment to work with our many partners and constituents to turn the tide on HIV/AIDS,both in the United States and all over the world. On this World AIDS Day, and every day, we are pleased to join with them in the ongoing effort to prevent the spread of HIV among this generation and generations to come.
Sincerely,
/Jonathan Mermin/
Jonathan H. Mermin, M.D., MPH
Director
National Center for HIV/AIDS, Viral Hepatitis, STD, and TB Prevention
Centers for Disease Control and Preventionwww.cdc.gov/nchhstp