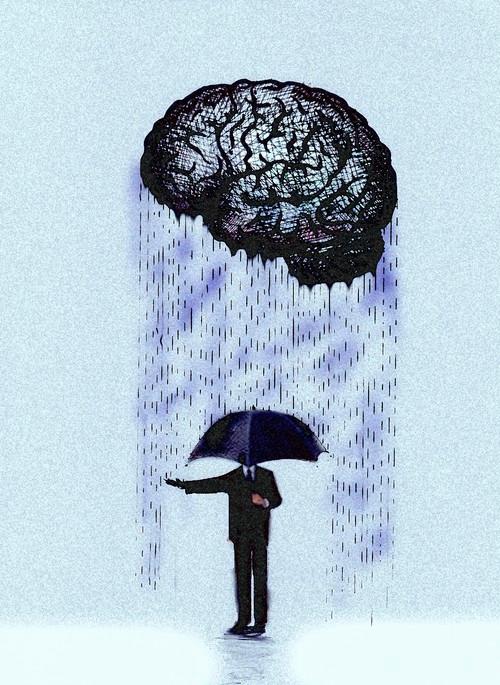 Almost 44 million adults experienced a mental illness last year. (Photo by Gary Waters/Ikon Images/Corbis)
In the hit series Homeland, Claire Danes plays Carrie Mathison, a high-functioning, quick-on-her-feet CIA agent who also has bipolar disorder. She initially hides her mental illness from her coworkers, but as the series progresses, she is forced to reveal her secret and cope with its implications. Spoiler alert: In this week’s episode, for example, Mathison learned that she was drugged by someone working with Pakistan’s intelligence service who swapped out her bipolar medication for pills that make her hallucinate.

Aside from the espionage and near-death experiences she frequently encounters, Mathison’s situation isn’t much different from that of many Americans diagnosed with mental illness, who lead full and productive lives with their condition. “I think a lot of people think of mental illness as the disheveled homeless man, or the person walking down the street [talking] to themselves, but it’s not. It’s your friend, it’s your neighbor, it’s the person down the street,” says Peter Delany, Ph.D., director of the Substance Abuse and Mental Health Services Administration (SAMHSA) Center for Behavioral Health Statistics and Quality. “It’s not just a few people, it’s a lot of people, and they struggle.”
In fact, a government study released today showed that 18.5 percent of American adults had a diagnosable mental illness in 2013.
Related: The Number One Health Risk for Successful Women
The new findings are based on survey responses from more than 67,800 people ages 12 and older, and reveal a picture of mental health that is vastly different from the stereotypes Delany cites. For one, in about three-fourths of mental illness cases, symptoms do not significantly interfere with a person’s life. Someone with severe depression might miss work because of an episode, Delany explains. And the highest rate of mental illness was among people ages 29 to 45, at nearly 22 percent.
Many people don’t get help for their condition, the study also found. Of the nearly 44 million people with mental illness in the U.S., about 45 percent received treatment in the previous year. Treatment rates were higher, at about 68 percent, among people with severe mental illness.
Nearly 4 percent of American adults, 9.3 million people in total, had serious suicidal thoughts in the past year. And 1.3 million actually attempted suicide, according to the survey.
Related: 8 Foods That Boost Your Mood
“Mental illness is a real health condition, and addressing it [will] help with all kinds of issues,” Delany says, adding that people with mental illness often also experience diabetes, high blood pressure and heart conditions. “It’s critical for everyone to know that there are effective, evidence-based interventions — both social, psychological and pharmaceutical — to help people deal with these problems.”
The uplifting message: Recovery is possible. “Just because you have a mental illness doesn’t mean that you can’t live a full life,” Delany stresses. “With proper treatment and support from your family and community, you can lead a healthy and active life.”
Consider these resources if you or someone you know is coping with a mental health issue:
Publicado por salud equitativa en 6:56