Study suggests screening methods beyond mammograms may be useful in high-risk patients
URL of this page: http://www.nlm.nih.gov/medlineplus/news/fullstory_123685.html
(*this news item will not be available after 07/02/2012)

Related MedlinePlus Pages
TUESDAY, April 3 (HealthDay News) -- New research suggests that adding an ultrasound or MRI scan to breast cancer screening if a woman has dense breasts and at least one other risk factor for breast cancer would increase the number of cancers found.
Dense breast tissue increases a woman's risk of developing breast cancer, and it also makes screening for breast cancer more difficult with standard mammography, previous research has found.
The addition of ultrasound to screening resulted in the detection of an additional 4.3 cancers per 1,000 women screened, and MRI resulted in an additional 14.7 cancers detected per 1,000 screened on average, according to the results of the new study. These cancers were found before they had spread to nearby lymph nodes.
"This is a very important time in breast cancer screening. Breast cancer is becoming more treatable, and now we have these extra tools to find cancers," said the study's lead author, Dr. Wendie Berg, a professor of radiology at the University of Pittsburgh School of Medicine, Magee-Womens Hospital.
But, she added that women need to be informed that while MRI and ultrasound are more sensitive tests that detect more breast cancers, these tests also come with the risk of false positives. "You have to be willing to accept the risk of extra testing," she said.
Results of the study are published in the April 4 issue of the Journal of the American Medical Association. Funding for the study was provided by the Avon Foundation and the U.S. National Cancer Institute.
The study included almost 2,700 women who underwent annual mammography and ultrasound for three years. At the end of three years, the women were offered the chance to undergo MRI screening, which requires the use of a special dye (injected through an intravenous line) and lying still in the enclosed MRI machine, which can be a problem for people who are uncomfortable in confined spaces. Just 58 percent of the women decided to undergo MRI.
All of the women included in the study had dense or extremely dense breast tissue. Berg noted that about 40 percent of women under 50 years old and 30 percent of women over 50 have dense breast tissue.
The women in the study also had at least one additional risk factor for breast cancer, according to Berg. Risk factors that indicate an intermediate risk of breast cancer include a personal history of breast cancer, a previous unusual breast tissue biopsy or an intermediate family history of breast cancer (meaning not someone in the immediate family).
Factors that indicate a high risk of breast cancer include having a known breast cancer gene, prior radiation treatment to the chest or an immediate family history of the disease. In women with a high risk, which is about 1 percent to 2 percent of women according to Berg, it's already recommended that they undergo MRI in addition to mammography.
What's been less clear is how best to screen women with dense breast tissue and an intermediate risk of cancer.
After three years, a total of 7,473 mammograms and ultrasounds were completed, and 612 women had completed MRIs. There were 111 breast cancers detected. Thirty-three were detected by mammogram alone, while 32 were found by ultrasound alone, and another 26 were found by both. Nine cancers were detected by MRI after women had already undergone mammography and ultrasound. Eleven cancers weren't detected by any of the screening methods -- they were found either by the women or their doctors discovering a lump.
As for false positive rates, Berg said that ultrasound resulted in an additional 7 percent recall rate, and 5 percent of those women had to have a biopsy. Only 7 percent of the biopsies detected cancer, she said. But for MRI, the recall rate was 20 percent and 7 percent of those women needed a biopsy. Just 19 percent of these biopsies found cancer, said Berg.
Berg pointed out that insurers may or may not pay for ultrasound screenings, and that requests for MRI screenings are often denied because of the significant cost of the test.
Commenting on the study findings, Dr. Stephanie Bernik, chief of surgical oncology at Lenox Hill Hospital in New York City, said: "Insurance companies probably won't pay for an MRI unless a woman is high risk. And, cost isn't always the bottom line. MRI does generate false positives, which aren't innocuous. They have their risks and complications."
Bernik recommended that women ask their doctors whether or not their mammography showed dense breast tissue. If you have dense breast tissue, she recommended asking your doctor if you should be getting a screening ultrasound as well. "There are risk factors other than dense breast tissue that factor into the decision, so ask your doctor if you need it," said Bernik.
Both Bernik and Berg noted that ultrasound screening for breast cancer isn't yet available everywhere, and that the quality of the test depends a lot on who's doing it.
SOURCES: Wendie Berg, M.D., Ph.D., professor of radiology, University of Pittsburgh School of Medicine and Magee-Womens Hospital, Pittsburgh; Stephanie Bernik, M.D., chief, surgical oncology, Lenox Hill Hospital, New York City; April 4, 2012, Journal of the American Medical Association

URL of this page: http://www.nlm.nih.gov/medlineplus/mriscans.html
Also called: Magnetic resonance imaging, NMR, Nuclear magnetic resonance
Magnetic resonance imaging (MRI) uses a large magnet and radio waves to look at organs and structures inside your body. Health care professionals use MRI scans to diagnose a variety of conditions, from torn ligaments to tumors. MRIs are very useful for examining the brain and spinal cord.

During the scan, you lie on a table that slides inside a tunnel-shaped machine. Doing the scan can take a long time, and you must stay still. The scan is painless. The MRI machine makes a lot of noise. The technician may offer you earplugs.
Before you get a scan, tell your doctor if you 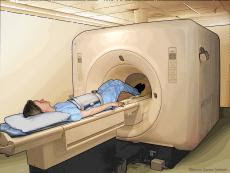