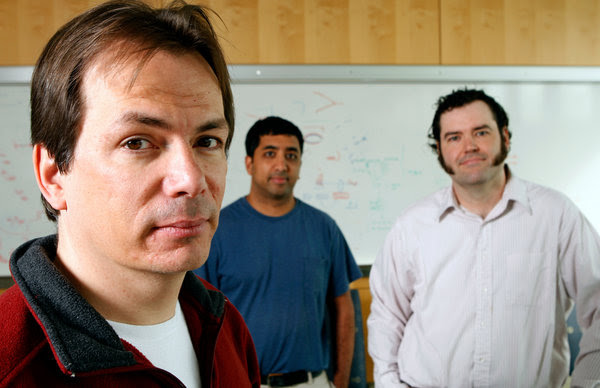 Kevin P. Casey for The New York Times
Members of a team conducting autism studies: from left, Evan E. Eichler, Dr. Jay A. Shendure and Brian O’Roak of the University of Washington.

Teams of scientists working independently have for the first time identified several gene mutations that they agree sharply increase the chances that a child will develop autism. They have found further evidence that the risk increases with the age of the parents, particularly in fathers over age 35.

The gene mutations are extremely rare and together account for a tiny fraction of autism cases — in these studies, only a handful of children. Experts said the new research gave scientists something they had not had: a clear strategy for building some understanding of the disease’s biological basis.

Scientists have been debating the relative influence of inherited risk and environmental factors in autism for decades, and few today doubt that there is a strong genetic component.
But biologists have groped in vain for a reliable way to clarify the underlying genetics of these so-called autism spectrum disorders, including Asperger syndrome and related social difficulties that are being diagnosed at alarmingly high rates — on average, in one in 88 children, according to a government estimate released last week.
Previous studies have produced a scattering of gene findings but little consensus or confidence in how to proceed.
The new research — reported in three papers posted online on Wednesday in the journal Nature — provides some measure of both, some experts said. There are probably hundreds, perhaps more than a thousand, gene variations that could disrupt brain development enough to result in social delays.
An intensified search for rare mutations could turn up enough of these to account for 15 percent to 20 percent of all autism cases, some experts say, and allow researchers a chance to see patterns and some possible mechanisms to explain what goes awry.
“These studies aren’t so much a breakthrough, because we knew this was coming,” said Jonathan Sebat, a professor of psychiatry and cellular and molecular medicine at the University of California, San Diego, who was not a part of the research teams. “But I’d say it’s a turning point. We now have a reliable way forward, and I think it’s fair to expect that we will find 20, 30, maybe more such mutations in the next year or two.”
Other researchers were more cautious, saying that the genetics of rare mutations was not yet well enough understood to make conclusive statements about their effect on the behavior of specific genes.
“This is a great beginning, and I’m impressed with the work, but we don’t know the cause of these rare mutations, or even their levels in the general population,” said Aravinda Chakravarti of the Institute of Genetic Medicine at the Johns Hopkins University Medical School, who was not involved in the studies. “I’m not saying it’s not worth it to follow up these findings, but I am saying it’s going to be a hard slog.”
The three research teams took a similar approach, analyzing genetic material taken from blood samples of families in which parents who have no signs of autism give birth to a child who develops the disorder. This approach gives scientists the opportunity to spot the initial mutations that accompany the condition, rather than trying to work though possible genetic contributions from maternal and paternal lines. In all three studies, the researchers focused on rare genetic glitches called de novo mutations.
De novo mutations are not inherited but occur spontaneously near or during conception. Most people have at least one, and the majority of them are harmless.
In one of the new studies, Dr. Matthew W. State, a professor of genetics and child psychiatry at Yale, led a team that looked for de novo mutations in 200 people who had been given an autism diagnosis, as well as in parents and siblings who showed no signs of the disorder. The team found that two unrelated children with autism in the study had de novo mutations in the same gene — and nothing similar in those without a diagnosis.
“That is like throwing a dart at a dart board with 21,000 spots and hitting the same one twice,” Dr. State said. “The chances that this gene is related to autism risk is something like 99.9999 percent.”
The team found that a third child had a de novo mutation in another gene suspected of a possible link to autism risk — but one such mutation is not enough to make the case.
Next Page »

A version of this article appeared in print on April 5, 2012, on page A1 of the New York edition with the headline: Scientists Link Gene Mutation To Autism Risk.