Tuesday, October 18, 2011
The Centers for Disease Control and Prevention welcomes the announcement today that results from the clinical trial in Africa of a malaria vaccine candidate show it prevented about half of malaria cases, including the most severe, in young children.

The RTS,S/AS01 study results, published in the New England Journal of Medicine, are a promising advance in development of a malaria vaccine for African children, which, if successful, could save hundreds of thousands of lives. In 2009, malaria caused the deaths of nearly 800,000 people; approximately 90 percent were children in Africa.

Children ages 5-17 months were enrolled in the trial at 11 sites in seven African countries. The children who received the vaccine had approximately half the number of clinical and severe malaria cases than children in the comparison group, which received other vaccines, either rabies or meningococcal. CDC, in collaboration with the Kenya Medical Research Institute, led the trial at one site in western Kenya.

Still to come are analyses of how well the RTS,S/AS01 vaccine works in young infants (aged 6-12 weeks) when provided with their routine childhood immunizations, and how long the vaccine is protective. Those data, expected in 2012 and 2014, respectively, will be critical to understanding how the vaccine may be used to control malaria. 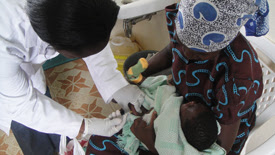 It's important to note that the vaccine provided this protection in settings where there is ongoing use of other effective malaria prevention and treatment interventions: bed nets, antimalarial drugs, indoor residual insecticide spraying to prevent mosquito-borne transmission, and drugs to protect pregnant women and their fetuses from malaria's adverse effects. Thanks to sharp increases in global funding for malaria during the past decade, many African countries have been able to scale up the distribution and use of these safe, effective, and affordable life-saving interventions. As a result, many countries have seen decreases of up to 50 percent in deaths of children younger than 5 years (PMI Fifth Annual Report, April 2011

).
The Roll Back Malaria Partnership

, which includes CDC, is working to achieve near zero preventable malaria deaths. These promising vaccine trial results add to the hope that adding an effective vaccine to current malaria interventions will move us closer to that goal.