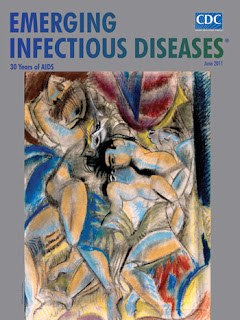 
Suggested citation for this article

The book starts with a discussion of pandemic (H1N1) 2009 virus in Australia. In the state of Victoria, a major effort was made to limit the spread of the infection but had little success. Ultimately, 15%–20% of the Victorian population showed evidence of infection, despite a reproduction number computed as ≈1.6. The chapter on Buruli ulcer describes some findings from recent work in Australia on the disease. There is a discussion of a small new epidemic focus where evidence suggests mosquito-borne transmission, including genetic material identified from mosquitoes and evidence of protection from the use of mosquito repellent.

Infections of some special populations are discussed. It struck me that pneumonia and urinary tract infections in residents of long-term care are hardly emerging infections. However, the chapter rightly focuses on demographic shifts and changing effects of antimicrobial drugs. Another group mentioned is mobile populations. The authors discuss hepatitis E that is associated with refugee camps, but it might have been helpful to also emphasize that the risk of communicable diseases in these settings is primarily of outbreaks of diseases of the urban poor. The One Health concept is itself an emerging idea, resting on the interdependence of human and animal health and the implications for disease control.

Overall, this is a worthwhile book. It is not comprehensive but aims to update readers on specific areas in infectious diseases. The text does this quite well, but it has a heavy microbiological and clinical focus, and the public health aspects of the topics could, in general, be expanded. For the reader with an interest in the chapter topics, it is worth perusing.


Comments to the Authors
Please use the form below to submit correspondence to the authors or contact them at the following address: