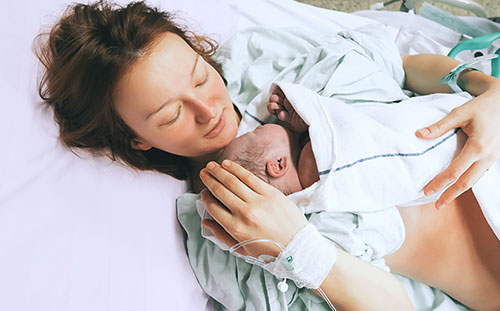 The two best ways to prevent group B strep (GBS) disease during the first week of a newborn’s life are:
Unfortunately, experts have not identified effective ways to prevent GBS disease in people older than one week old.
On This Page

Most babies born to women who tested positive for GBS bacteria do not need treatment if their mother received antibiotics during labor.
The American College of Obstetricians and Gynecologists (ACOG) and American College of Nurse-Midwives (ACNM) recommend women get tested for GBS bacteria when they are 36 through 37 weeks pregnant. The test is simple and does not hurt. Clinicians use a sterile swab (“Q-tip”) to collect a sample from the vagina and the rectum. They send the sample to a laboratory for testing.
Women who test positive for GBS are not sick. However, they are at increased risk for passing the bacteria to their babies during birth.
GBS bacteria come and go naturally in people’s bodies. A woman may test positive for the bacteria at some times and not others. That is why doctors test women late in their pregnancy, close to the time of delivery.
Publicado por salud equitativa en 12:23