By Sally Robertson, B.Sc.Jul 15 2019Reviewed by Kate Anderton, B.Sc. (Editor)
As the 5G mobile network launches in some UK cities, experts discuss whether there is any reliable evidence to suggest people should be worried about the new technology. 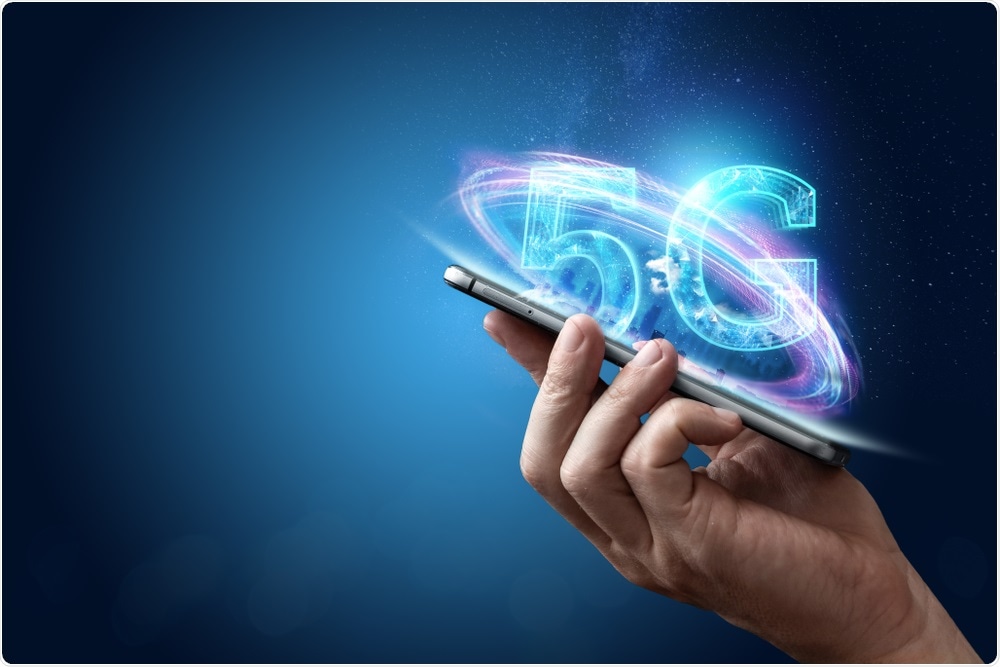 Marko Aliaksandr | Shutterstock
5G promises to provide lightning-fast speeds and a ten-fold improvement in network performance.
The last major upgrade to cellular technology was 4G, which was introduced in 2009 and offered peak speeds of around 10 Mbps. By contrast, 5G promises speeds of between 10 and 20 Gbps and network latency is expected to fall from 30ms to around 1ms, which would be ideal for streaming video games and watching videos online.
Mobile phone users across the world are eager to access this fifth generation of cellular technology and phone manufacturers are ready to deploy it. President Donald Trump is adamant that the United States does not fall behind other countries such as China in rolling out the network, but not everybody agrees that Trump should be pushing ahead.
Underlying all of the potential benefits are concerns about the risks the new technology can pose to human health.

Why are people worried?

5G has been hyped for a few years, but many posts on Facebook or alternative health websites claim that the technology is one packed with higher radiation than traditional cellular technology and could potentially be damaging to human health.
Some experts warn that the network would deliver radiofrequency radiation that could mutate DNA, cause oxidative damage and disrupt cell metabolism, all of which could lead to disease.
As with previous 3G and 4G technologies, the 5G network relies on radio wave signals transmitted between phones and masts.
Electromagnetic radiation already surrounds us, whether it be from technologies such as mobile phones, televisions and radios or from natural sources such as the sun.
However, at the root of concerns surrounding 5G is that it uses higher frequency radio waves than previous mobile networks. The higher frequency waves travel through space over much shorter distances, which means more transmitter masts closer to ground level are needed, compared with earlier technologies.
All cell phone technologies rely on radiofrequency radiation (RFR), which refers to any wave emitted from the electromagnetic spectrum such as microwaves, X-rays, radio waves or light from a computer monitor or the sun. It is clear that RFR does not pose a health threat, but the problem arises when people speculate about how it could become dangerous.
Experts say the key factor in whether RFR becomes dangerous is whether it is classified as ionizing or non-ionizing. Any radiation that is non-ionizing is not strong enough to break chemical bonds and cause DNA damage. All lower frequencies such as ultraviolet, infrared, visible light and radio waves fall into the non-ionizing category, with only frequencies that are above ultraviolet such as X-rays and gamma rays classifying as ionizing.

Neurology expert Steven Novella from Yale University says it is simply the word “radiation” that people generally get concerned about:

Using the term radiation is misleading because people think of nuclear weapons—they think of ionizing radiation that absolutely can cause damage. It can kill cells. It can cause DNA mutations.”
Steven Novella, MD

However, non-ionizing radiation does not damage DNA or tissue, so most people’s concerns are unnecessary, he adds: “There’s no known mechanism for most forms of non-ionizing radiation to even have a biological effect.”
Extended exposure to higher frequencies in the electromagnetic spectrum that are well beyond those used by mobile phones do, of course, pose health risks such as the sun’s UV rays, which can cause skin cancer. The use of even higher radiation levels such as medical X-rays and gamma rays is also strictly controlled so that any damaging effects to the body are avoided.

People are understandably concerned over whether they might elevate their risk of cancer, but it's crucial to note that radio waves are far less energetic than even the visible light we experience every day. There is no reputable evidence that mobile phones or wireless networks have caused us health problems."
David Grimes, Physicist and Cancer Researcher, The University of Oxford.

Are the transmitter masts a problem?

5G networks do require a lot more transmitter masts to send and receive mobile phone signals, but the increased number of masts would mean each one could run on less power than with 4G technology, meaning the level of exposure to radiation from 5G masts would actually be lower.

Does heating pose a threat?

One frequency within the 5G spectrum that is permitted is the microwave band which generates heat in objects it passes through.
However, at the levels 5G uses, this heating effect does not cause any damage, says Rodney Croft, adviser to the International Commission on Non-Ionizing Radiation Protection: "The maximum radio frequency level that someone in the community could be exposed to from 5G (or any other signals in general community areas) is so small that no temperature rise has been observed to date."

What does the phone industry say?

The phone industry also maintains that 5G technology does not cause any damaging health effects.
"Radiofrequency energy from wireless devices and networks, including 5G, hasn't been shown to cause health problems, according to the consensus of the international scientific community," states the wireless industry association CTIA.
For now, the evidence base about the health risk of 5G suggests that there is no reason to be concerned about the new technology; the other technologies surrounding people every day are associated with significantly higher and measurable risks.

With 5G, the hazard is low—but non-zero—and the actual risk appears to be zero.”
Steven Novella, MD