By Lois Zoppi, BA
Prostate cancer is one of the leading causes of death globally. It only affects men, and the risk of developing prostate cancer increases with age. 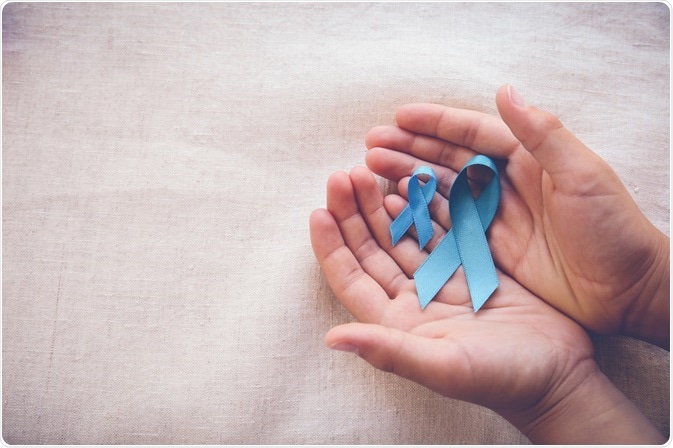 Image Credit: SewCream / Shutterstock
Prostate cancer is one of the leading causes of death due to cancer, and is the most diagnosed non-skin cancer in the United States. Its incidence in developing countries is also increasing. In 2012, an estimated 1.1 million men worldwide were diagnosed with prostate cancer.

Men who have a family history of prostate cancer are advised to be screened for prostate cancer at around 40 years of age, as their risk of developing the disease significantly increases, especially if the affected family member is a brother.
Diet and lifestyle
Studies have also shown a link between increased alcohol intake, smoking and prostate cancer prevalence, but a direct link is yet to be made.
Increased consumption of fruit and vegetables including pomegranate juice, tomatoes, soy beans, legumes, and cruciferous vegetables like broccoli has been shown to be beneficial in decreasing the incidence of prostate cancer. High calcium intake may slightly increase the risk of prostate cancer.
There have been links between excessive use of micronutrients and supplements and prostate cancer, although the reason why micronutrient intake affects prostate cancer is unclear.
Sexual activity and sexually transmitted diseases
Some studies have shown that ejaculation frequency can prevent the development of prostate cancer. A 2014 study showed that men who ejaculated more than five times per week, had a lower risk of developing prostate cancer.
Other studies showed similar results with increased number of ejaculations (21 times per week). It is not yet understood why increased ejaculation has a protective effect on the incidence of prostate cancer.
However, increased sexual activity is also linked with higher chances of contracting sexually transmitted diseases (STDs) such as gonorrhoea and human papillomavirus (HPV).

Incidence rates of prostate cancer are high in Western and Northern Europe, Northern America, Australia, and New Zealand as prostate specific antigen testing (PSA) is common in these areas. The Caribbean and South Africa also see high incidence rates (79.8%, 61.8%, and 60.1% respectively), while rates in Asian populations remain low at 10.5% and 4.5% for Eastern and South-Central Asia, respectively.
Mortality rates see less variation worldwide. Rates are high in mainly black populations such as in the Caribbean and sub-Saharan Africa, but are very low in Asia.

In many cases, prostate cancer is slow-growing and non-invasive. The American Cancer Society has estimated that 91% of patients have a 10-year survival rate. In developing countries, the survival rate is lower due to delayed diagnosis, restricted health care access, and inadequate treatment.
Overall, more research needs to be conducted to solidify links seen between the incidence of prostate cancer, diet and vitamin intake, and sexual activity. There are clear links between age and prostate cancer incidence.
Global incidence and mortality rates vary widely due to an imbalance in the available preventative and diagnostic services among the countries. Incidence rates are significantly higher in Australia/New Zealand, Northern American and Northern and Western Europe than in Asia.
Reviewed by HH Patel, M.Pharm