By Lois Zoppi, BA
Even though patients can present clear bone scans at the time of diagnosis, it is believed that up to 60% of patients with early-stage cancer have circulating tumor cells. However, the presence of these cells may not always result in the development of additional tumors. 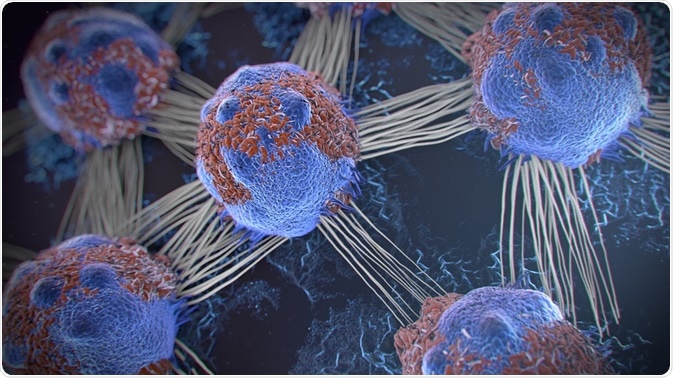 What is prostate cancer?

Prostate cancer develops in the gland responsible for producing semen, and only affects men. In a large number of cases, men do not exhibit symptoms from slow-growing prostate cancer. However, in fast-growing cancers, men may show urinary symptoms such as frequent urination and difficulty urinating.
Men with prostate cancer may also experience pain in the bottom of the back or pelvic area if the cancer has spread from the prostate to the bones in the surrounding area. These symptoms are not exclusive to prostate cancer, and are present in a number of less serious diseases. Older men are more commonly affected by prostate cancer.

What is cell dormancy?

Metastasis (sometimes called ‘metastatic cancer’ or ‘stage four cancer’) is the leading cause of death among cancer patients as it leads to organ failures. Metastasis occurs when cancer cells called circulating tumor cells (CTCs) separate from the main tumor, and travel to other parts of the body, causing new tumors to grow in other parts of the body.
CTCs do not necessarily find a suitable environment to grow and metastasize. Conversely, disseminated tumor cells (DTCs) are found in environments where metastases can occur.
Metastatic cells can remain dormant in the patients showing no sign of disease for years, and therefore the cancer can go undetected and untreated. In prostate cancer, while patients can experience recurrence more than five years after the primary tumor is removed, oftendue to dormant cells travelling to the bone.
Dormant cells can be tracked by using fluorescent dyes which can remain visible after several cell divisions. Such dyed cells have been injected into mice for studying the nature of metastasis, however certain dyes have high toxicity and they lose fluorescence after seven or eight cell divisions.

The definition of tumor cell dormancy can differ greatly, but three categories have been identified.
All of these categories indicate the possible reasons why the disease recurs after a number of years. Each category would require a different treatment plan to prevent progression due to dormancy as they are all present in distinctly different biological scenarios.

There are numerous theories about why prostate cancer cells are reactivated but the exact cause and effect are yet to be unanimously concluded.
Epithelial-mesenchymal transition (EMT) is a normal developmental process through which a polarized epithelial cell goes through a number of biochemical alterations consequently causing the cell to assume a mesenchymal cell phenotype.
Mesenchymal cells typically possess increased resistance to apoptosis, enhanced invasiveness and migratory abilities and can be more resistant to chemotherapeutics.
As such, EMT has been shown to play a part in enabling metastasis, while mesenchymal to epithelial transition (MET) is thought to complete the progression, with EMT being primarily associated with metastases in secondary sites in the body, and MET linked to increased motility and invasion. It is currently unclear whether MET is the cause or the effect of cell proliferation.
Cell dormancy has also been studied using cell lines. In mouse xenograft models, when the prostate cancer cell lines PC3 were injected into the tibia, treatment with bone morphogenetic protein BMP7 inhibited the development of bone tumors.

A deeper understanding of CTCs and DTCs will lead to a greater ability to detect, treat, and ultimately avoid metastasis reactivation. Results of CTC detection vary greatly due to differing detection methods, variability in patient demographics, and limits of current technologies; so inaccuracies can be present when counting CTCs in patients before and after cancer treatment.
More research needs to be done to determine the precise event catalyzing the shift from cell dormancy to reactivation, especially considering the EMT and MET.
Reviewed by HH Patel, M.Pharm