NIAID Responds to Ebola Outbreak in the Democratic Republic of the Congo | NIH: National Institute of Allergy and Infectious Diseases

NIAID Responds to Ebola Outbreak in the Democratic Republic of the Congo | NIH: National Institute of Allergy and Infectious Diseases

On May 8, 2018, the Democratic Republic of the Congo (DRC) reported an outbreak of Ebola virus disease—a serious and often fatal illness—in Équateur Province in the northwest part of the country. As the U.S. government’s lead agency on biomedical infectious disease research, NIAID is providing several layers of support to the DRC and World Health Organization, which are leading a global, multi-sectoral response to the outbreak.
Ebola virus was first discovered in 1976 in the DRC (known then as Zaire) and has caused periodic outbreaks in the country since, most recently in May 2017. As of June 18, 2018, health officials had reported 38 confirmed and 14 probable Ebola cases and 28 deaths in the current outbreak, the country’s ninth in the past four decades. The largest outbreak of Ebola occurred in 2014-2016 in West Africa—a region with no recognized prior Ebola outbreaks—and caused more than 28,600 infections and more than 11,300 deaths, according to the World Health Organization (WHO).
The response to the current outbreak of the DRC Ministry of Health and Population and the WHO is grounded in proven public health strategies for containing Ebola virus disease, including community engagement, case identification and management, infection control, contact tracing, and safe and dignified burials. As part of a coordinated research response, the DRC also is deploying experimental vaccines and treatments—many of which were evaluated in clinical trials by NIAID and others in the outbreak in West Africa and have some human evidence of safety and/or efficacy.
NIAID and the WHO signed a memorandum of understanding on April 13, 2018, to plan and implement the research response to the current outbreak in the DRC. NIAID is advising on clinical trial design and has provided materials on social mobilization, communication and community engagement from its prior clinical trial protocol of Ebola vaccines in West Africa (PREVAIL 1), which included evaluation of the rVSV-ZEBOV vaccine. Clinicians in the DRC are administering the experimental rVSV-ZEBOV vaccine as part of a ring vaccination campaign in which contacts of confirmed cases, contacts of contacts, and those at occupational risk of infection are offered vaccination under informed consent. NIAID has shared partial two-year immunogenicity data on the vaccine from PREVAIL 1 and continues to gather additional data in a large, ongoing clinical trial in West Africa of multiple experimental vaccine candidates.
In the United States, any clinicians or laboratory workers at risk of occupational exposure to Ebola virus, including those travelling to the DRC, can receive the rVSV-ZEBOV vaccine through NIAID’s PREPARE clinical trial protocol.(link is external)
NIAID also is supporting the deployment of experimental therapeutics. For example, NIAID and its PREVAIL partners previously evaluated the safety and efficacy of ZMapp in a randomized controlled trial in the midst of the West Africa outbreak. NIAID has provided these data, along with the trial protocol and supporting materials, to the WHO and the DRC. In addition, at the request of the DRC Minister of Health and in coordination with the WHO, NIAID has shipped treatment regimens of another experimental therapeutic, mAb114, to the National Institute of Biomedical Research (INRB) in Kinshasa, the lead research coordination group for the Ebola outbreak as designated by the Ministry of Health. NIAID researchers, in collaboration with the INRB and the Institute for Research in Biomedicine(link is external) and Humabs BioMed SA(link is external) (both based in Bellinzona, Switzerland) isolated the monoclonal antibody from a human survivor of the 1995 Ebola outbreak in Kikwit, a city in the DRC. After promising studies in nonhuman primates, NIAID, with support from the U.S. Defense Advanced Research Projects Agency (DARPA), recently launched a first-in-human trial evaluating mAb114 at the National Institutes of Health Clinical Center in Bethesda, Maryland. NIAID anticipates implementation of an mAb114 treatment protocol in the DRC with precise design to be determined. NIAID staff have deployed to assist with teaching DRC colleagues how to administer mAb114.
NIAID also is providing technical assistance and laboratory support on advanced diagnostic techniques to the INRB and Congo-Brazzaville (The Republic of the Congo). Scientists from NIAID’s Rocky Mountain Laboratories based in Hamilton, Montana, are building capacity for advanced Ebola diagnostics (PCR and Sanger and next-generation sequencing) and training National Laboratory staff on biosafety and biosecurity best practices. The effort in Congo-Brazzaville builds on nearly a decade of collaboration, and the National Public Health Lab recently reported that it can now run Ebola virus diagnostics thanks to NIAID’s efforts. These experts also are assisting Congo-Brazzaville in setting up Ebola surveillance studies around Lake Tele.
NIAID scientists and NIAID-supported institutions continue to develop and test better diagnostics, vaccines, and treatments against Ebola, and are working to better understand how the virus causes disease. NIAID also is studying the long-term health consequences facing Ebola survivors, including viral persistence in semen, eye issues(link is external) and neurological complications.
Taken together, these efforts promise to help mitigate the current Ebola outbreak and outbreaks that will inevitably emerge in the future.
To see NIAID Ebola research and electron micrograph images of the Ebola virus, check out NIAID’s album of downloadable, high-resolution photos(link is external). 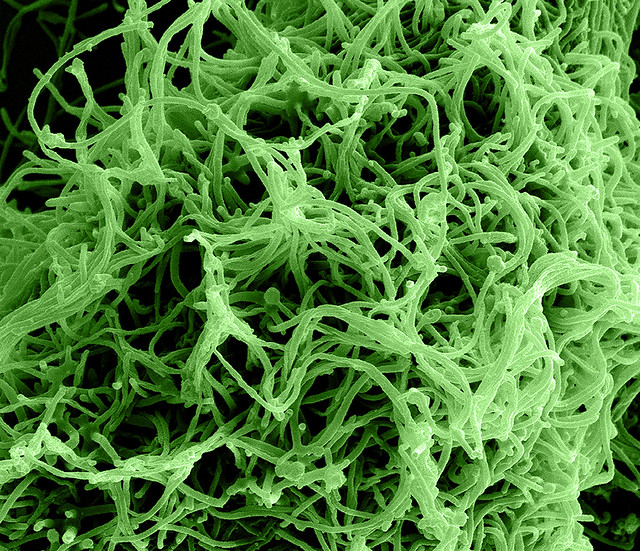