World TB Day is observed every year on March 24. Learn how CDC is working for a TB free world.
World TB Day commemorates the date in 1882 when Dr. Robert Koch announced his discovery of Mycobacterium tuberculosis, the bacteria that causes TB. This year’s World TB Day theme “Wanted: Leaders for a TB-Free World. We can make history. End TB” highlights the importance of engaging and empowering leaders in public health, government, medicine, and communities in efforts to eliminate TB.
TB is preventable and curable, yet it remains the world’s leading infectious disease killer. TB affects millions around the world; in every state; in rural areas and cities; in schools, workplaces, homes; and in many other places where people are in close contact. Drug-resistance continues to threaten our ability to treat and control TB disease. Better diagnostics, shorter treatment regimens, and strong partnerships domestic and globally are needed to accelerate the path to elimination. Learn what CDC is doing in the United States and around the world to eliminate this devastating disease. 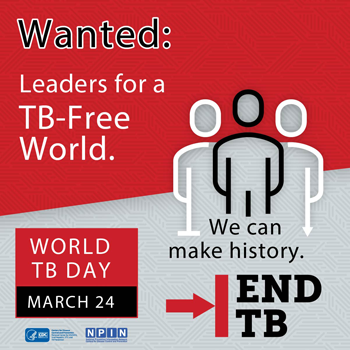 A CDC airborne infection control engineer checks a biosafety cabinet to demonstrate TB infection control knowledge and skills – June, 2017
Providing funding and technical assistance to state and local TB control programs.
Clinicians, health care agencies, and community organizations, especially those serving at-risk populations, have a critical role in TB elimination. Many of those at high risk for latent TB infection do not traditionally receive care in health departments — but are seen by private community providers and community health centers. Engaging these partners is critical to future success.

CDC is working to find, cure, and prevent TB around the world

At CDC we are helping to drive global progress against TB by bringing to bear a combination of scientific expertise and on-the-ground experience diagnosing, curing, and preventing TB worldwide. We’re on the frontlines in more than 25 high-burden countries working with partner governments and helping sustain country efforts.
Today, we stand at a critical juncture in find, curing, and preventing TB globally. As a global leader in the fight to end TB, CDC is uniquely poised to change the trajectories on future TB incidence and mortality – identifying missing TB cases, confronting drug-resistant tuberculosis, and addressing HIV and TB co-infection which is critical to ending the TB epidemic. CDC brings a distinctive combination of strong scientific and technical expertise, strong peer-to-peer relationships with Ministries of Health, and the strategic use of data to increase impact and effectiveness, as well as possessing exceptional global and domestic reach and impact. 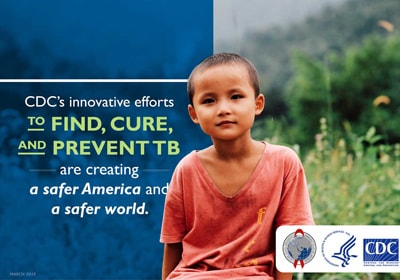 Fighting TB at home and abroad: As part of a World TB Day campaign, this social media card reminds stakeholders that “TB anywhere is TB everywhere” using the hashtag campaign #CDCFightsTB.
We possess the tools and innovative strategies to tackle this public health challenge.
As a global community we have made tremendous progress. Global efforts have saved more than saved 50 million lives between 2000 and 2016. And while TB extracts a severe economic toll, efforts to end TB are one of the best public health investments made – for every dollar spent on TB there is a resulting economic benefit of $43.
Despite this progress, TB remains the world’s top infectious disease killer. Ending TB will require a sustained global commitment.
We can and must do more. In September, CDC will join world leaders, advocates, and funders at the first-ever UN High Level Meeting on TB. The UN meeting represents a unique opportunity to build greater urgency and innovation into the fight against the deadly TB epidemic.
Until TB is eliminated, World TB Day will not be a celebration. However, it is a valuable opportunity to educate the public about the devastation of TB disease and how we can work together to prevent it. CDC remains committed to confining TB to the pages of history in the United States and around the world.
For more information on CDC’s TB activities in the U.S. click here. For more information on CDC’s global TB activities click here.