In support of improving patient care, this activity has been planned and implemented by Medscape, LLC and Emerging Infectious Diseases. Medscape, LLC is jointly accredited by the Accreditation Council for Continuing Medical Education (ACCME), the Accreditation Council for Pharmacy Education (ACPE), and the American Nurses Credentialing Center (ANCC), to provide continuing education for the healthcare team.
Medscape, LLC designates this Journal-based CME activity for a maximum of 1.00 AMA PRA Category 1 Credit(s)™. Physicians should claim only the credit commensurate with the extent of their participation in the activity.
All other clinicians completing this activity will be issued a certificate of participation. To participate in this journal CME activity: (1) review the learning objectives and author disclosures; (2) study the education content; (3) take the post-test with a 75% minimum passing score and complete the evaluation at http://www.medscape.org/journal/eid; and (4) view/print certificate.
Release date: March 16, 2018; Expiration date: March 16, 2019

We conducted a yearlong prospective study of febrile patients admitted to a tertiary referral hospital in Chittagong, Bangladesh, to assess the proportion of patients with rickettsial illnesses and identify the causative pathogens, strain genotypes, and associated seasonality patterns. We diagnosed scrub typhus in 16.8% (70/416) and murine typhus in 5.8% (24/416) of patients; 2 patients had infections attributable to undifferentiated Rickettsia spp. and 2 had DNA sequence–confirmed R. felis infection. Orientia tsutsugamushi genotypes included Karp, Gilliam, Kato, and TA763-like strains, with a prominence of Karp-like strains. Scrub typhus admissions peaked in a biphasic pattern before and after the rainy season, whereas murine typhus more frequently occurred before the rainy season. Death occurred in 4% (18/416) of cases; case-fatality rates were 4% each for scrub typhus (3/70) and murine typhus (1/28). Overall, 23.1% (96/416) of patients had evidence of treatable rickettsial illnesses, providing important evidence toward optimizing empirical treatment strategies.
The prevalence, seasonality, and genotypes of tropical rickettsial illnesses in Bangladesh remain unknown. Scrub and murine typhus typically present as undifferentiated febrile illnesses and are insensitive to penicillins and cephalosporins, common antimicrobial drugs used empirically (1). Rickettsial illnesses are increasingly recognized as important causes of fever in adjacent countries in the region, including Thailand, Laos, and India (2–5). Therefore, determining whether rickettsial infections are widespread in Bangladesh, a low-income country with a population of ≈160 million, is of urgent public health interest.
Cross-sectional seroprevalence studies suggest that exposure to scrub typhus and murine typhus is common (6). In addition, given the substantial proportion of febrile patients from north-central Bangladesh with confirmed R. felis infection (7), further investigations regarding the clinical relevance of this pathogen are warranted.
Identification and characterization of circulating pathogens and strains is crucial for the development of diagnostics and vaccines (8). Strong seasonal trends might guide differential diagnostic considerations. Therefore, we conducted a year-long prospective study of febrile patients admitted to a tertiary referral hospital with a wide catchment area in southeast Bangladesh, aiming to assess the proportion of patients with rickettsial illnesses, identify the causative pathogens, strain genotypes, and the associated seasonality patterns.

We conducted our study at Chittagong Medical College Hospital (CMCH), Chittagong, Bangladesh, during August 2014–September 2015. We enrolled into the study all consenting patients >12 years old who were admitted with a febrile illness to the medical wards and referred to the hospital’s malaria screening service with a history of fever for <3 weeks. Written informed consent was provided by all patients before inclusion in the study or by their relatives if the patient lacked capacity for providing consent. The study was approved by Chittagong Medical College ethics committee in Bangladesh and the Oxford Tropical Research Ethics Committee, United Kingdom.
We collected admission blood samples and convalescent-phase blood samples (taken 7–14 days apart, where possible) into EDTA tubes and separated the samples into packed cells and plasma before storage at −30°C. We subjected packed cell admission samples of all patients to DNA extraction for real-time PCR screening by using the 47-kDa htra gene–based assay for Orientia spp. and the 17-kDa gene–based assay for Rickettsia spp. We subsequently confirmed positive results by nested PCR (nPCR) assays with product sequencing. For Orientia spp., we targeted the 56-kDa and 47-kDa gene targets. For Rickettsia spp., we targeted 17-kDa and performed ompB real-time PCR and gltA nPCR, as previously described (9,10).
We aligned the resulting DNA sequences for construction of phylogenetic trees by using CLC Sequence Viewer 7.0.2 (http://www.clcbio.com). For serologic testing, all patient plasma samples underwent indirect immunofluorescence assays (IFA) by using slides from the Australian Rickettsial Reference Laboratory coated with O. tsutsugamushi (strains Karp, Kato, and Gilliam) for scrub typhus or R. typhi (Wilmington strain) for murine typhus. We used the following stringent diagnostic positivity criteria for scrub and murine typhus: a baseline IgM titer of >3,200 or a 4-fold rise to >3,200. In the absence of regional serologic positivity criteria for Bangladesh, we selected these cutoffs on the basis of experience from an area where scrub typhus is highly endemic (11). In suspected cases of R. felis infection, we conducted IFA by using dedicated IFA slides from the Australian Rickettsial Reference Laboratory. We conducted statistical analyses by using Stata 14 (StataCorp LLC, College Station, TX, USA).
Top

We screened 901 patients for enrollment; 794 patients met the enrollment criteria and, of these, 416 gave consent and were enrolled into the study. A total of 414 patient admission samples were available for PCR and 415 for serologic testing; 256/416 (62%) patients were followed up to provide paired samples. Of the enrolled patients, 16.8% (70/416) had a robust diagnosis of scrub typhus and 5.8% (24/416) of murine typhus by PCR, serologic testing, or both (Table). Two patients had evidence of both typhus group and scrub typhus infection, and 2 patients were found to have undifferentiated Rickettsia spp. infections. Samples from 2 patients were positive for R. felis (1 patient’s blood was positive for R. felis by 17kDa nPCR and sequencing; the second patient was positive for O. tsutsugamushi by 47kDa and 56kDa nPCR and 56kDa gene sequencing from blood and eschar, but also had a superficial eschar swab positive for R. felis by 17kDa nPCR and sequencing, suggestive of scrub typhus infection with possible skin carriage of R. felis on the skin or eschar). Both of these patients with PCR evidence of R. felis infection were serologically negative (titer <1:10) by R. felis–specific IFA. In this prospective cohort of hospitalized febrile patients, 23.1% (96/416) of the fevers were attributable to rickettsial illnesses.

Figure 1. Geographic distribution of scrub typhus (A) and murine typhus (B) cases, Chittagong, Bangladesh, August 2014–September 2015. Inset shows location of enlarged area (red box).
We plotted the geographic distribution of scrub typhus and murine typhus cases (Figure 1), reflecting the catchment area of the hospital in southeast Bangladesh. The case-patient with blood PCR positivity for R. felis was from urban Chittagong, whereas the case-patient with eschar swab positivity for R. felis and blood positivity for O. tsutsugamushi came from a rural area. Only 12% (8/67) of patients with scrub typhus came from urban areas, compared with 27% (84/310) of those without evidence of rickettsia (p = 0.009).

Figure 2. Seasonality of scrub typhus and murine typhus–related hospital admissions, Chittagong Medical College Hospital, Chittagong, Bangladesh, August 2014–September 2015. We observed a biphasic pattern in scrub typhus, with an increase of cases...
We observed 2 peaks of scrub typhus patient admissions during the study period, 1 in the cooler months of November and December, when 32/72 (44%) patients were found to be positive for scrub typhus, and the other before the rainy season in April and May, with 6/34 (18%) of cases. Murine typhus cases peaked in the months before the rainy season (Figure 2).
Among all patients with rickettsial illnesses, the most common complaints were headache, anorexia, and myalgia, whereas rash was only detected in 6/96 (6%) of patients. In scrub typhus cases, an eschar was found in only 3/70 (4%) of patients, despite training and use of a dedicated checklist for identifying eschars included in the clinical record form. The blood PCR–positive R. felis case (SW148) had a different manifestation than other rickettsioses: an itchy vesicular–petechial rash similar to spotted fever group rickettsioses that started periorally and distributed to the trunk and extremities. The patient reported contact with rats in the 3 weeks before illness onset. Overall, 4 deaths were attributable to typhus during this study (3/70 [4.3%] of the patients with scrub typhus and 1/28 [3.6%] patient in the murine typhus group). Of the rickettsia-negative case-patients, 14/320 (4.4%) died. All 3 of the patients with scrub typhus who died had clinical evidence of meningoencephalitis. At study enrollment, the first patient had a Glasgow Coma Scale of 7, severe respiratory distress, new atrial fibrillation with a rapid ventricular response, and hypotension with cold peripheries, consistent with septic shock. The second patient had impaired consciousness, meningism, dyspnea, chest pain, and cough. The third patient had a Glasgow Coma Scale of 12, with convulsions and a cough with severe respiratory distress. The patient with murine typhus who died had severe diarrhea, progressive impairment of consciousness, and renal failure. 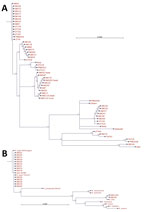 We are grateful to the patients for their participation in this study.
This study was funded by the Wellcome Trust, London, UK. Wellcome Trust had no role in study design; in the collection, analysis, and interpretation of data; in the writing of the report; or in the decision to submit the paper for publication.
Top