“[At the NHLBI,] we’re encouraged to take on risky projects. Doing research for years, we finally get a breakthrough. It’s just like standing on top of a tall mountain. There’s nothing like that.” - Hong Xu, Ph.D., Orloff Award Winner, 2015
The NHLBI Orloff Science Awards are named in honor of Dr. Jack Orloff, a longtime member of the NHLBI intramural family and scientific director from 1974 to 1988. The awards were initiated in 2011 to recognize achievements in science or scientific groundwork where clear results were seen during the previous calendar year.
The award emphasizes the teamwork within the Division of Intramural Research. This Division’s research is broad and includes investigations into the basic principles of molecular, cellular, and organ-level biology and their relationship to diseases. The Orloff winners are scientists, clinicians, and other individuals who contributed substantively to work in their respective fields, helping to make advances toward healing various diseases. The winners are selected by the NHLBI director and scientific director. 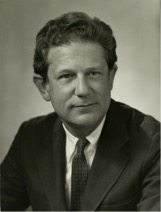