By Sally Robertson, BSc
Glucose serves as a major source of energy for metabolic processes in mammalian cells. Since polar molecules cannot be transported across the plasma membrane, carrier proteins called glucose transporters are needed for cellular uptake. 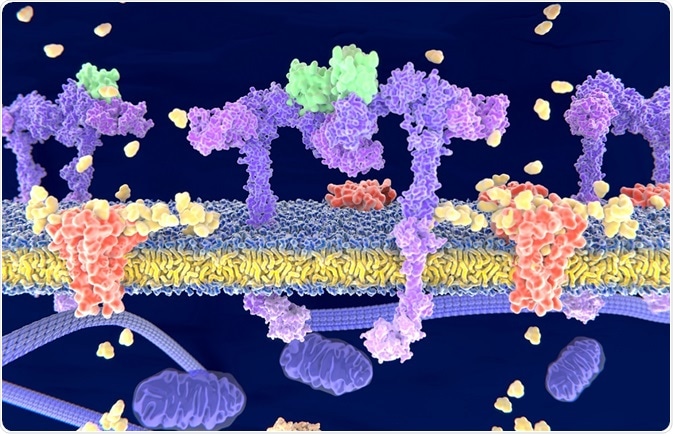 Credit: Juan Gaertner/Shutterstock.com
Glucose transporters are found in the plasma membrane where they bind to glucose and enable its transport across the lipid bilayer. They can be divided into two classes: the sodium-glucose cotransporters or symporters (SGLTs) and the facilitative glucose transporters (GLUTs).

SGLTs are expressed by cells in the small intestine and in the renal proximal tubules. These proteins mediate the active transport of glucose against an electrochemical gradient. Glucose in the intestinal lumen or the nephrons is transported against its concentration gradient by another transport mechanism, where glucose uptake is coupled with the uptake of sodium ions that are also being transported down their concentration gradient.
The human SGLT family is made up of twelve members involved in the transport of glucose, anions, fatty acids and vitamins. Two of the main members responsible for glucose transport are SGLT1 and SGLT2.
SGLT1 is a 664-amino acid protein serving as the primary transporter of glucose in the intestine. SGLT2 is located in cells that line the proximal tubule, where it aids reabsorption of glucose from renal fluid, to prevent glucose being eliminated in the urine.

The second group of glucose transporters, the GLUT family, is made up of 14 members. These are responsible for the bidirectional transport of glucose in tissues and cells. This involvesusing facilitative diffusion to carry glucose down a concentration gradient, into the cell.
These proteins have one substrate binding site exposed to the inside of the cell and another exposed to the outside. Binding of glucose to one site induces a conformational change that results in glucose being transported from one side of the membrane to the other.

The GLUT family is divided into three subgroups. The first includes GLUT1 to GLUT 4. GLUT1 is highly abundant in fetal tissue and in adults, it is most highly expressed in red blood cells and in barrier tissues such as the blood brain−barrier. In all cells, it also enables the uptake of glucose that is required for respiration.
GLUT2 is found in cells in the kidney tubule, pancreas, liver and small intestine. In liver cells, it facilitates glucose uptake for glycolysis and the release of glucose generated by gluconeogenesis. In the pancreas, bidirectional transport of glucose by GLUT2 enables the intracellular environment of the beta cells to determine glucose levels in the blood serum.
GLUT3 is mostly found in nerve cells, where it is thought to be responsible for the majority of glucose transport. It is also found in the placenta. GLUT 4 is expressed in adipose tissue, cardiac muscle and skeletal muscle.
Most of the transporter proteins that are members of class II and class III GLUT have only recently been identified by genome sequencing projects and by Expressed Sequence Tag (EST) database searches and their function is not yet clearly understood.