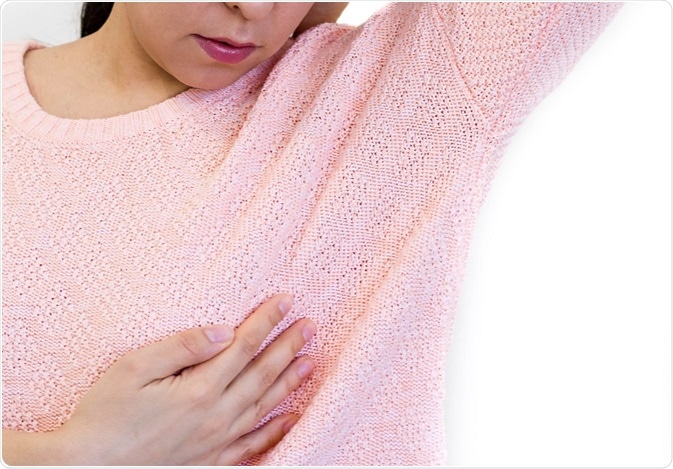 Credit: Elvira Koneva/ Shutterstock.com
In this condition, the breast feels lumpy, rather as if there are cords rolling about under the skin. These cords are composed of hyperplastic nodular or glandular tissue normally found in the breast, and are not a sign of cancer.
Fibrocystic breast changes are not uncommon; in fact, almost one in two women report such changes at some age within 20-50 years. These changes are often most prominent around the time of the menstrual cycle when the periods are about to start, but the timing of symptoms may range from midcycle to premenstrual. The monthly waxing and waning of symptoms related to the breast is a clue to fibrocystic etiology.
Again, postmenopausal women rarely develop such changes unless they are on hormone replacement therapy, because they no longer experience the changes in estrogen-progesterone level that characterize normal ovulatory function.

The symptoms of fibrocystic breasts range from mild breast tenderness or discomfort to significant pain. Other symptoms include breast lumpiness. The most frequently noted area of symptomatic fibrocystic change is the upper and outer quarter of the breast.
Lumps may appear within the breast in the premenstrual phase of the menstrual cycle, only to disappear after the period starts. These lumps may not be always easy to palpate, sometimes seeming to blend with the surrounding breast tissue. Other lumps may also be felt, which are mobile within the breast, not seeming to be fixed to the surrounding tissue, the skin or the chest wall.
Lumps related to fibrocystic breast changes often seem to change size during the menstrual cycle, becoming largest in the premenstrual period and shrinking most during the days after menstruation. These may sometimes be breast cysts which are benign, and which shrink or swell according to the time of the ovarian cycle.

The whole breast or part of it may feel painful and tender. The breasts may also be heavy and full in the second part of the cycle. The pain may be felt in the armpit region.
Some women complain of a dark (brown or green) nipple discharge that does not contain blood. This discharge appears without squeezing and is not related to pressure upon the breasts. A clear discharge is also common.
In most cases symptoms appear in both breasts, though their extent may not be identical.

What are fibrocystic breast changes?

Briefly, changes in fibrocystic breasts include the following:

Fibrocystic breast changes are evaluated to rule out malignancy. Once this is done by clinical examination, ultrasound and/or mammography, with aspiration or biopsy of symptomatic lesions, treatment depends on the extent to which symptoms bother the woman. Large or painful lumps or cysts may be excised or aspirated, respectively. Alternatively, medical treatment could be prescribed, including oral contraceptives or tamoxifen.
The easiest way to deal with fibrocystic breasts after malignancy has been ruled out is to make sure you know what your breast feels like under normal conditions, and to keep checking on them every few months. The tenderness may be so bad as to make contact with even light clothing painful. This may be dealt with by wearing a soft but supportive sports bra on those days of the cycle when the symptoms are bothersome.
Over-the-counter pain relievers such as acetaminophen, or warm fomentation, or ice pack application, are other ways to soothe the pain of fibrocystic breasts.

When should you be concerned?

If a woman finds a new lump or thickening, especially if it is always painful or causing increasing discomfort, it is best to consult a physician. Other indications include persistence of supposedly fibrocystic changes throughout the cycle, or a change in the characteristics of a breast lump already evaluated. A bloody nipple discharge also indicates the need for expert assessment.
Reviewed by Afsaneh Khetrapal Bsc (Hons)