Gene editing is one of the hottest topics in cancer research. A Chinese research team has now developed a gold-nanoparticle-based multifunctional vehicle to transport the "gene scissors" to the tumor cell genome. As the authors report in the journal Angewandte Chemie, their nonviral transport and release platform of gene-editing systems has the additional advantage of combining hyperthermal cancer therapy with genetic modification. 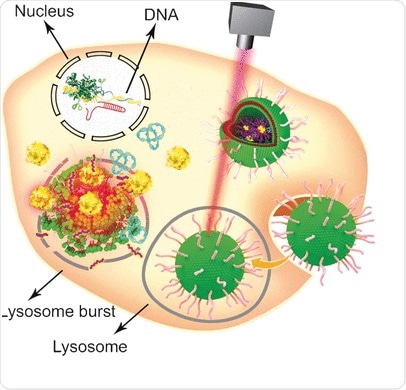 Since its discovery in 2002, the bacterial antiviral defense strategy CRISPR-Cas9 has emerged as one of the most popular genome engineering approaches with wide applications in the fields of molecular biology and biomedicine. Using the CRISPR-Cas9 system, a target gene can be edited, knocked out, or inserted
in eukaryotic cells in a relatively simple and convenient manner. However, one of its weak points is its sheer size, which demands the use of specific nonviral vehicles to deliver the large plasmid to the nucleus. Combining established lipid formulations with gold nanoparticles, Wenfu Zheng and his colleagues from the National Center for NanoScience and Technology, Beijing, China, in cooperation with medical scientists in Japan and China, have found and tested a multifunctional tool based on simple components that effectively delivers and releases the CRISPR-Cas9 system into tumors. Laser irradiation was used to disassemble the lipid-nanogold vehicle after its entry in the tumor cells and enable the CRISPR-Cas9 gene editing. The knockout of the targeted gene then led to apoptosis and tumor growth inhibition.
Gold nanoparticles are especially attractive carriers for various biological molecules because of their easy modification, stability, and light-irradiation response. To convert them into a versatile biological transport and delivery vehicle, the scientists first attached Tat peptides--which facilitate the crossing of the cell nucleus membrane--to gold nanoparticles. Then, the CRISPR-Cas9 plasmid containing the RNA targeting the Plk-1 gene--the knockout of which would severely impair tumor cell function--was attached to the Tat peptides through electrostatic interactions so that they would release their load right after entering the nucleus. Finally, the nanoparticular system was coated with a formulation of lipids to improve cellular uptake.

To test the system, cells and tumor-bearing mice were both administrated with the CRISPR-Cas9-plasmid-carrying nanogold vehicle, and the release of the gene-editing machine was triggered by a laser. "In this study, light irradiation caused the release of the Tat peptide from the gold nanoparticles in a time- and laser-intensity-dependent manner," the authors explained. Other approaches are also possible as they pointed out: as the gold nanoparticles heat up upon irradiation, they could serve as thermotherapeutic agents themselves. In summary, this relatively simple design entailing gold nanoparticles, peptides, and lipids assembled into a sophisticated multifunctional carrier/release system could serve as a multifunctional delivery platform for various aspects of gene therapy.
Source:
http://newsroom.wiley.com/press-release/angewandte-chemie-international-edition/multifunctional-platform-delivery-gene-therape
Publicado por salud equitativa en 7:05