By Jeyashree Sundaram, MBA
Social anxiety disorder (SAD) refers to an anxiety disorder triggered by social situations. People with SAD have symptoms like fast heartbeat, sweating, and stomach upset when they are anxious. They have a fear that people might scrutinize their performance and evaluate them negatively. 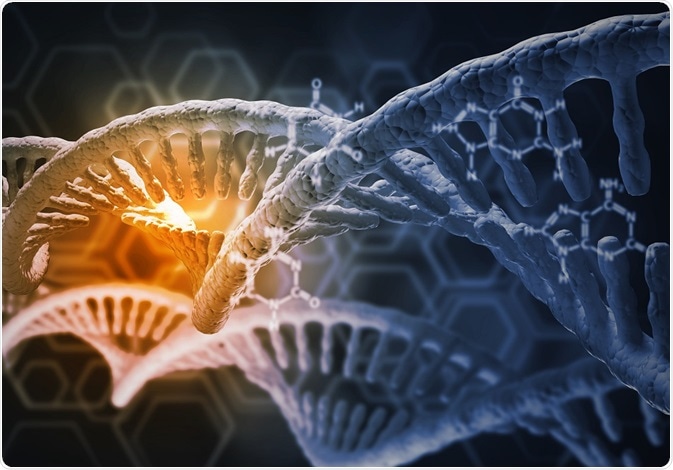 Credit: Khakimullin Aleksandr/ Shutterstock.com
The main causes of SAD are past negative experiences, a new job, and genetic inheritance. SAD often occurs during the stage of early adolescence. This anxiety disorder can be inherited from parents.

A gene is a unit of heredity that gets transferred from the parents to their child or offspring and helps to determine their traits. A recent study was conducted on 1053 parents who were affected by SAD. After thorough analysis, it was concluded that there is a risk of developing SAD for 5 years in the early adolescence stage.
They identified three groups of parents whose offspring were at the risk of getting the disorder. The first group consisted of parents who were not diagnosed with any mental disorder in their lifetime, while the second group had parents who were diagnosed with some mental disorders other than social phobia and the third group included parents who had completed diagnosis of the disorder.
Children of parents who fulfilled the diagnostic criteria of SAD were found to be at a greater risk of developing SAD. The disorder was influenced by the family environment; an adverse atmosphere from inside the family during the developmental stages of a child can contribute to this disorder.
A few other genetics studies were carried out to address the same issue and the researchers were able to find more risk factors associated with hereditary social anxiety.

A number of genes can contribute to SAD:

SLC6A4 gene
SLC6A4 is a serotonin transporter. There is a strong link between SLC6A4 and the chance of developing SAD.  Researchers have demonstrated that within the SLC6A4 gene, single nucleotide polymorphisms (SNP) are responsible for the development of SAD. SLC6A4 is also known as SERT or 5-HTT (5-hydroxytryptamine). Social anxiety disorder may be caused by defect in serotonin processing.
The neurotransmitter serotonin plays an important role in mood. If there is a block of neurotransmitter release, serotonin can become unbalanced, contributing to anxiety disorder and other conditions like depression.
ADRB1 gene
CRF receptor gene
The RGS2 gene also contributes to SAD. As mentioned above, the genes that cause SAD have not yet been fully explored.

The ratio of glutamate to creatine is as high as 13.2% in patients with SAD when compared with normal people. Monoamine oxidase inhibitors, selective serotonin-reuptake inhibitors (SSRIs), and serotonin–norepinephrine reuptake inhibitors (SNRIs) are found to be effective in treating SAD. The symptoms of SAD and abnormalities in brain, such as high amygdala activity, can be reversed using SSRIs.
Reviewed by Catherine Shaffer, MSc