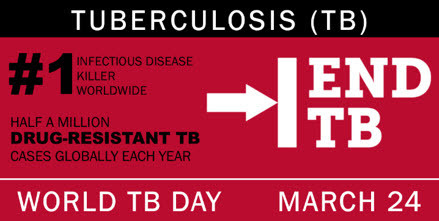 Globally, two billion people are infected with tuberculosis (TB), the world’s leading infectious disease killer.
TB is deadly and it can also be resistant to antibiotics. Each year, half a million cases across the globe are drug-resistant, meaning the drugs used to treat TB will not kill the bacteria. Extensively drug-resistant tuberculosis (XDR-TB) is the deadliest and most dangerous type. It is resistant to at least four of the best anti-TB drugs and has spread worldwide. Now in more than 105 countries worldwide, XDR-TB is at least 20 times costlier to treat and takes more than two years to cure. In most places, less than half of all patients treated are cured, with death rates as high as 80 percent.
On March 24, join CDC and its partners as we unite to end this deadly disease. Help us educate the public about TB and how it can be stopped.
Publicado por salud equitativa en 7:09